MXA RESTORES A 2005 YAMAHA YZ250 BACK TO FIGHTING FITNESS

Do you know what the best-selling motocross bike on planet earth is? If you guessed any of the latest new bikes on the showroom floors, you are wrong. The hot ticket for riders right now are used Yamaha YZ250 two-strokes. The demand for them is incredible. Used YZ250 bike prices have skyrocketed in recent years. Buyers know that a used YZ250 is much cheaper than a new one, and the cost of rebuilding it is a drop in the bucket compared to rebuilding a four-stroke. Everyone should know by now that the brand new 2019 Yamaha YZ250 sitting on the showroom floors and the decade-old YZ250 sitting in someone’s garage are virtually identical. We can’t say buying a used smoker is a bad idea, because it isn’t. New bike costs, particularly four-strokes, are through the roof! If you went back to the 1970s and told Bob Hannah that a new thumper would cost 10 grand, he would think you belonged in the loony bin. Make no mistake about it; $10,000 is a lot of dough, even for people who have money to spare. But for the middle-class racer, it is like asking him to choose between buying a car to get to work and buying a new race bike. And no, he can’t ride his bike to work. Let’s get back on the rails. There are caveats to buying used bikes. There’s always a risk when buying anything secondhand. Having mechanical know-how, or someone with you who does, gives you an advantage when looking over a used prospect before plunking down the cash. An abused smoker can look really good with fresh plastics, new rubber and a can of PJ1 color-match epoxy paint. Trust us; we know. This leads us into our 2005 YZ250 build that started as a rolling chassis and a box of parts.

WE LIKE DEALS, AND A MERE 500 BUCKS SEEMED RATHER REASONABLE FOR AN ENTIRE BIKE—EVEN IF IT WAS IN PIECES. ALL WE HAD TO DO WAS WILE AWAY ENDLESS HOURS IN THE GARAGE, REBUILDING OUR BARGAIN BIKE.

We like deals, and a mere 500 bucks seemed rather reasonable for an entire bike, even if it was in pieces. All we had to do was wile away endless hours in the garage rebuilding our bargain bike. Unfortunately, a low price tag is always a red flag. Are all the parts there? Are they the right parts? Will the bike run once it’s together? Are there damaged parts that will turn your good investment into a money pit? Our 2005 YZ250 falls somewhere in the middle of these potential scenarios. We were happy to get a rolling chassis and a box full of parts for five clams. Even though we knew the cylinder needed some serious TLC, the frame, wheels, carburetor and swingarm would get us our money back if everything went upside down. Restoring an old bike is an exercise in making decisions, lots of them. When we inspected our YZ250 cylinder, we realized that the cylinder was toast. What now? A new cylinder was $509. That’s more than we paid for the bike in the first place. Decision time. Do we part the bike out to get our money back? Do we spend $509 on new parts? Do we try to get it repaired?

We started by sending the damaged cylinder to Millennium Technologies to be stripped, repaired and re-plated to the stock 66.4mm bore. It cost $225 to get the cylinder dialed in. We were okay with that, because it was cheaper than a new one. Next on our YZ250 tour of race shops was to send the cylinder and head to Tom Morgan Racing. Tom is a specialist in getting more power out of smokers. Our only caveat was that we wanted to be able to run pump gas after the mods. The bottom end was still in good condition, so the rod and crank were left alone. For the top end, we went to the Wrench Rabbit website (www.wrenchrabbit.com) to get our Vertex piston (which is a stock replica piston for $129.95) and Hot Rods top-end bearings. We also used a complete Hinson clutch ($1120). That is a lot of money to spend on a clutch, but we know it will last longer than the engine itself and will pay for itself over time. 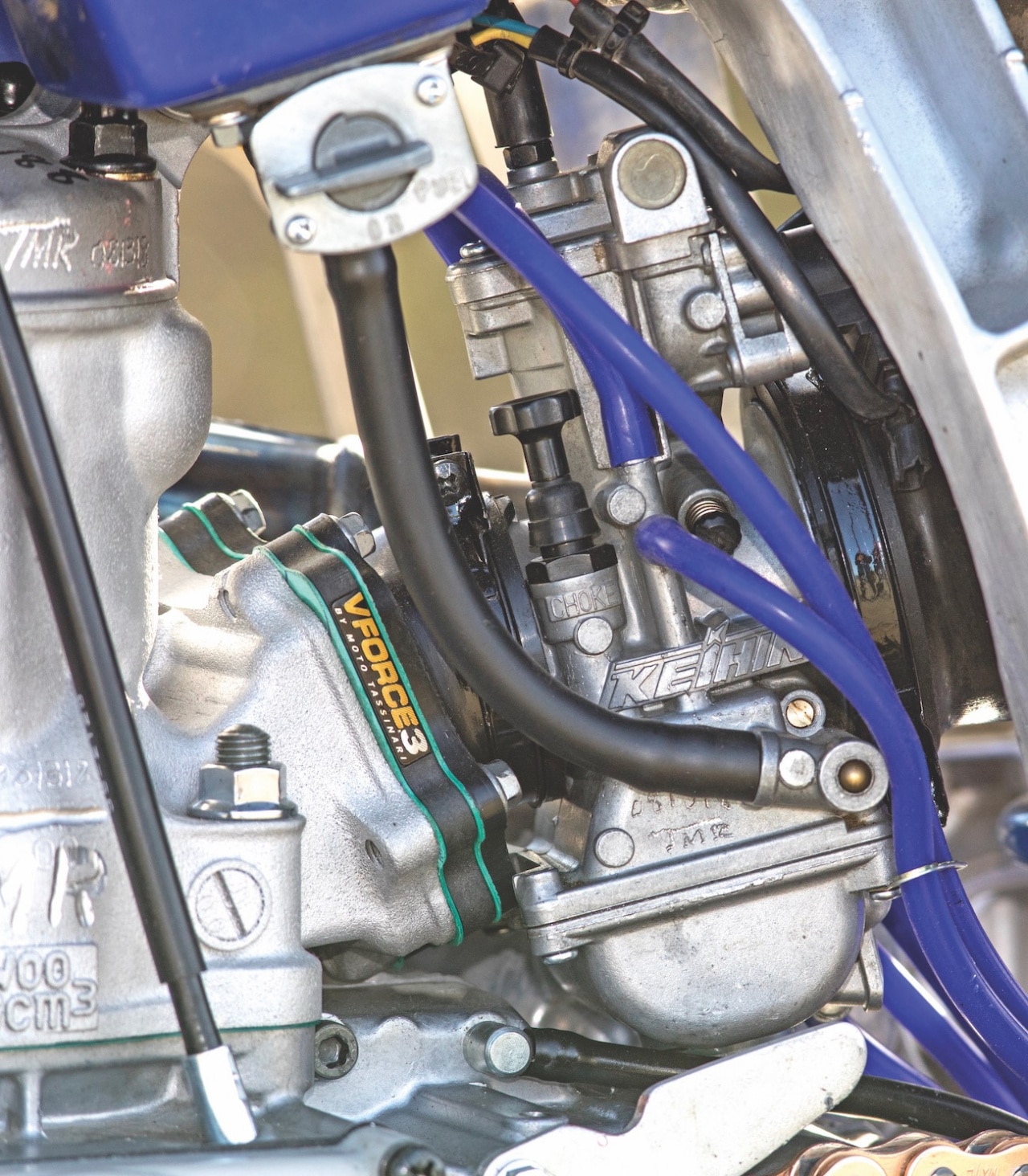 Most of the bearings and linkages were in bad shape. We rebuilt the steering stem ($49.95), linkage ($89.95) and swingarm bearings ($69.95) with Pivot Works kits. The Keihin PWK 38mm carb was gummed up from sitting for a few years. We cleaned it all out with elbow grease, contact cleaner and a toothbrush. The jets were clogged and the O-rings were cracked. The complete carburetor rebuild kit from All Balls Racing had everything we wanted to rebuild the carb for around $30.

The swingarm had a lot of nicks and scratches on it. Mechanically, it was sound; it just didn’t look good. We sent it to a polisher for around $50 who made it look like new again. (And once the polish wears off, we’ll just take some Scotch-Brite to it.) To update the suspension, we found some 2011 YZ450F forks on Craigslist for $300. We sent them straight to Race Tech, who serviced and re-valved them for a Vet Intermediate racer. To allow the forks to fit on the bike, we got Applied triple clamps to make custom clamps for the donor front forks and updated fender fit with the proper steering stem.

We used a Polisport restyle kit to make our 14-year-old Yamaha look new, while Bolt Hardware helped us replace the bolts that were missing or roached. We didn’t trust the ancient radiators. They were a little warped. We sent them to ICW Radiators to be straightened and checked for leaks. Faster USA Cerakoted the brake calipers and a few other parts for a factory look. Of course, we ordered all-new custom graphics from DeCal Works ($269.90) to bring the YZ250 back to life.

IT ALWAYS SHOCKS US WHEN WE GET ON A 14-YEAR-OLD YZ250 AND REALIZE
THAT IT IS HARD TO TELL IT FROM A NEW ONE OFF THE SHOWROOM FLOOR. YEAH, YEAH, WE KNOW WE SPENT OODLES OF MONEY ON

THIS IS THE BUILD THAT WAS

It always shocks us when we get on a 14-year-old YZ250 and realize that it is hard to tell it from a new one off the showroom floor. Yeah, yeah, we know we spent oodles of money on this build. How much did we spend? Around $6500, including what we paid for the bike. Having said that, you don’t have to do everything we did. We could have knocked off about $3000 in parts and still had a really nice, raceable Yamaha YZ250; however, when we were done getting our $500 bike back to its basic racing form, we wanted to find out how it would be with Tusk wheels, Scar titanium footpegs, Works Connection goodies, and an FMF pipe and silencer. In truth, we could have skipped having Tom Morgan Racing work on the engine. We didn’t need to add extra stuff to this bike in order for it to run well. If we just added the necessities, it would have cost around $3500 to build. But, no matter how you slice it, $6500 for a totally rebuilt, no-expense-spared Yamaha YZ250 is still $900 cheaper than $7399 (plus fees) for a new one.

On the track, this old dog taught us a few new tricks. The powerband felt a lot like the 2019 KTM 250SX with more over rev. It came on super smooth, hit hard in the midrange and had decent top-end pull thanks to the Tom Morgan Racing handiwork. Had we gone for a race gas engine, Tom could have given us a lot more of everything, but we were happy with the low-end grunt that could pull a gear higher in the corners. Since we bought a 2005 YZ250 two-stroke, we didn’t get the Kayaba SSS suspension that came stock from 2006 on up. And, finding good, used YZ250 SSS forks is a nightmare since every KTM owner with WP 4CS forks snapped up the supply. But, surprisingly, you can find a plethora of late-model Kayaba YZ450F four-stroke forks on the used-bike market (and Applied can make any fork fit on any bike with its triple-clamp know-how.) The suspension on our 2005 was as new as we could get it, and the Race Tech setup was spot on. The forks kept the front end higher in the stroke and made the out-of-date steel chassis a dream in the rough. The rear tracked well and worked in unison with the forks. We loved it.

We have to stop trying to rebuild our favorite old-school two-strokes from parts out of a cardboard box. Buying a box of parts isn’t like buying a box of chocolate. You really don’t know what you are getting (and there is no map under the foil wrapper telling you which ones are raspberry truffles). We took the risk, and even with our expertise, there was no way we could know how it would turn out. We like to think that if the price is right, we can always break even selling the parts; however, that would mean that we were smart enough to stop before we got in too deep. On this build, we made all the right choices and contacted the perfect people, even if we went a little over the top. When it was done, we had a classic, steel-framed Yamaha YZ250 with great suspension and a smokin’ engine.