Roczen’s KTM 450SXF powerband was like Dr. Jekyll and Mr. Hyde. From the bottom through the midrange the engine was powerful yet manageably smooth. However, as the rpm climbed, the engine became scary fast. It took a rider with gumption to effectively use the entire power spread.

Swagger, speed, aggression—words that aptly describe Ken Roczen’s riding style. The German became an overnight hit in the United States. Much like “Beatlemania” some 50 years ago, Roczen makes women swoon (check out his Instagram feed if you don’t believe us). Tween boys want to emulatehim, not only due to the attention he receives but for his ridiculous skills on a dirt bike. Older generations—that is, those without Twitter, Instagram, Facebook, Snapchat, Tumblr, etc.—appreciate his candor. It’s remarkable that a kid from the other side of the planet had to learn English, adapt to a dissimilar culture, and yet he provides better sound bites than his American competition.

Emergent, energetic, committed—words that effectively describe KTM’s racing program. With roots in Austria, a team manager from Belgium (Roger DeCoster), one rider from France, another from Germany and a third from Minnesota, KTM is a melting pot. They have assembled one of the premier and perhaps most complete race teams on the circuit. It’s laughable to think that only a few years ago the orange brand was considered a last-ditch destination for aging riders looking for one last shot on the gravy train. Those days are gone. Ryan Dungey, Marvin Musquin and Ken Roczen have proven that KTM is a winning brand. Roczen’s mechanic, Kelly Lumgair, keeps a watchful eye on the Hinson clutch, and for what he can’t watch over, he depends on an Akrapovic engine guard for peace of mind. We liked the bright orange frame that the factory bikes are festooned in, but that’s because we are particular to orange.

KTM deserves a round of applause for what they’ve managed to do in such a short time frame. They snatched up Roger DeCoster at the end of 2010, brought Ryan Dungey on board in 2012, and farmed Musquin and Roczen from the Grand Prix circuit. In the past couple years, KTM garnered the 450 National Championship and 250 West Supercross title. Only Kawasaki and Honda have been more successful in that span. KTM has climbed the ladder of superiority in the rank-and-file world of professional racing.

The Austrians made two excellent moves in the summer of 2012 by re-signing Roczen and Musquin through 2014. KTM didn’t have to engage in a bidding war for the services of Kenyn or Marvin (the same can not be said for Roczen’s services in 2015—when he will be going to RCH Suzuki). That’s a tremendous advantage given that Roczen has moved up to the 450 class for this year and needed extra time adapting to the new bike. Ken Roczen spent the winter of 2013 testing on the KTM Supercross track as opposed to testing the open market. And it paid off as Kenny won a couple Supercrosses and clinched the AMA 450 Nationals Championship at the final round in Utah. Roczen’s power preference is the opposite of Justin Barcia’s. Ken keeps the rpm low instead of bouncing off the rev limiter. Ken shifts back and forth between second and third gear for the triples and rhythm sections, opting to use fourth only in longer whoop sections. You’ll note that Roczen’s engine doesn’t look very trick from its outward appearance. It’s what’s inside that counts.

The MXA wrecking crew is nothing if not bold — so, several months ago we asked KTM to give us Ken Roczen’s KTM 450SXF. They could have said no, and they have told us no in the past, but Roger DeCoster and Jody worked out an arrangement that didn’t interfere with Ken’s schedule and it wasn’t long before we met with Roczen’s mechanic, Kelly Lumgair, and gleefully started the KTM 450SXF with the press of a button. A crack of the throttle revealed Ken Roczen’s secret 450 weapon. The rest is history—Ken has won the 2014 AMA 450 National Championship in his debut year in the 450 class. What follows is a photo essay and video on Kenny’s big Katoom. Factory race teams spend the majority of their time at the track dialing in suspension. Catering to a rider’s needs builds both his confidence and speed – two vital components. Ken Roczen uses a spring shock absorber, but he did try to race with WP air shock at the first race of the year, but went back to the spring version. KTM has the best brake components on the market, so why would Roczen need a works front brake with a massive Brembo master cylinder and oversize Moto-Master Flame rotor? It’s all about modulation. Ken isn’t tough on the front brake, but he has the option of dragging it through corners or stopping on a dime. This brake setup was very impressive without being overwhelming. Ken Roczen’s drivetrain is different from what the average Joe can purchase. Although he relies on Renthal sprockets and a D.I.D. chain, Roczen has a vast array of custom-made internal gear ratios. The choices allow Kenny to ride in his most favored part of the powerband—the low to mid. Ken Roczen carries momentum through the turns and puts massive load on the front end. Even at a light 160 pounds, Roczen hits obstacles with such force that his forks need to be stiff. However, the 50mm WP units had very good rebound damping through small chop. The MXA test riders loved K-Roc’s fork settings. In motion, the KTM 450SXF was impressively stable, and with such a powerful engine, the MXA test riders could jump distances they would otherwise think twice about doing. The WP Trax shock did a great job of absorbing impacts without reacting wildly. The dead feel made seat bouncing a chore, but that makes sense given that Roczen often refrains from loading the shock. Given that Roczen’s KTM 450SXF must pass the FIM/AMA two-meter-max sound test (currently set at 112 dB), Akrapovic is limited in what can be achieved horsepower-wise and still remain quiet. More than just bling, the orange anodized Kite hubs are stronger and lighter than stock. The demands of AMA Pro racing make durability a top priority. The Kite hubs and D.I.D. DirtStar LT-X rims ensure that the wheels stay round, despite the loads caused by pounding through whoops. 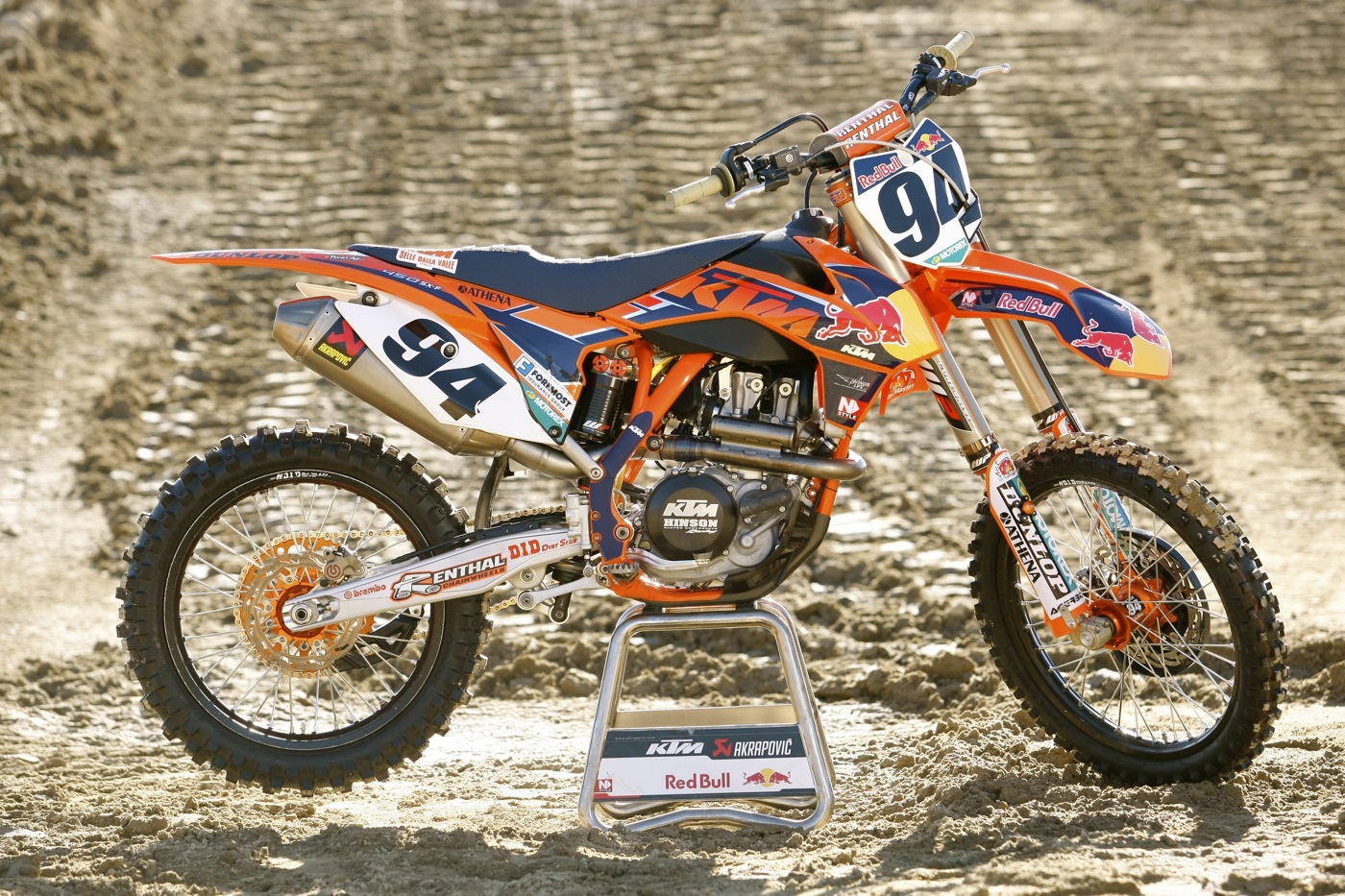