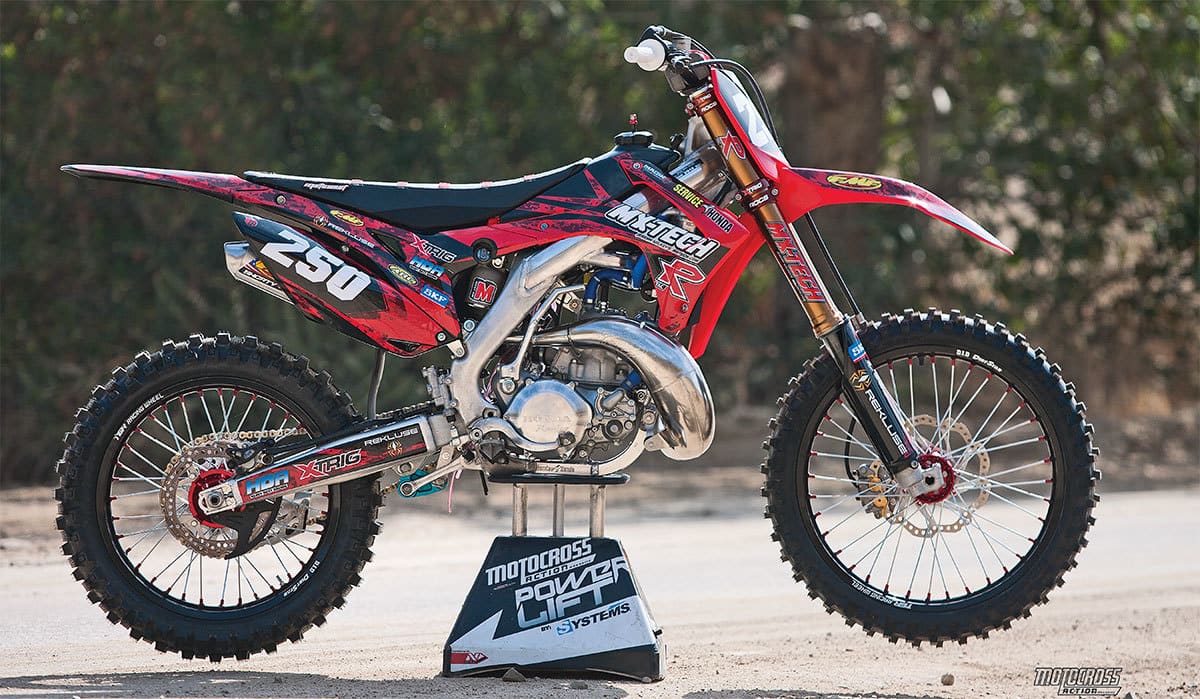 Building a new-age Honda CR250 two-stroke from the ground up is a lot like going on a treasure hunt. You have a weather-worn map to direct you, but the hunt could quickly turn into an Indiana Jones adventure at any given moment. No matter, you are compelled to risk it all in search of hidden treasure. Of course, you can always fall back on the old-timers, the grizzled prospectors from the two-strokes days, to give you tips and advice. Plus, the path you must follow is not untrodden—many have come before you, each one leaving a breadcrumb trail to guide you on your journey. One such intrepid CR250 adventurer is Jeremy Wilkey, the suspension guru of the Midwest. Jeremy’s trek to CR250 nirvana involved a little bit of luck, some misfortune, hard-earned experience and considerable ingenuity.

Come with us now as we follow MX-Tech’s Jeremy Wilkey on his quest to build the perfect Honda CR250 two-stroke.

WITH A LITTLE LUCK CAME MISFORTUNE

The hardest decision for any CR250 project bike builder is which Honda powerplant to use. The obvious choice for the majority of two-stroke aficionados would be the most modern technology on the market. But, considering Honda’s history, that’s not always the best choice. When Jeremy joined forces with engine builder Pete Payne of HDR, the first discussion they had was which Honda CR250 engine to base their project on.

As many before them found, the 2001 Honda CR250 engine was the best of the bunch. The simple design of the 2001 CR250 engine offered a more usable and broader powerband without giving up any peak horsepower to the high-tech, electronic power-valve-equipped 2007 engine. Hold on; shouldn’t high-tech mean better, not worse? Not if the technology wasn’t fully matured. This was the case with the 2007 engine and the poorly configured case-reed engines of 2002 on up. The modern CR250’s trick electronics were still in their infant stages of development a decade ago. How can old be better than new? It happens all the time. Do you remember when fuel injection first hit the four-stroke motocross market? Every bike made less horsepower during the infancy of fuel injection. Perhaps, had Honda kept making CR250 engines past 2007, they would have evolved into something awesome (as the modern EFI four-stroke has). But Honda pulled the two-stroke plug, making the older engines, especially the 2001 mill, the best starting point for the hardcore Honda CR250 project builder.

But, finding a rare 2001 CR250 for a reasonable price in good condition is like finding an honest man in Congress. Low supply and high demand have resulted in a seller’s market. MX-Tech scoured the globe until they found a gem on eBay. According to the description, it was in good running condition, and the photos showed a fairly well-kept machine. A reasonable $1400 later, the goods arrived. Upon initial inspection, however, Jeremy and Pete were shocked to find a hole in the piston. They thought they were getting a diamond in the rough, but got a cubic zirconia instead. Luckily, the cases and cylinder were in good shape, and a new top end had been on the list from day one. Pete went to work rebuilding the tired engine from the ground up. He ported the cylinder and sent the crank to Crank Works to be balanced to reduce the vibrations. There are a lot of two-stroke engines that have been stuffed into new-age aluminum frames. Many of these bikes have questionable origins and shaky engineering—you don’t want a frame that was cut and welded by a guy who bought his torch the day before. However, located just across the way from MX-Tech’s Illinois office is A.J. Waggoner from Service Honda. A.J. has two decades of experience under his belt building special aluminum-framed projects. It was a simple decision for MX-Tech to trust A.J. to shoehorn the 2001 engine into a 2015 CRF250AF chassis. The four-stroke engine was removed, and when A.J. was done, the 2001 two-stroke powerplant fit like a glove. Are we saying you have to find a used CR250 engine, order all the parts to rebuild it, buy a used Honda CRF250 and then pay Service Honda to mate the two together? Yes and no. On the no side of the equation, Service Honda can handle everything from the git-go. They specialize in building exotic, aluminum-framed two-strokes as complete machines. All you have to do is write a check for $13,499. On the yes side of the deal, if you bring your own engine and chassis to Service Honda, the price will vary. Either way, deep pockets are required.

Now that the engine had found a cozy home, it was time for MX-Tech to do its thing. In MXA’s testing experience, the Service Honda AF’s handling has been an issue. Some bikes and engine combinations are great and some are lackluster. The challenge for MX-Tech was to pull all the pieces together. First, they had to find the right frame geometry. To do this, they used a Merge Link Knuckle that stabilized the rear end without compromising steering; however, the forks were the key ingredient to making real magic. MX-Tech took the CR250 forks and reworked them with their TAC-R system. This ingenious design takes the hyper-progressive nature of air forks and makes them feel like coil-spring forks. Why not just use spring forks? Because air is light. If MX-Tech could get the performance of air to stand toe to toe with coil springs, then air forks would win every time—as you’ll save several pounds. That’s a big difference.

How does MX-Tech make air forks feel like coil-spring forks? They alter the rate at which the volume changes are occurring inside the fork. This is done by adding a high-pressure region in sequence with the main air volume. This creates a more tunable fork with a more linear profile. The system has low-, mid- and high-pressure air adjustments.

All that sounds very technical, but how does it really work? As the fork moves through its stroke, the air pressure inside the fork increases dramatically. If kept contained in the fork legs, the pressure would ramp up rapidly at the end of the stroke and produce an incredibly harsh feel. To stop this from happening, MX-Tech borrows some technology from the 1976 Yamaha Speedo-and-Tach air forks. These long-forgotten air forks used a canister-style fork cap that acted as a second air chamber with a separator piston inside to vary the size of the fork’s air volume. MX-Tech mimicked the concept by designing a new fork cap that extends 80mm into the fork leg. It, like the 1976 fork cap, has a separator piston that moves upward as the pressure rises inside the fork. This changes the air volume in the lower chamber as the separator piston moves. In layman’s terms, you have a dual-stage air fork. It’s ingeniously simple, and it works like a charm.

The MX-Tech TAC-R system costs $325 and can be installed by anyone who is mechanically inclined. MX-Tech offers how-to videos to guide you through the process, or they will do the job for $500. On top of the TAC-R system, both the front and rear components were re-valved to work in unison. The forks were finished off with Kashima-coated outer tubes and DLC-coated lower tubes to reduce friction. The shock included MX-Tech’s two-way sub-valve-style compression adjuster.

Believe it or not, MX-Tech drove all the way from Illinois to SoCal to have the MXA wrecking crew test the 2001 Honda CR250—or is that a 2015 Honda CR250 with a 2001 engine? Either way, we were glad to put our test riders on something as uniquely engineered and suspended as this gem. On the track the MX-Tech CR250 had very little vibration at the handlebars—a sign that HDR’s Pete Payne and Service Honda’s A.J. Waggoner had done their jobs well.

The bike handled with precision and tracked straight as an arrow. The suspension came to life within a few clicks. The top of the stroke was plush and had a very linear feel as we got down in the travel. It had supreme bottoming resistance that we didn’t have to worry about when over-jumping or on hard hits. Of course, the fact that we had three air valves accessed by a special fitting made finding the right settings somewhat confusing, but the ability to fine-tune the complete stroke of the forks by altering the interaction of the main, balance and separator chambers produced an air fork that eliminated the dreaded ramp-up effect of the air pressure’s J-curve.

At first, the 2001 engine was too easy to ride. The test riders didn’t feel that it had the kind of gusto they expected from a fully built 250cc two-stroke. MX-Tech was ready with a map change for the Vortex ignition and an added tooth for the rear sprocket. These simple changes made a world of difference, allowing the engine to pull a higher gear and deliver an exciting midrange hit.

Overall, this bike handled better than most 2017 models on the market today. It has all the modern accoutrements with the cache of an iconic two-stroke engine from a brand that stopped producing smokers a decade ago. Of course, it should be noted that Jeremy Wilkey spent more money on his CR250 than he would have for a brand-new 2017 race bike, but this is more than just a bike; it’s an adventure. It brings back memories of a time gone by without the hassles of vintage iron. If your goal is to have fun, this is a terrific package. MX-Tech and Service Honda did a great job of resurrecting an old warhorse and turning it into something unique and valuable.

TWO-STROKE TEST: WHAT IT’S LIKE TO RIDE THE KX500 BEAST