WE RIDE THE SERVICE HONDA KX500AF (ACTUALLY WE HAVE CHUCK SUN RIDE IT): From my personal motocross experience, big-bore 500cc two-strokes trigger deep emotions. First of all, a 500 championship was what all aspiring riders strove to achieve during my teenage years. And the 500 Nationals were the best place for a privateer to try to defeat the factory riders. Back in the day, when I entered the Trans-AMA International class on my 360 Husqvarna, I could earn more money by placing in the top 15 than by winning the 250 support class. A starving privateer could line up against a factory 500 and believe that a holeshot was within the realm of possibilities. In fact, I did get the holeshot in the 1975 St. Louis Trans-AMA, only to fall in the second turn and get run over by everybody! But not all riders embraced these 500cc monsters. After Johnny O’Mara’s first 500 ride, he said he would rather eat a cow pie than ride that thing!

Sadly, in 1993, we, as in the collective we, heard the last breath of the 500s as Mike LaRocco took the final AMA 500 National Championship.

NOW, 16 YEARS AFTER THE LAST COMPETITIVE AMA 500 NATIONAL, I JUMPED AT THE OPPORTUNITY TO EXPERIENCE THE POWER OF A SERVICE KAWASAKI KX500AF?WHICH IS A BRAND-NEW KX500 ENGINE TUCKED INTO A HEAVILY MODIFIED KX250F ALUMINUM FRAME. I GOT THE BIKE FROM THE MXA WRECKING CREW AFTER THEY HAD BEEN TESTING IT FOR TWO MONTHS.

Now, 16 years after the last competitive AMA 500 National, I jumped at the opportunity to experience the power of a Service Kawasaki KX500AF?which is a brand-new KX500 engine tucked into a heavily modified KX250F aluminum frame. I got the bike from the MXA wrecking crew after they had been testing it for two months. Their impression was that it was a bike that didn’t like to turn, with unbalanced suspension and power just this side of unmanageable. MXA handed it over to me, with the blessing of A.J. Waggoner of Service Honda, to finalize the setup and race it in the L.A. Sleeve Two-Stroke Challenge at the Glen Helen National. After riding the box-stock KX500AF for just a lap, I wrote up a list of a dozen changes that I thought it needed. And I knew just the man to help sort out my issues?Dick Wilks of MX1 Suspension in Roseville, California. Dick had helped me with both my Hondas and KTMs over the last few years, so I handed him my list and we set about ironing out the trouble areas.

Powerband: The KX500 engine’s power came on like a kicking mule with a very potent punch. We shortened the muffler by four inches and got immediate results in the low end. We enhanced the control of the bottom by installing a VForce3 reed cage. It not only made the transition off the bottom better, but it cleaned up the powerband throughout the range (without the uncontrollable hit).

Gearing: Even after raising the gearing from a 14/47 to a 14/44, there was more than enough power to pull the tall gear ratios. Because of the brute force of the big two-stroke engine, we opted to use Supersprox sprockets. They have an aluminum carrier with steel teeth.

Wheelbase: I was pretty sure that the swingarm was too short for such a powerful engine package. Short of a new swingarm, we moved the rear wheel back a full inch to create a more predictable feel when exiting turns (as well as placing more weight on the front to help cornering). Once the wheel was as far back as we could get it, there was no room for chain adjustment, so we opted for the RK MXU Sealed Ring chain with a 9000-pound tensile strength. This super strong chain meant less stretching and a longer life. Forks: A lot of the KX500AF frame’s cornering issues were caused by insufficient low-speed damping (insufficient for a 500cc engine, but not for a much mellower 250 four-stroke). MX1 increased initial low-speed compression damping to achieve a higher ride height, which allowed me to turn under diesels at will. MX1’s fork revalve eliminated the midstroke spike, but could handle bottoming resistance with ease while still using the standard fork springs. Increased rebound settled down a busy front-end without packing on downhills. The MX1 fork revalve cost a modest $195.

Accouterments: Spider grips made a contribution, deflecting vibrations with their unique dual-density rubber. I also found confidence in the wider platform of IMS pegs over the skinny stockers on the KX250F. In order to get the beast to hook up, I ran Dunlop 756 tires front and back (a 120-width on the rear with the new Tubliss system). The Tubliss system eliminated the chance of pinch flats on the rugged Glen Helen course and allowed me to run a ridiculously low nine psi in the rear tire.

Riding style: There are big differences between riding a big two-stroke and a big four-stroke. Unlike a four-stroke, where you must stay on the throttle all the way to lift off on a jump face, a 500 two-stroke can launch the front end into the next hemisphere unless the rider’s weight is far forward.

Riding a 500 that weighs 225 pounds (thanks to the modern aluminum frame) is really a dream for a long-time 500cc two-stroke rider like myself. I would constantly find myself challenging the bike and my nerve by holding it wide open and railing berms a gear high?sometimes with a bit of clutch, and always with a lump in my throat. 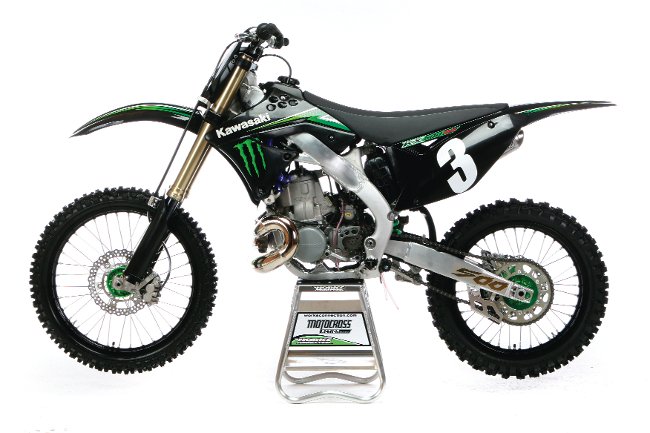 IF YOU PUT A 21-YEAR-OLD CHUCK SUN ON THE SERVICE HONDA KX500AF (WHICH IS HOW OLD I WAS WHEN I WON THE 1980 AMA 500 NATIONAL CHAMPIONSHIP), I THINK I COULD HAVE WON THE 2009 GLEN HELEN NATIONAL?AND I’M NOT TALKING ABOUT THE TWO-STROKE CHALLENGE.

It takes more energy to hang on to a 500cc two-stroke, but what a ride! At the amateur portion of the Glen Helen National, I raced the Over-50 Experts, Over-40 Experts and Over-30 Experts in preparation for the L.A. Sleeve Two-Stroke Challenge. As it turns out, the two-stroke race was relegated to the last race of the National program (because of some teething issues with the new sanctioning body). Many of my fellow two-stroke competitors dreaded the idea of being the last race of the day, but I could only think of how cool it was to ride a National track at the end of the day. It was nasty rough. I enjoyed myself and was definitely the fastest rider in the race over the age of 50. But apart from a good start, I settled for a 16th overall.

The million dollar question: Can I go as fast on the Service Kawasaki KX500AF as a I can on a modern 450 four-stroke? Yes?at least for a few laps. Could I win on one? I did win my class at the amateur portion of the Glen Helen National and made the top five in the younger age groups. And if you put a 21-year-old Chuck Sun on the Service Honda KX500AF (which is how old I was when I won the 1980 AMA 500 National Championship), I think I could have won the 2009 Glen Helen National?and I’m not talking about the Two-Stroke Challenge.

2009 AMA 250/450 NATIONAL DVD: Relive All The Great Moments From Last Season; Your Chance to See All the Tracks, Riders And Drama

BRIAN GRAY, 2003 AMA ROOKIE OF THE YEAR INJURED: Now An Ambulance Driver, Gray’s Ambulance Was Involved In A Fatal In a Two-Car Accident