WE RIDE THE “WE REWARD” SUZUKI RMZ-450: A FULL RACE MOTOCROSS BIKE WITH A TWIST With each new medium of information comes new opportunities for marketing, and believe it or not, computers are yesterday’s news. Cell phones with web browsing, GPS and many other impressive applications are literally attached at the hip of many Americans. “ WeReward” is a free application that anyone can download to their iPhone, Android or Blackberry that pays points when you go to certain business locations or perform tasks. The tasks can even include taking a photo of yourself with a product or leaving a comment or suggestion on a website.

Businesses get promotion and feedback, and participants get points that they can turn into cash through a PayPal account, each point being worth a penny. Best of all, the first 100 readers who sign up at www.wereward.com and complete the Motocross Action task will receive 1295 points. This is a huge bonus over what most tasks pay.

As new 2011 motocross bikes were en route to the U.S., everyone was chomping at the bit to get their hands on the new hardware. Aftermarket companies need to get the bikes with new parts in order to develop their own modifications. The cost of buying a new bike just for a few parts would be exorbitant, so a group of aftermarket companies came together and agreed to split the cost of a shiny new RM-Z450. At the time, brand-new 2011 RM-Z450s were difficult to find in dealerships, but Clawson Motorsports in Fresno, California, was among the first to have the new Suzukis available in their area. The group bought the bike, took the parts they needed to spec, and began their R&D. You may have never heard of WeReward, but they commissioned the RM-Z450 to reach the motocross demographic.

After the group of aftermarket companies finished their development work, the bike was sold to WeReward. Wanting to promote their program in the action sports realm and to the action sports audience, WeReward decided to build a project bike RM-Z450. When they approached MXA with the project bike, we were glad that an outside sponsor took interest in our sport, and we were even happier to see that the bike was heavily modified with a ton of trick parts. The 2011 RM-Z450 impressed the MXA wrecking crew, but there were still plenty of areas with room for improvement. The WeReward project bike had some promising modifications that we hadn’t yet tried. So, WeReward left the bike with us and we started testing.

SHOP TALK: WHO DID THE WRENCHING?

Yoshimura and Suzuki have a long-standing racing relationship. Yosh often receives new Suzukis long before dealers and even before magazines. One would assume Yoshimura’s Suzuki stuff would be outstanding. The project bike got Yosh’s stage three modifications, which include intake and exhaust cams, head porting, a CP piston for slightly higher compression, and ISF transmission servicing. The Isotropic Surface Finish process involves deburring many of the tranny gears (including the input shaft, output shaft, shift fork, and shift drum) in a big tumbler. The result is more power and improved shifting feel. This is a very attractive mod, because the stock RM-Z hates to be shifted under a load.

Yoshimura also equipped the bike with their brand-new carbon fiber RS-4D exhaust system. We got a lot of questions about this bike in the pits, and almost all were about the muffler. No, the muffler doesn’t have two cores, just two separate holes at the outlet. The combined area of the two holes is larger than the traditional design. Yoshimura claims the design achieves more flow, and that although it doesn’t show on the dyno, it improves low-to-mid throttle response and feel on the track. Yoshimura dyno tuned the bike with their PIM device to get just the right amount fuel delivery on 92-octane pump gas. They reported solid gains across the board, but only modest (about two and a half ponies) at peak.

On the intake side, the Yoshimura-tuned engine was aided by a Twin Air filter and Injectioneering throttle body modification. Twin Air supplied a Dual-Stage filter to help air flow. Injectioneering changed the angle of the butterfly, taper bored the body to change the capacity of the airflow, and modified the throttle shaft to help it maintain proper calibration.

A pumped-up powerplant always places more demand on many parts of the motorcycle. The OEM clutch struggles to handle the power of the unmodified RM-Z450. It would be a short fuse if it was mated to a built motor. The WeReward RM-Z was equipped with a full Hinson clutch, including the basket, inner hub, pressure plate, clutch plates and springs. It was actuated by a Works Connection perch and lever.

Factory Connection was called in to take care of the suspension. They stuck with the stock fork spring rate and lowered the rate of the pressure spring. The goal was to let the forks settle into the stroke and feel plusher over small bumps. With valving, they increased low-speed compression damping, decreased high-speed compression damping, and decreased the low-speed rebound damping to prevent packing. The forks also got Factory Connection’s Works Oil Lock Collars to add more bottoming resistance.

With the shock, Factory Connection always likes to use their High Speed Compression adjuster spring, which is 20-percent firmer than the OEM spring. Their strategy is to improve performance at high shock shaft speeds, then run more race sag to get a plusher overall feel. They also modified high- and low-speed compression damping to try and achieve a fluid feel through the stoke and better bottoming resistance.

The forks were mounted to some very trick German triple clamps. The X-Trig clamps can be adjusted to either 18.5mm or 21.5mm of offset by rotating the steering stem 180 degrees. With three mounting holes in the top clamp and several different spacer options for height, the clamps boast 12 different mounting positions. There are optional bar mounts with rubber on the handlebar clamping portion of the mount versus the traditional rubber between the mount and triple clamp. Although the Suzuki RM-Z450 is not svelte, it feels light because of its very quick geometry. Once you have the suspension dialed in, it will go wherever you point it.

The WeReward RM-Z wheels were actually the OEM units, having undergone TCR’s Racer Package servicing. TCR turned down and polished the hubs, and polished then anodized the rims before relacing and truing. Buying wheel components that are as good as the OEM’s would break the bank. TCR tricked out the stock stuff for $500. Attached to the wheels were Moto-Master brake rotors (the front being an oversized 260mm unit) and Pirelli tires. The rear was a Mid-Soft in a 110 size, while the front was Mid-Hard in an 80 size.

Pro Taper outfitted the project bike with sprockets, handlebars (the Kevin Windham bend is a favorite among taller riders), grips, grip doughnuts and a throttle tube. Stomp supplied a seat cover with gnarly plastic knobbies on the sides for grip and durability.

Red Faction MX radiator hoses, a LightSpeed skidplate/engine guard and red Yoshimura oil and timing plugs draw the eye to the engine, add to the bling factor, and provide some level of function. The custom Oneighty graphics call out the sponsors and complete the look of the race bike. 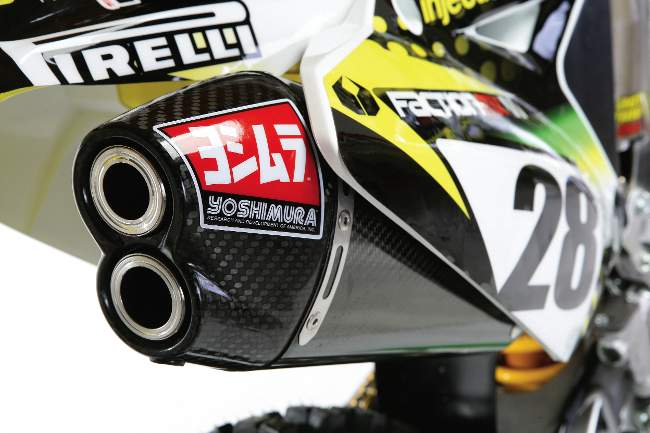 The WeReward RM-Z450 engine was hard hitting. Cracking the throttle was like spurring a wild bronco; we had to be ready and hang on tight. The sweet spot of the powerband was in the midrange, but without much overrev the bike rushed through the powerband quickly and signed off. Luckily, Pro Taper was kind enough to supply us with a smaller rear sprocket. The taller gearing mellowed out the hit and let testers use the breadth of the powerband. In many situations, the bike offered enough torque to shift up and grunt through sections with the tractable part of the powerband. The bike would respond almost as quickly chopping the throttle as when opening it, as it had some extra compression braking. Testers were quite happy with the power, until we told them how much work went into the engine. We expected a little more peak power out of a stage-three kit.

Factory Connection’s suspension was well tuned but slightly soft for our tastes (our setup is one spring rate firmer on both the front and rear). The handling of the RM-Z is very sharp. For those who want to tune out some of the oversteer, Factory Connection’s increased sag shock strategy is a good one. The forks had a very smooth, consistent feel all the way through, but to keep a stable bike attitude and prevent the front end from diving with the Moto-Master oversize front rotor, we turned in the compression a few clicks and slid the forks down in the clamps. The shock handled bumps under a load with ease on the compression part of the stroke, but kicked slightly on rebound. We turned the rebound clicker in and were pleased with the performance.

The standout modifications to the bike were definitely the ISF transmission coating and the Hinson clutch, which were crucial to actually being able to use the bike’s power. The stock RM-Z450’s shifting is poor enough to make grown men throw hissy fits, and the increased power of a project bike would normally exacerbate shifting problems. With this bike, however, we never missed a shift. Hinson’s clutch pack was the other rags to riches component and was only marred by the suspect leverage ratio of the Works Connection lever. Finally, the Stomp seat cover helped glue riders to the bike.

The WeReward Suzuki RM-Z450 received more attention than some top race bikes, and with some more tuning and tweaks, the bike could be a real monster. We would go to firmer springs, and seek more peak horsepower on this project. The big accolades for bike-specific mods go to Yoshimura’s ISF transmission service and Hinson’s clutch. Overall, WeReward went whole hog on the bike?it showed in the graphics and in performance.