If haven’t never heard of Valentin Teillet you soon will. The French rider has been riding for the Bud Racing team racing on the Grand Prix circuit for some time now. As with most young French riders, the 23-year-old Valentin has always had the dream of racing the AMA Supercross series. But, as a up-and-coming 250 Grand Prix rider, on a French team, which races with Kawasaki backing, Teillet’s dream didn’t fit into the grand scheme of things. But then, things changed. First, Valentin turned 23. Normally this would be reason for a birthday party and little else, but on the GP circuit when you turn 23 you are no longer allowed to race in the 250 class. Second Bud Racing wasn’t happy with the direction that the whole Grand Prix system was headed. What with Youthstream’s greedy fees and the many fly-away races to Qatar, Thailand, Brazil and Mexico, racing the GPs was incredibly expensive for a small team. Third, Bud Racing wanted to expand their aftermarket and hop-up business to the United States. 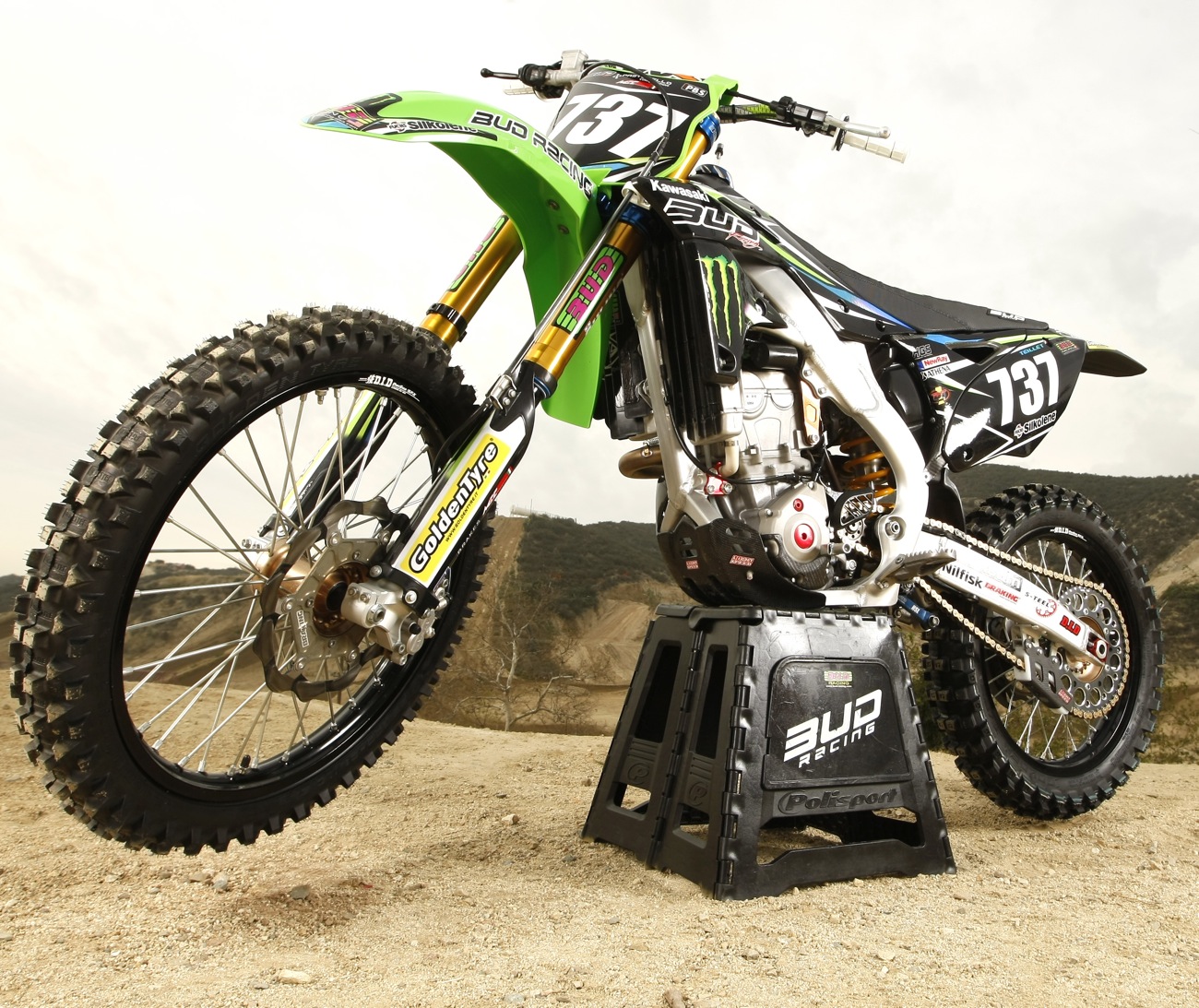 These three forces combined into a creative idea—Bud Racing would open a race shop in SoCal, quit the Grand Prix series and bring Valentin Teillet from the FIM to the AMA. And, shockingly, Bud Racing believed that the whole enterprise would not only cost less than racing the GPs, but it could pay for itself. Thus, Valentin Teillet got to live his dream of racing the 250 West Supercross series. There is no doubt that 2014 was an exploratory year for both Bud Racing and Valentin Teillet. As with most French riders Valentin had some European Supercross experience, but he would soon find out that the scale of Supercross in America dwarfs the typical European Supercross. Valentin and the Bud Racing crew are on a learn-as-you-go program, but they are having a great time along the way. Having to adapt to the faster pace and bigger rhythms of the American riders, Valentin had to hit obstacles faster and harder than ever before which led his team to make engine and suspension changes on a weekly basis through the 2014 AMA 250 West Supercross series. SQUEEZING INTO THE SADDLE

As we prepared to test Bud’s KX250F the first thing the MXA wrecking crew noticed was how small Teillet’s cockpit was. The Neken handlebars had a very low bend and were rolled back. With its carbon fiber body parts and titanium bolts, the Bud Racing KX250F was pushing close to the AMA’s 212-pound weight limit. The weight felt as if there was a 125 two-stroke between our legs. One of the reasons that Valentin wanted to come to the USA to race was that the AMA doesn’t have a 23-year-old rule—and in Valentin’s case this is important. Weighing only 135 pounds, if Valentin stayed in Europe he would have to move to the 450 class. For the MXA wrecking crew Valentin’s weight played an important part in our testing his Bud Racing KX250F—because we don’t have any 135 pound test riders. 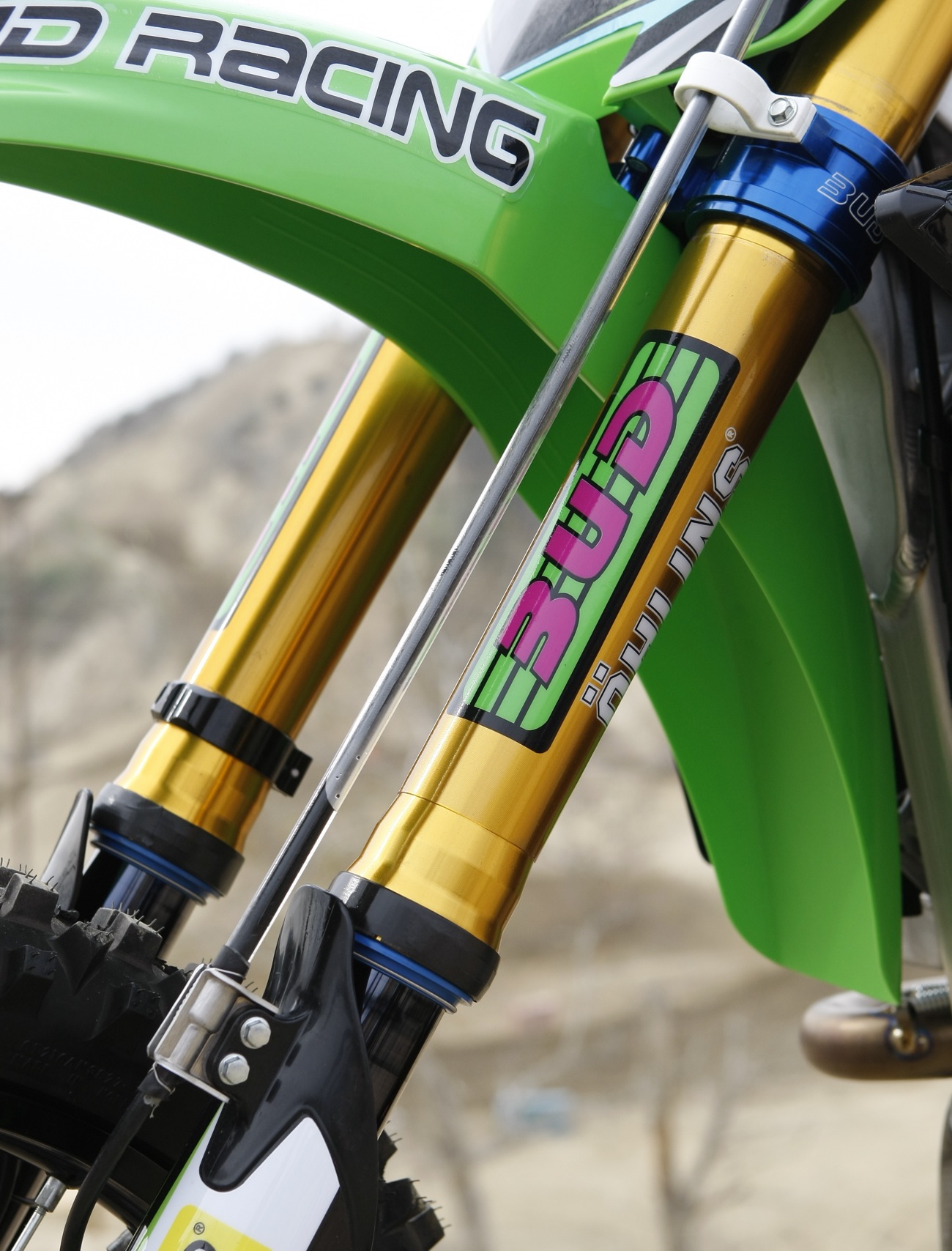 We figured that Bud Racing’s Ohlins suspension would be too soft for MXA’s bigger test riders, so we were hesitant at first. We were afraid of shattering the bottoming cones over the first big Supercross jump. Surprise! The Ohlins setup was resilient. It was plush over the chatter and then got progressively stiffer as it move deep into its travel. In fact, we never blew through the fork’s stroke. All of the MXA test riders gave the Bud Racing Ohlin’s setup two thumbs up. It left us feeling confident in the bike’s abilities. Bud Racing’s rear holeshotlink pulls the rear of the bike down 100mm for the start.

The power plant was done in-house by Bud Racing. After the first few laps we felt as if the clutch was slipping. We asked the Bud Racing mechanic how much time was on the clutch and he said just one short practice session. We had Bud pull the clutch down and, sure enough, the plates were fried. That is when they told us that Valentin has a reputation for abusing his the clutch when entering the whoops as he tries to learn how to skim them a gear taller. With fresh plates installed we got back on the track. The engine’s characteristics felt similar to an outdoor setup. It had very little bottom and not much hit, but as the rpm climbed the power gates opened up. Bud Racing’s engine revved to the moon and back. Learning to ride this bike on a Supercross track was difficult at first, but it really taught our riders to carry speed throughout the track and stay off the brakes. We think that over time (and by the start of the 2015 season for sure), Bud Racing and Valentin will move the power down into the midrange to help the KX250F get on the pipe sooner in the tight confines of a Supercross track—and save the high rpm rocketship for the outdoor Nationals. (Valentin will split his time between the 250 West Supercross series, French Elite Championship, a couple 450 GP’s  and selected AMA Nationals — most notably Glen Helen). So what was the MXA wrecking crew’s consensus? Bud Racing is on the right track. They have the right formula of passion, talent, work ethic and machinery. With each race Valentin got better in the whoops and we expect that in 2015 he will be running near the front. As for Bud Racing, the have opened a race shop in Lake Elsinore, in Grant Langston’s old shop, and plan to use it as a base for their import business, as a race shop for their race team and as a home base to bring more young French riders to America to learn under the guidance of Bud’s riding coach Jacky Vimond. Welcome to America.

YOU ARE THERE (DIGITALLY): RED BUD NATIONAL TRACK MAP