The Maxxis ACU British Motocross Championship will lift the restriction on 250cc two-Strokes competing in the Maxxis MX2 class from 2020 onwards. The new rule will allow 120cc to 250cc for two-stroke engines and 175cc to 250cc four-stroke engines. The ACU Motocross Committee feels that with the increased costs of four-stroke machines it is imperative to keep the sport affordable for all. ACU Motocross Chairman and Maxxis Championship Race Director Steve McCauley said “We feel the time is right to allow this…into the main British Championship. We firmly believe that we must try new ideas and progress the sport wherever possible we also believe that by making and announcing our decisions a long time in advance it gives everyone fair notice to plan accordingly.” Monster Energy Yamaha Factory Racing Team’s Aaron Plessinger returns to action this weekend to make his debut in the Lucas Oil Pro Motocross Championship 450MX at The Wick 338 in Southwick, Massachusetts on Saturday, June 29. The 2018 250MX National Champion spent months working to recover from his broken right heel injured at the Daytona Supercross. Plessinger has been able to put time on his Yamaha YZ450F, riding and training in Florida and is eager to join his teammates Justin Barcia and Dean Ferris at the sixth round of the championship.

Aaron said: “I’m super excited to get back to racing. It’s been about four months now since I got hurt. I don’t think I’ve taken that much time off a dirt bike in a long, long time, so it’s been about the longest four months of my life. I’ve been back on a bike now for probably five weeks and I’m feeling really good. Yamaha came out before the Florida National and I was able to get some really good testing in. I’m really happy with my bike right now. Heading to Southwick, my expectations… I really want to get a good start and run with the top guys. I’ve been practicing my starts this week. I’m ready to do some work and looking forward to seeing everybody again.” Tommy Searle will join the Monster Energy Kawasaki Racing Team for the remainder of the FIM MXGP Motocross World Championship in the wake of injuries to both factory riders. With a dramatic series of injuries to ClEment Desalle, Evgeny Bobryshev, Alessandro Lupino and, last weekend, to Julien Lieber who crashed hard while putting in his best-ever performance in the premier MXGP class. The BOS GP team has agreed to let Tommy Searle move from their team to the Factory Kawasaki rig for the upcoming GPs, although not starting until the the Czech Republic at the end of July. Currently leader of the British championship, Tommy will race the remainder of the series on the same BOS Kawasaki he has been racing since the beginning of the season in the UK.

Tommy Searle: “I’m obviously very happy to have this opportunity to ride for the Monster Energy Kawasaki Racing Team and I want to thank everyone involved for their support. I will work hard with them in the coming weeks to be ready and prepared for the Czech GP, and will also do my best in the British series to claimed this title for Kawasaki and BOS who gave me this opportunity this season.”

Take all TV schedules with a grain of salt. Check your local listings before planning to watch anything on NBC-SN.

FREDRIK NOREN TO FILL IN FOR JUSTIN HILL AT SOUTHWICK Fredrick Noren gets called up, but this time it is to Suzuki not Honda.

Fredrik Noren will be making his debut with the JGRMX/Yoshimura/Suzuki Factory Racing Team this weekend at the Southwick National for round six of the 2019 Lucas Oil Pro Motocross Championship. New to the RM-Z, Noren is set to contest the remainder of the Nationals on a Suzuki RM-Z450 while Justin Hill recovers from shoulder surgery. Kyle Chisholm, who rode the High Point and WW Ranch Nationals as a race by race fill-in for Hill, will continue to ride an RM-Z450 with support from H.E.P Motorsports and Suzuki.

“Fast Freddie” has proven to be a serious threat during the opening rounds of the 450 National series, despite the challenge of driving around the country as a privateer. The 27-year-old from Sweden has finished inside the top-ten on multiple occasions and has been on the cusp of a breakout ride. As part of the JGRMX/Yoshimura/Suzuki Factory Racing Team, Noren will have race and team support as well as a forceful Suzuki RM-Z450 to compete with. He is determined to continue the momentum and success he’s had, and bring fresh talent to the team.

“I’m really thankful and excited to race for the JGRMX/Yoshimura/Suzuki Factory Racing Team this summer,” said Noren. “The bike and program is a great fit for me and I’m looking forward to getting excellent results together. This opportunity lifts the weight off my shoulders after racing the opening five rounds as a privateer. It is a huge blessing and the timing couldn’t be more perfect.”

SOUTHWICK WEATHER FOR THE WEEKEND WHO’S WHO IN AMA NATIONAL POINTS HEADING TO SOUTHWICK ON SATURDAY? Jason Anderson (21) and ZaCh Osborne are lurking in the 450 points shadows, but either one has pulled off a big win in the 450 class. 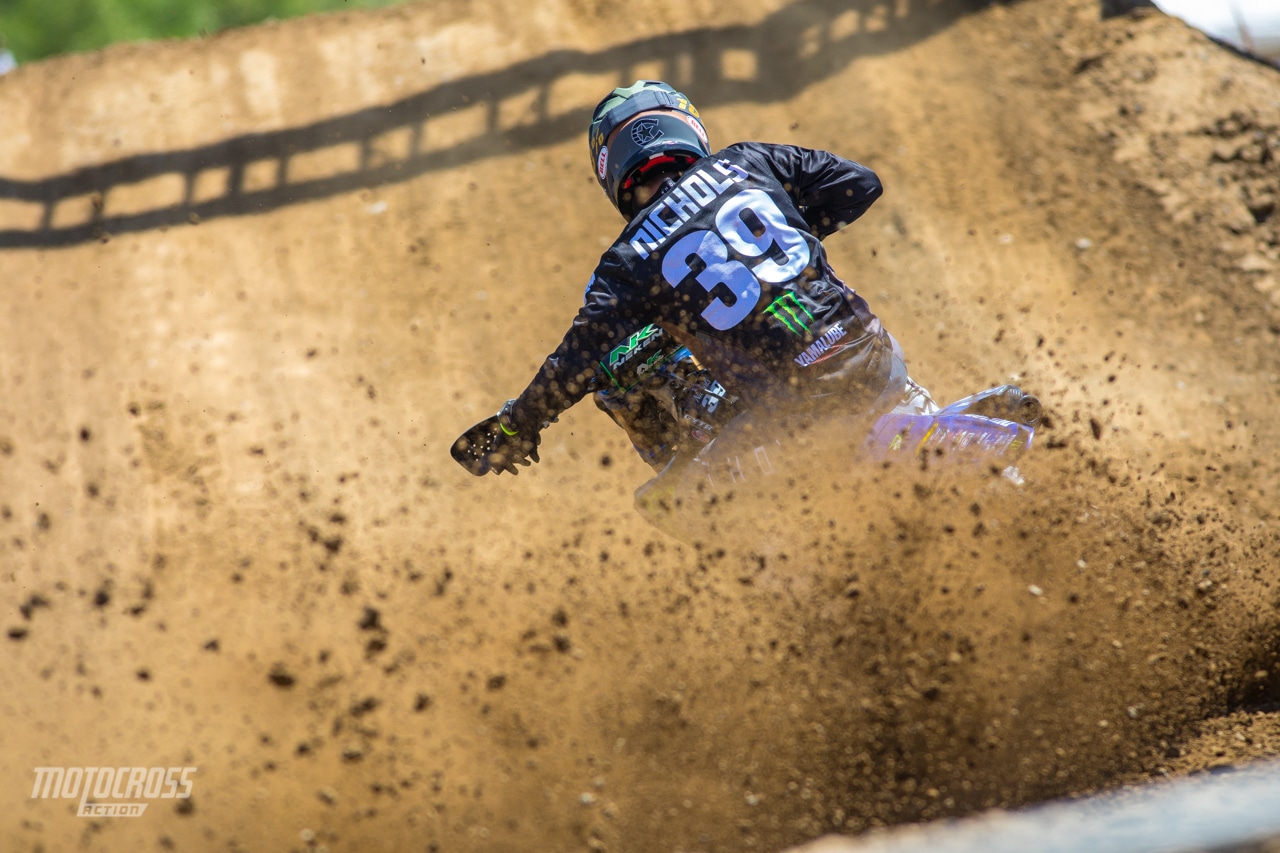 It’s much tougher to be on a four-man team than a two-man team. It makes it that much harder to win the “Best in the Truck Award.” Colt Nichols (39) has tough teammates.

DA WINNA’S! WHO’S NEXT TO TAKE AN AMA NATIONAL VICTORY For more info go to www.mammothmotocross.com

NEXT OLD SCHOOL SCRAMBLES AT GLEN HELEN ON SUNDAY For more information go to www.hodakadays.org

GREAT PLAINS VINTAGE SERIES ON THIS WEEKEND AT PLEASANTON The six-race Great Plains Vintage motocross series moves to Pleasanton in Kearny on June 30. For more info go to www.greatplainsvintagemx.org.

AHRMA “SALUTE TO VETERANS” RACE THIS WEEKEND AT SADDLEBACK EAST For more information go to www.amavintagemotorcycledays.com