Does this look fun to you? If you answered “Yes,” then you’re either certifiably insane or you are a glutton for punishment. This rider experiences the thrills of racing the Glen Helen Last Dog Standing.

The saying goes “Motocross exists because football players need heroes, too.” What heroes do motocross riders have? It depends whom you ask, but a fair number would probably point to Endurocross racers. About this time every year Glen Helen hosts one of its most grueling races, the Last Dog Standing. With the last seven days being devoted to production of the September 2016 issue, we didn’t have much time to go out and breathe in the sweet smell of motorcycle exhaust. As for the big motocross races this weekend, quite a few MXA riders migrated to Mammoth for their annual vacation at over 8000 feet above sea level. We had Brian Converse and Scott Mallonee–two freelance MXA photogs–shooting the High Point National. I decided it was a good chance to go to Glen Helen and watch the torture-fest known as the Last Dog Standing. Imagine a race where only three riders out of 120 starters actually finish race. The format has three races with two laps. Each moto is progressively harder than the last one. Logs, cement cauldrons, giant tires and cement freeway dividers are among the obstacles featured. How about a hillclimb? A seesaw? A tunnel full of hanging tires? The stuff found here is more unnatural than the perfectly manicured three-foot whoops in Supercross. Rockstar Energy Husqvarna’s offroad ace, Colton Haaker, goes through the tunnel of tires. Unfortunately, his brakes locked up, forcing him to forfeit the race. By the way, Haaker is no slouch in motocross. Arizonian Mitch Carvolth pins it over the jersey barriers. This spot was a bottleneck. 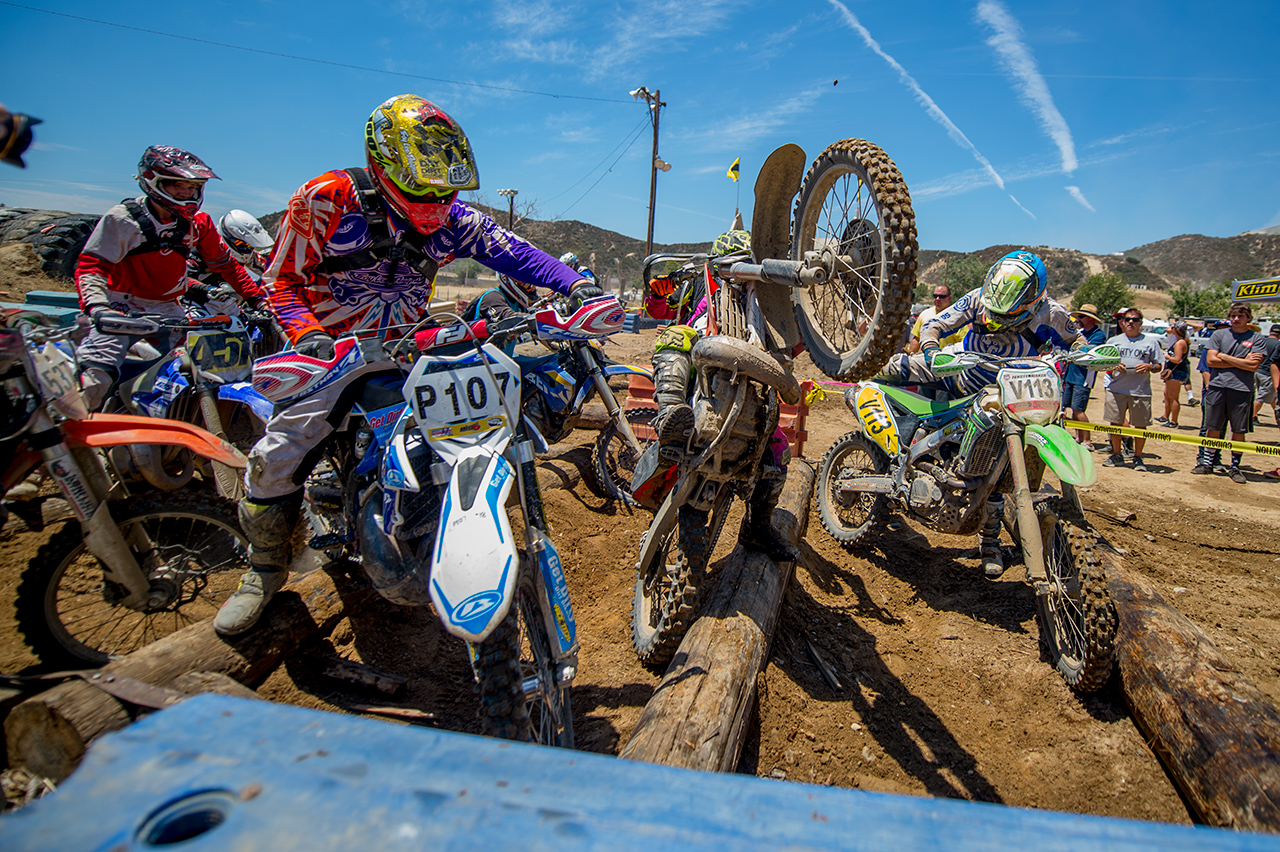 Logs started to cause havoc after the first few riders got caught up. Look at that fun! A few riders tried sending it up the hillclimb behind the REM track. This race can break a rider’s spirit. There isn’t an easy way to go ascent Mt. St. Helens, but it’s infinitely more difficult scaling up the offroad side. Garett Carlson was the only non-Pro to complete the course, making him the Last Dog Standing. From left: Cory Graffunder, Cody Webb and Kyle Redmond celebrate on the podium. Cody’s trophy weighed over 50 pounds according to designer Spencer Bloomer. Spencer is the R&D tech for JGRMX and welded together used parts from the Justin Barcia, Weston Peick and Phil Nicoletti’s bikes to make these sick trophies. THE TRUCKS OF THE TEAMS Set up at Hangtown.

The rig is a vital part of the team. During the races it becomes the temporary home of most the racers and the support crew. It masquerades as the face of the team to the fans, and stores the bikes on the road. Like the bikes and riders, the rigs are designed to be a flashy representation of each team. Let’s see some of the more popular ones. Ryan Dungey was the AMA 450 National Champion last year. As everyone knows, Dungey is no stranger to winning. He won the outdoor crown in 2010 and 2012. Entering Hangtown, Dungey seemed to be riding at a more measured pace than he had exhibited in the last few rounds of the Supercross championship. Dungey’s comfort zone is at a much higher pace than most riders pushing their boundaries. After a solid second place at Hangtown and a win at Glen Helen, the Minnesota native seemed to be on track to challenging for the title. Thunder Valley is where all of that changed. While Ryan Dungey would go 4-4 and take second overall, a crash in the second moto resulted in a season-ending injury. While nothing was suspect at the race, an increasingly stiff neck forced Dungey to see a specialist in the proceeding days after Thunder Valley. It was discovered he had a fractured vertebrae. With 6-8 weeks healing time, Dungey will not be able to contest for the overall. Below are his 2015 stats. $39.95 would get you the Fastback jersey that Jeff Emig wore in 1999. At the time of this ad Emig was recovering from breaking both arms. Two months later he retired after garnering another injury while he was preparing for the 2000 National season. Gavin Slavens is a member of Team Green. Currently he rides in the supermini class. The story isn’t always where the buzz is at. Part of photographing any event is following multiple storylines and hoping to get a good photo of each. Every rider has a story. Ken Roczen, Ryan Dungey, Eli Tomac, Trey Canard and Cole Seely all made the podium at Thunder Valley, whether it was for a moto or the overall. Each rider had a different story. Tomac tried to meet his 2015 expectations and satisfy the home crowd. Ken Roczen was the dominant rider, and Cole Seely was finally breaking into the top five. In photographing these events you have to follow each storyline carefully. That means peaking behind the curtain or bouncing between multiple hotspots. Keep your eyes open, because you don’t know where the next photo is.