The Over-30 Pro class sweeps around Talladega wide open in fifth gear. If you take the time to downshift, you’ll lose five places. There were 475 riders at the World Vet on Saturday and over 500 on Sunday. Photo: Dan Alamangos 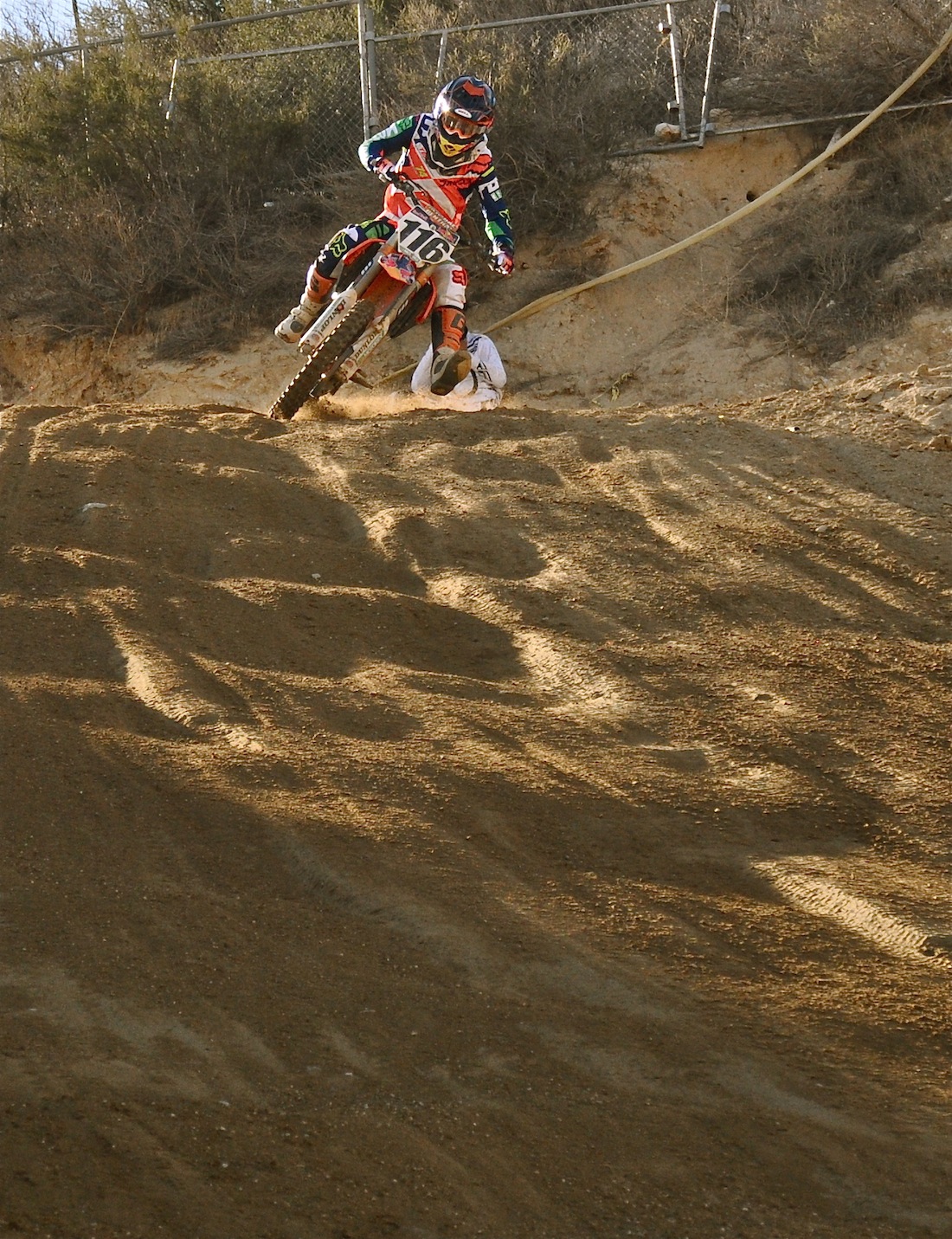 Glen Helen is definitely not smooth as glass. Ryan Morais looks for the smooth line, but doesn’t find it. Photo Mark Chilson With riders from 20 different countries it was obvious that many of those riders had never seen a hill. Former AMA National Champion Chuck Sun (63) isn’t among the unlucky few who failed to make the top. Photo: Mark Chilson Framed by palm trees the Shoei uphill is sub-divided into four distinct sections. This is only two of them. Photo: Mark Chilson Sean Collier brought his Kawasaki two-stroke to the World Vet, but crashed off the track while running fourth in the first moto. And, while picking up his bike, another rider crashed in the exact same spot and rammed Sean from behind. Photo: Dan Alamangos Jason Thomas went off the track and plowed into Collier. Collier remounted in last place and charged back to 6th, but elected not to race the second moto. Thomas went 10-9 for 8th overall. Photo: Dan Alamangos Kurt Nicoll won Saturday’s Over-40 Pro race—although aided by a Doug Dubach crash in moto two, the former GP rider and four-time 500 Grand Prix runner-up was the first serious competition that Dubach has seen in the Over-40 class in years. Photo: Mark Chilson Doug Dubach (15) and Kurt Nicoll met again on Sunday in the Over-50 Expert race. Dubach took the win with a 1-1, but his pass on Nicoll left the Brit fuming when they made contact. Photo: Mark Chilson Ed Foedish didn’t win any of the Pro classes, but he raced the Over-30 Pro, Over-40 Pro and Over-50 Expert classes for a full weekend. Plus, he had to borrow a bike from MXA after he blew his engine in Saturday practice. Ed went 4-4 in the Over-50 Experts behind Dubach, Nicoll and Kevin Foley. Photo: Mark Chilson Idaho’s Don Grahn (86) broke his shift lever off in the first moto of the Over-60 class, but managed to hang with first moto winner (and three-time Over-50 World Champ) Pete DeGraaf (16). Don’s first moto 2nd was backed up with a second moto win for the Over-60 World Title. Photo: Dan Alamangos Glen Helen’s World Vet track offers lots of chances to make a mistake or to capitalize on the mistakes of others. Lap times varied by class, but were in a 2:20 range on average.  With classes divided into Novice, Intermediate and Pro skill levels in 5 year increments (25, 30, 35, 40, 45, 50, 55, 60, 65, 70—plus Women’s classes) there were classes for everyone.Photo: Dan Alamangos Brazilian Roque Colman (51) swept both motos of the Over-70 World Championship. Here, Roque leads three-time World Vet Champion Lars Larsson (56). Of the 7 riders over 70-years-old, three were from the USA, two from Sweden, one from Japan and one from Brazil. These men are amazing to still be racing as hard as they do. Photo: Dan Alamangos Melbourne, Australia’s Mike Reefman drags his swingarm through a rut with the Glen Helen sign hovering in the distance. Reefman said he just hoped to make the top ten when he flew in from Australia by himself, but was elated to be 4th in the Over-40 Pro class. Photo Dan Alamangos (also an Aussie) This pack of riders isn’t near the bottom of Mt. Saint Helen yet, but it’s all brakes—no gas. Photo Mark Chilson How far do you drive to get to the races? Ever consider Barcelona, Spain, to Glen Helen, California? Spanish race Kim Sunol (52) gets a moment of glory. Photo Dan Alamangos With riders from 20 different countries Glen Helen’s big hills were a new experience for many riders. The pile-ups were common as riders over-braked on steep uphills and were shocked when their bikes stopped and fell over. Here, John Perry (25) is the only rider going in the right direction. Photo Mark Chilson Almost every track has ruts, but Glen Helen has ruts that look like craters and go straight up. Will Harper heads for the largest ravine. Photo Dan Alamangos INTERVIEW OF THE WEEK: DEAN WILSON