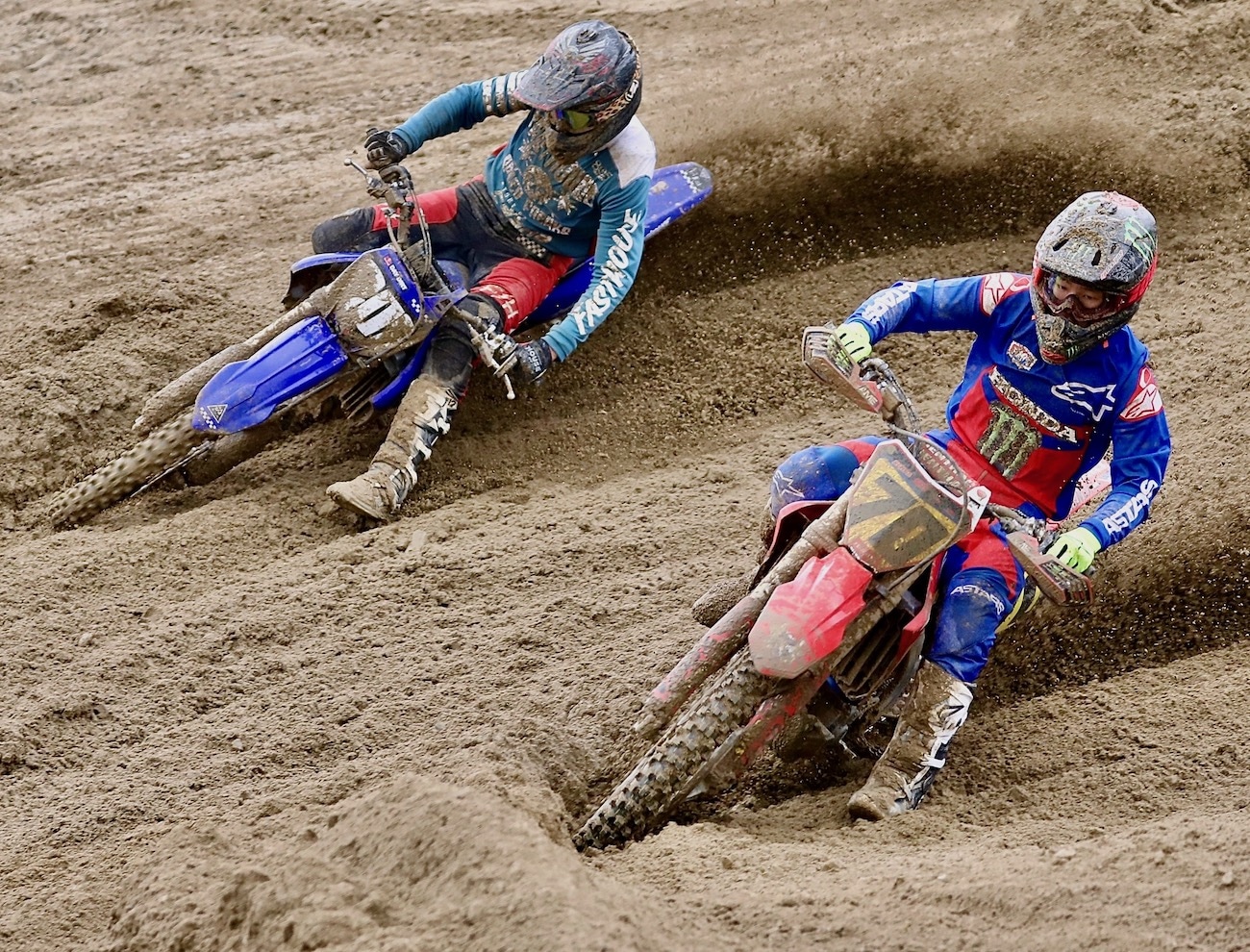 Young Shiaru Honda (70), who is in California to prepare for a future GP career, got to race at Glen Helen and see the speed of veteran Pros, like Sean Collier (207), Justin Jones, Ford Heit, Brian Medeiros and others first-hand. Photo: Debbi Tamietti

As originally planned, 16-year-old Shiaru Honda would have been training at the Dave Thorpe Honda Off-Road Centre in England with the intent of one day racing MXGP series. But, with England under strict pandemic restrictions, Shiaru instead came to California to work under the close guidance of Johnny Campbell. Johnny Campbell, for those who don’t know, he is an 11-time Baja 1000 winner and has played a large role in the development of Honda’s off-road bikes, including the XR600, XR650, CRF450X and CRF450RX. He has worked for HGA (Honda Japan) in the development of the CRF450 Rally machine and runs his own JCR/Honda off-road team. Honda has every confidence that his young son Shiaru Honda is under excellent care and tutelage with Johnny. 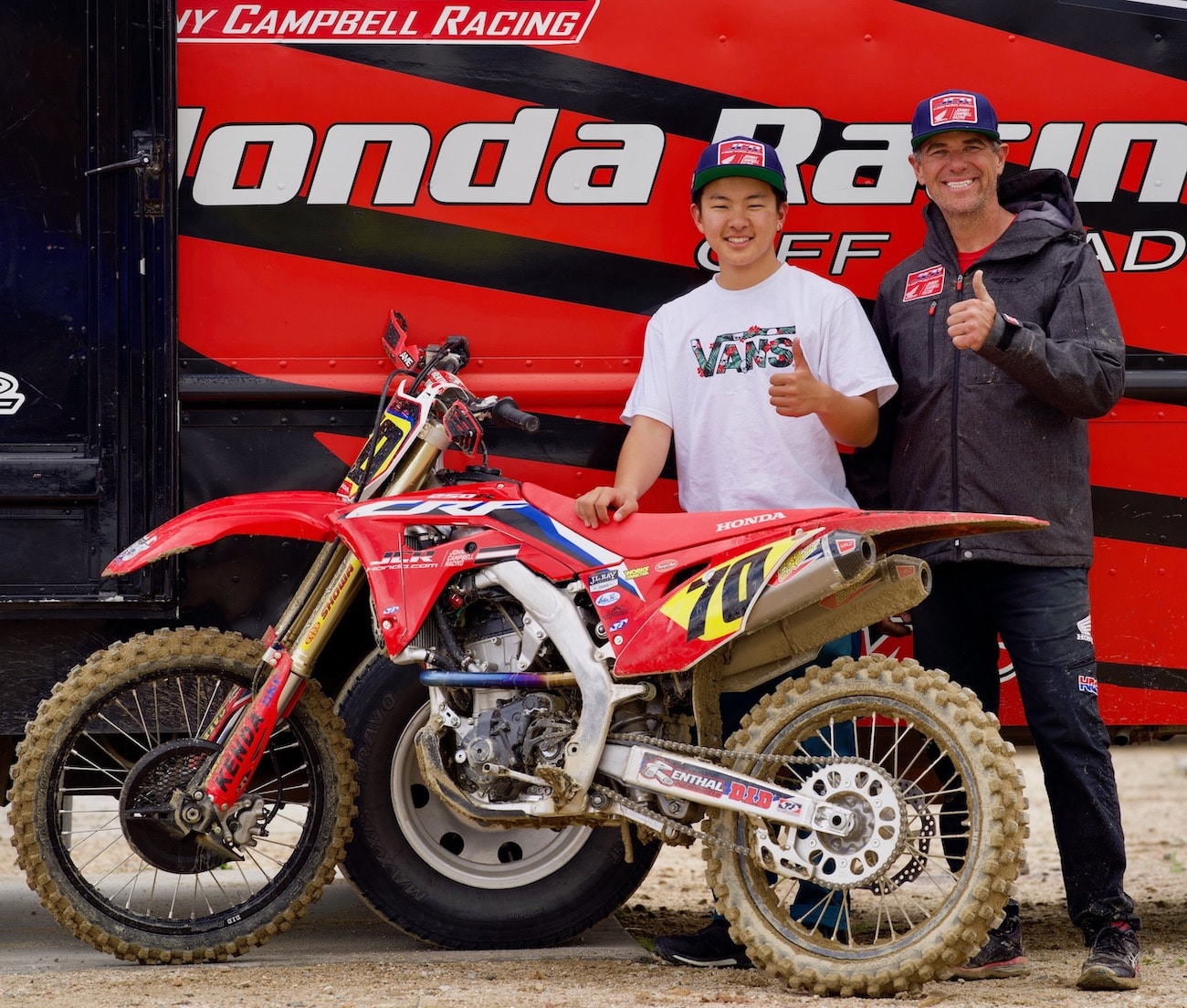 Shiaru Honda is the son of Taichi Honda (not related to Soichiro Honda), and that name rang a bell with MXA because back in 2010 MXA ran an interview with Taichi Honda, when he was a young engineer/racer involved in the development of Honda’s motocross bikes. We learned then that Taichi Honda had been a motocross racer, who raced in the All-Japan National Championship series as privateer. Taichi never got to race outside Japan. In 1995 he had to choose between trying to race seriously or becoming a test rider for Honda. He chose Honda R&D. 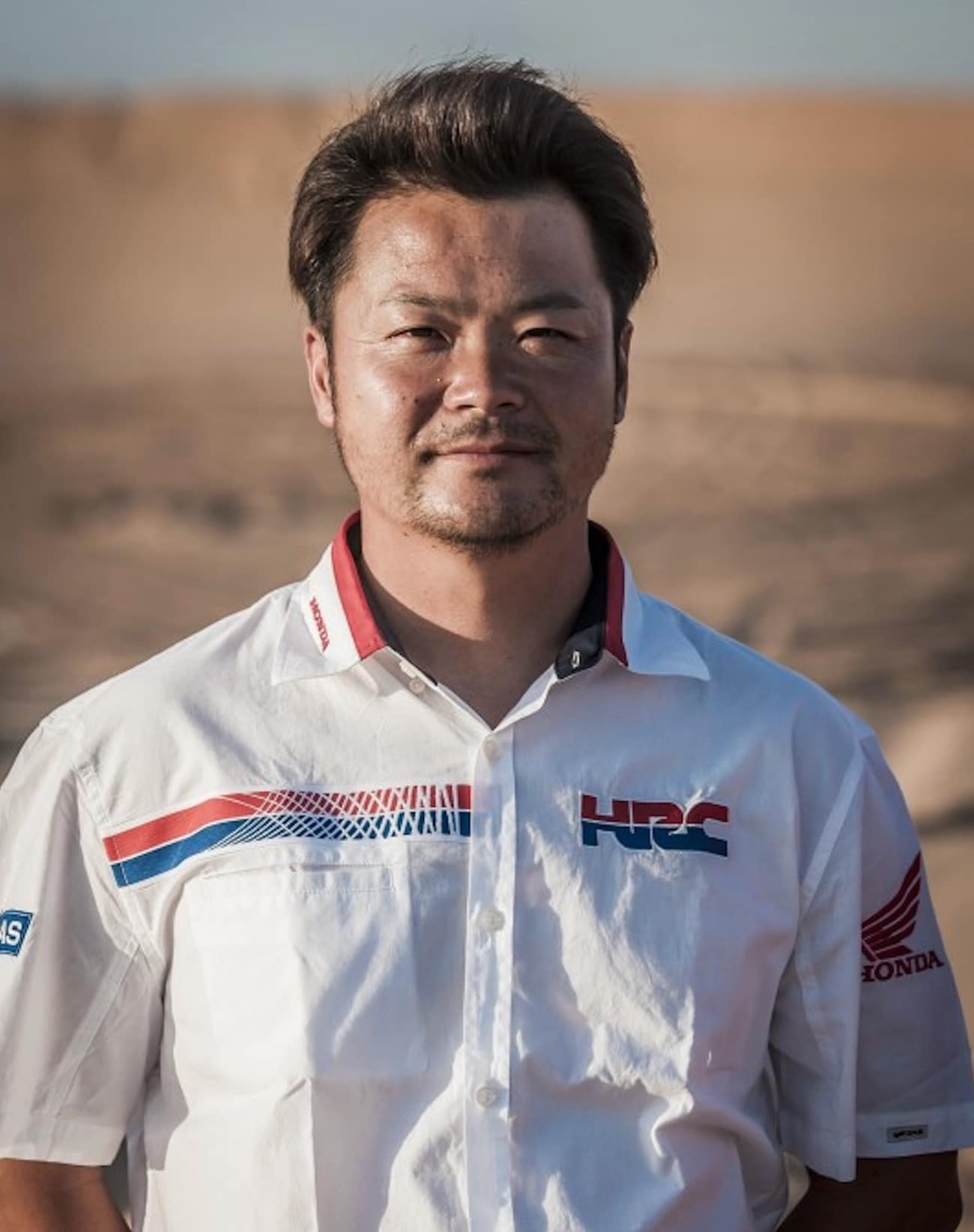 Honda Racing Corporation (HRC) head Taichi Honda (above) sent his son off to get some racing experiences outside of Japan.

At Honda, Taichi was involved in developing the steel-framed two-stroke Hondas and his biggest task was in designing the 2009 Honda CRF450. In the ensuring 11 years, Taichi Honda has risen up the corporate ladder to become the head of Honda Racing Corporation (HRC) for MXGP, AMA Pro Motocross, AMA Supercross and the Dakar Rally race programs. Of course, Taichi Honda has worked with Johnny Campbell over the years and has every confidence that his young son Shiaru is in good hands. Johnny Campbell brought Shiaru Honda to the weekly REM motocross at Glen Helen this past Saturday to get his first taste of American motocross. A light mist of rain fell in the morning, but the track managed to come around as the rider rode practice. Shiaru Honda was entered in the 250 Intermediate class, but unlike in Japan, the REM races start in waves—with the faster classes leaving at the drop of the first gate and the slower classes leaving 30 seconds later. 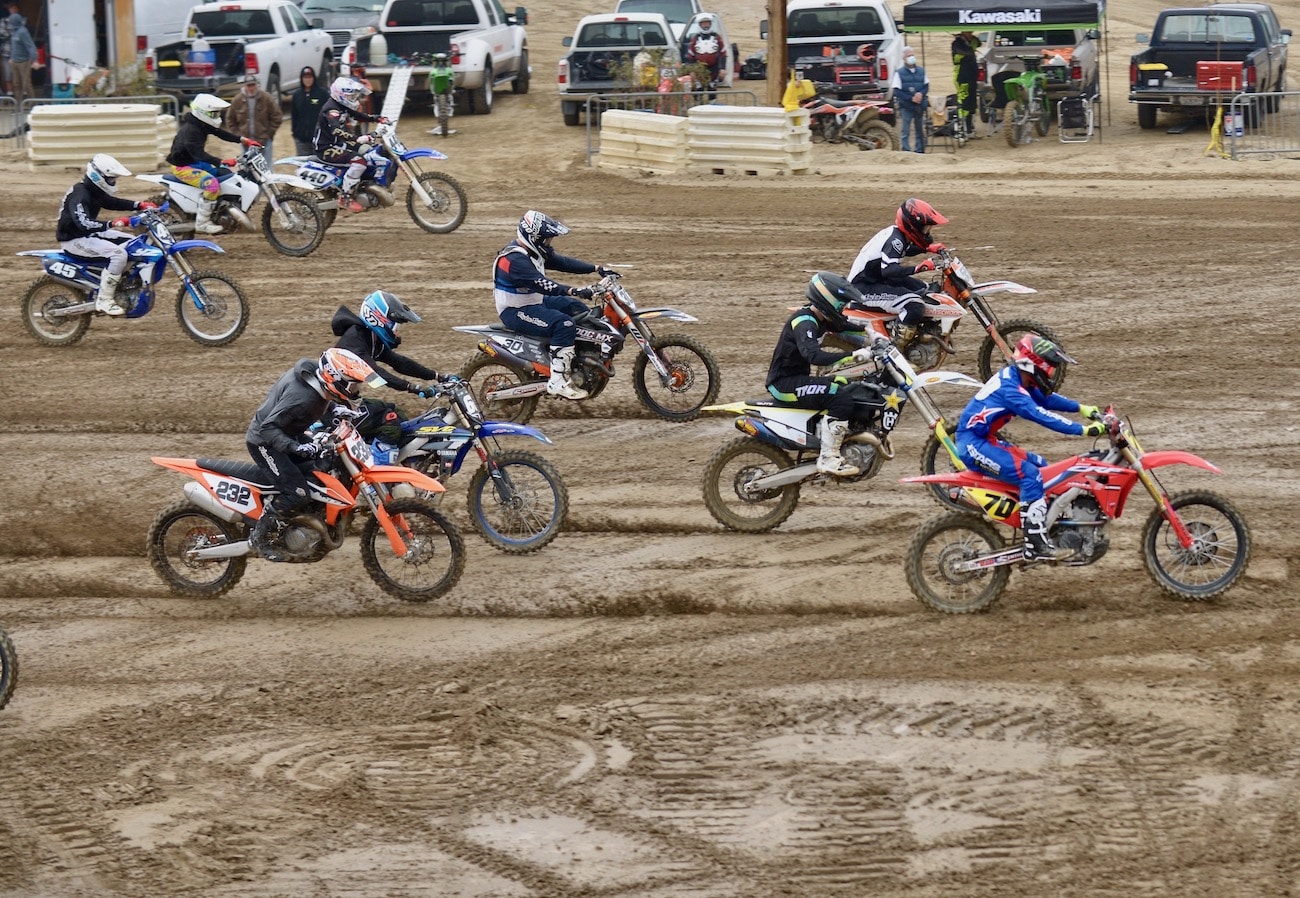 Shiaru (70) got a good jump on the second wave and is ahead of the 450 Intermediates Hayden Robinson (to his left) and Tyler Nichol (farther over), while Adam Taki (232), eventual 250 Intermediate winner Connor Styers (62) and Irish rider David O’Connor (30) give chase. Photo: Dan Alamangos 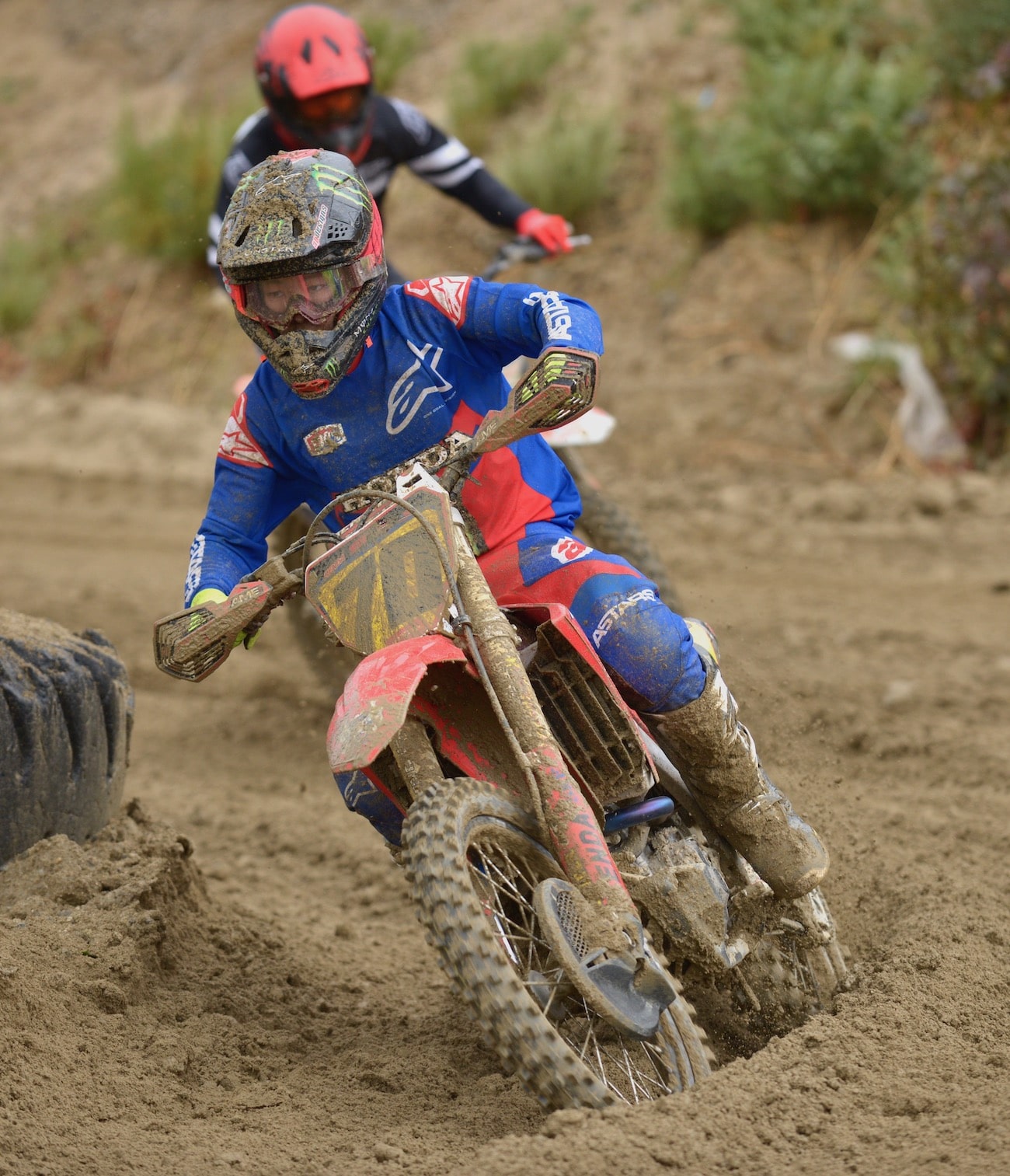 No doubt that Shiaru Honda has the very best CRF250 that HRC can build. Photo: Dan Alamangos

The fastest 250 Intermediate in Shiaru’s class was a rider named Connor Styers, who went 1-1. Shiaru went 2-2, but got to race with the other 250 Intermediates and 450 Intermediates, and of course, get a chance to see the speed of 450 Pros like Sean Collier, Ford Heit, JCP Racing-sponsored rider Justin Jones and 250 Pro winner Brian Medeiros. It was a nice opportunity to get to race at Glen Helen and avoid the lock-down in England. He will now get to experience all the other SoCal tracks, like Pala, Cahuilla Creek, Elsinore, Perris, State Fair and others. Welcome to America.