With most of the people that have an impact on your life, you remember when and where you first met them. And so it was with Danny “Magoo” Chandler (1959-2010), who passed away after a long battle with illnesses related to his paralysis. I remember the day we met as though it was yesterday — even though it was April 4, 1976. But even before I met Magoo, I had heard of him. Billy Grossi was always telling me stories about this wild kid back home in Northern California that rode a motorcycle like no mortal human being would ever dare. So, when the 1976 Hangtown 125 National rolled around I was anxious to see the kid in action.

I wasn’t disappointed. He was a tiny redheaded squirt, who needed a milk crate to climb aboard his bike. But, when he was on the track, lightning struck and thunder clapped. And not surprisingly, Danny spent a considerable amount of time flying off the track, running through the infield and hanging on for dear life. At the old Placerville Hangtown track the mechanics area was just outside of a sweeping right-hand turn—and when Magoo came by he often was so out of control that he went behind the assembled mechanics, most of whom were frozen in fear. 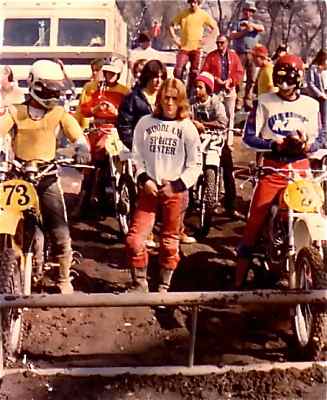 Danny as I will always remember him.

That was my first introduction to Danny. Later that day I wandered over to his pit to see if he was for real?because his riding style convinced me that he was superhuman. What a shock! He was an amazingly young kid, with a big smile and even bigger laugh. You couldn’t help but be drawn in by the contagion of all that was Magoo.

Over the years I saw Danny at every stage of his life — and he never changed. He was the “Wild Child.” I hold in the recesses of my mind images of Danny that are priceless. I can see him flying, almost paragliding, down Saddleback’s Banzai Hill on a YZ125; taking amazing creative lines at Escape Country on a RM125 during the famous grass track National; endoing his Maico repeatedly with elliptical arcs that verged on lunar orbit; the time he clipped an AMA official with his rear wheel in St. Joseph, Missouri (and jumped off his bike at full speed to go back and make sure the guy was okay); getting it altogether when he went to Team Honda; his anger that the British team manager of Kawasaki Europe would even suggest that he should move over for teammate Georges Jobe; his satisfying victory at the 1985 French GP on a KTM; his brutal crash in Paris in December of 1985 that left him in a wheelchair. I shot this photo of Magoo being loaded into the ambulance at Saddleback. It was captioned in reference to his many crashes: “Danny and his family car.”

I wasn’t in a group that believed that Magoo was the greatest racer that ever lived — instead, I thought he was the fastest rider that ever lived (and was amazed that he lived through the things he did). Magoo didn’t have a cornering style because he didn’t need one. His approach to racing was to go faster than possible down the straights, save the bike from crashing in the corners, and rocket down the next straight. When Magoo was on, this bullet train attack plan was unbeatable. No one could catch him on a fast straight and no one knew where he was going to go in the upcoming corner. Don’t even ask about jumps…the limit to how far Danny would jump was only discovered when his bike was laying on the track in a heap The next time some local racer pulls in because he got a splinter in his finger, show him this photo.

A RECORD TO BE PROUD OF

Most people point to his 1982 Trophee and Motocross des Nations performances as the highlight of his life and, to the casual fan, winning all four motos at Gaildorf and Wohlen are a feat that can never be duplicated, but not for me. Perhaps because I stayed friends with Danny after his racing career was over, I see him in a different light…not a better one, but quite different from those who only saw him ride. After Danny was injured he faced a long hard road. And it would be misleading to say that he handled it well. Things didn’t go right for Magoo in the years after his injury in Paris, but slowly he came to see that life had a bigger purpose. He started to rebuild his pride in himself (even in the face of a life that for various reasons was always on the verge of crumbling around him). It was the Danny “Magoo” Chandler of this period that I think was the true making of the man. He began to apply himself to race promoting, motocross training and safety seminars. He blossomed at the idea of helping people less fortunate than himself (and often during these times there were few people less unfortunate than Danny). We would always talk about the next step in advancing his ideas. He never gave up; even when he took wrong steps he persevered. He made a difference.

I called Danny once a month throughout his life to see what he was up to and to see if I could help. He was sometimes beaten down by the travails of life, but he was never downtrodden. He was always on the move, and it wasn’t unusual for me to have to make about five or six calls to find out where he was, get a new phone number and track him down. His friends were very protective, caring and concerned. They always patched me through.

Today, as I look back on the life of Danny Chandler, I don’t miss him. I will never miss Magoo because I have a highlight reel running through my mind even as I write these words. No one who saw Magoo could ever forget him. He was special and, to me, he will always be that 16-year-old kid that I first met at Hangtown so many years ago.

It is bittersweet that on the day that Danny Chandler died his all-new Sprinter van design was released. After a year of fund raising, the Danny “Magoo” Chandler Van Fund project was finally on its way to completion. I want to thank every person that contributed in the name of Danny — because in light of Danny’s passing those generous people, of whom I am proud to count myself and MXA, will always be able to say that we cared about the man…not just when he was on top, but when it mattered.

Danny would certainly want everyone to know how grateful he felt. Danny was proud of the charitable contributions that his friends and fans made in his name…he felt loved. He didn’t know the half of it.

For more info an Danny Chandler go to www.dannymagoo.com