Leatt has a store in Whistler for the summer season. You can see how excited Leatt’s very own Steph Slattery is about it. Just take a look behind the glass.

When Leatt invited me up to Whistler, British Columbia, for one of the biggest downhill mountain bike events in the world, also known as Crankworks, for their 2017 product launch I was a bit confused. No motocross track? No dirt bikes? What was I to do? The itinerary called for some downhill mountain bike riding and a VIP pass for the Crankworks event. I decided to go along for the ride…literally? 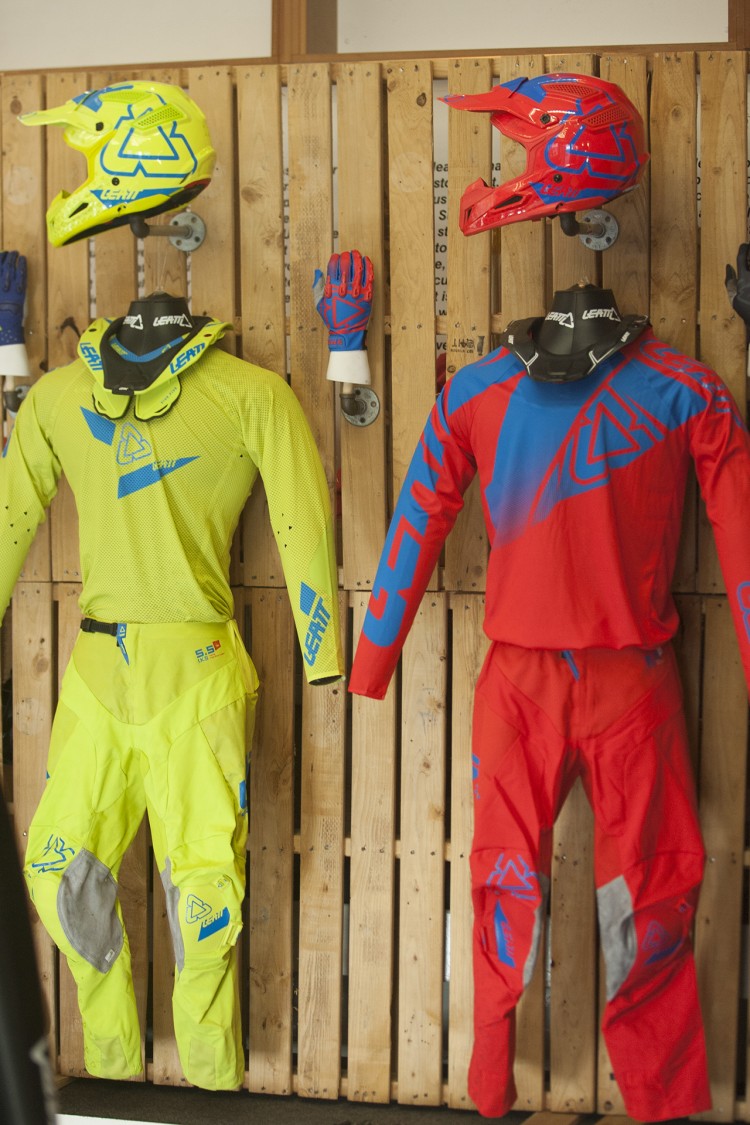 Leatt will have three different lines of moto gear in their 2017 line. Their high end 5.5 line offers flexibility, comfort and durability. Look for a full review in the magazine in the next few months.

I had a feeling that Leatt was going be unveiling something big, but had no clue what I was getting into until walking into the hotel room. There were mannequins wearing all-new Leatt gear. Just behind the mannequins was a full setup of downhill mountain bike gear–everything from the helmet, neck brace, body armor to the elbow pads. Never having worn elbow pads or body armor and not being a big neck brace fan, I opted out of wearing them. What was the worst that could happen with two wheels and no engine? All us media guys had a tour guide on the mountain to keep us out of harm’s way. This is me before I got overly confident. Notice the visor still intact. Photo: Travis Fant

Leatt appointed a mountain bike tour guide for the day. There were hundreds of trails for us to get lost on. So, the guide took us to the summit on our first run. It was a 20-minute gondola ride to the top. The first run down took over an hour with a max heart rate of 180 beats per minute and a top speed of 39 mph. The trails were unreal. We told the guide we were ready for a tougher challenge. So he guided the way for a second run from the top. Not even 15 minutes into the run I was getting overly confident and started to chase the tour guide. We came up on a fast Esse-section, and the last thing I remember was waking up and yelling, “I’m okay!” My front wheel lost traction and I went head first over the edge into a rock pile. They said I was out for about ten seconds. My elbows, chest, face and neck were sore and cut up. The first thing I thought to myself was how dumb could I be to not wear what Leatt offered me to protect myself. I learned my lesson and so did everyone else. At the end of the run everybody went back to their rooms and strapped on everything in the Leatt goody bag that offered protection. As for myself, I was trying to remember what day it was. As you can see my visor is gone and the jersey has holes in the right arm. The crash wasn’t pretty. I was just glad to be able to make it down the mountain on my own. Photo Travis Fant.

The rest of the trip consisted of good food and watching the Red Bull Joyride event. The course had huge jumps so the riders could execute their bag of tricks. There were over 70,000 spectators that attended the event. Lucky for me, I was sipping cocktails in the VIP lounge watching. Thanks to Leatt for the awesome experience. Hopefully next time I will stay on two wheels. This is a photo of the Red Bull Joyride course from the bottom of the mountain. As you can see, one of the riders backflipping off the Red Bull bar. This was the last obstacle before the finish. This huge step down didn’t bode well for many of the riders. The dust cloud from 70,000 spectators walking down the mountain after the event was over.