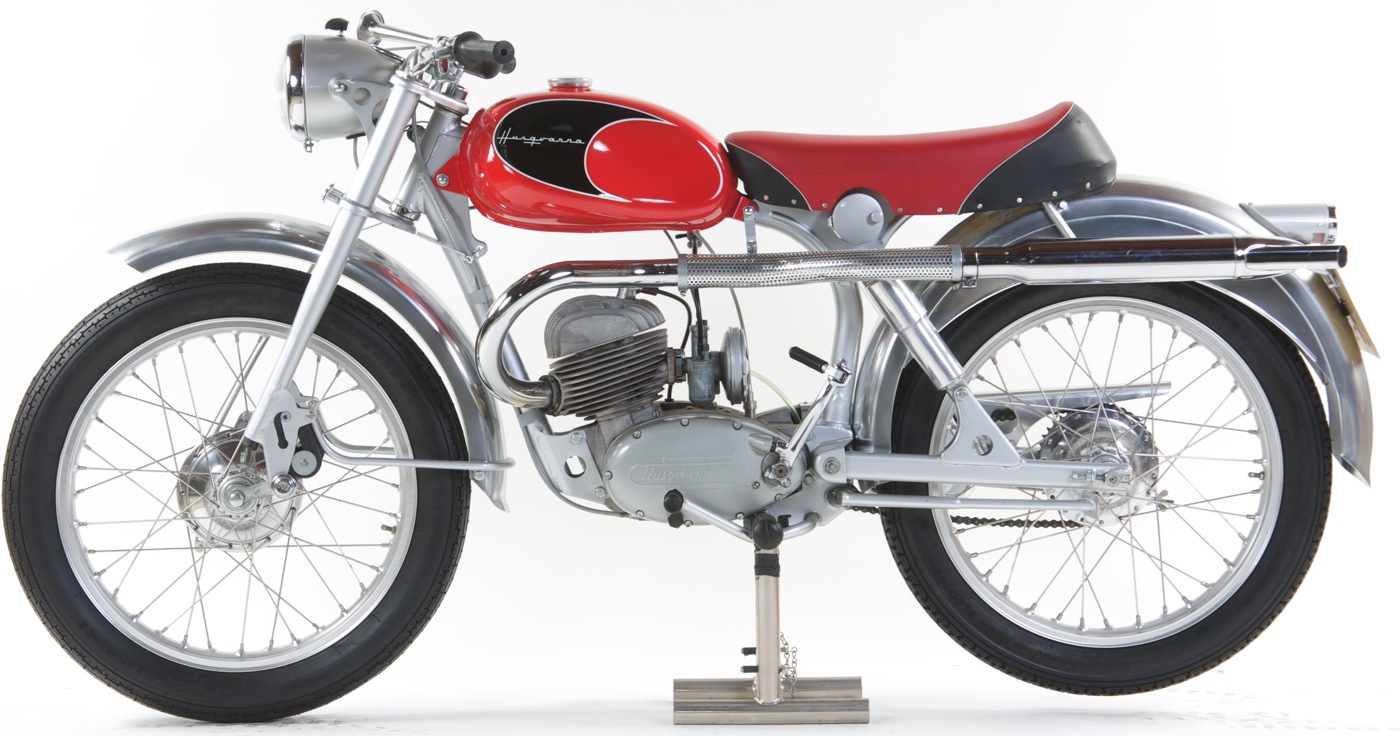 When Husqvarna introduced the 175cc Silverpilen in 1955, Swedish young men were drawn to this lightweight and racy-looking machine (much as American teenagers were draw to the affordable Hodaka Ace 100 a decade later). The black and red paint job, along with the generous use of lightweight alloy components, was a good base, and soon a healthy aftermarket for accessories developed. The 9.5 horsepower machine was the perfect starting point for many aspiring tuners. Gote Lindstrom was one of the young tuners who developed a reputation for his “hot rod” parts for the Silverpilen (Silver Arrow). By 1959, Lindstrom had developed a 250cc cylinder, high-compression head, modified crank, larger 32mm Bing carburetor and expansion chamber exhaust. Another Swede, Gustav Flink, built intake manifolds, cylinders and heads, but took it a step further by building a 250cc engine that would bolt into the stock Silverpilen chassis.

In time, both Lindstrom and Flink would go on to manufacture their own motorcycles — similar in many ways to the Silverpilen, but with four-speed transmissions (instead of the three-speed), 250cc engines, double cradle frames, and improved forks and shocks. Future World Champions Torsten Hallman and Rolf Tibblin started their racing careers on Silverpilens.

Our featured 1960 MC282E Silverpilen had been revised over earlier production models with a new-style gas tank and seat cover for a racier look. The Silverpilen was made as light as it could be by using alloy pieces where possible. Production of the Silverpilen lasted until 1965 when it was replaced by the 250 Cross.

The Silverpilen followed the 1955 Modell 31 Sport that featured a 150cc engine, steel instead of alloy fenders, and a much lower cost. The MC282 was built between 1955 and 1958, and it was replaced by the MC282E Silverpilen. A 200cc model was also made in 1960 called the Guldpilen and translated as the “Golden Arrow!” Silverpilens are beautiful, racy-looking bikes. Collectors should look for the red and black sculptured fuel tank and attractive red/black upholstery on the seat. The hand-formed alloy fenders are works of art, and other alloy items like the chain guard, exhaust heat shield and horn are very difficult to find. The forward, cantilevered shock design was a good ten years ahead of the development curve.

When new, the 1960 Husqvarna Silverpilen sold for around 6000 Swedish Crown. This was a lot of money in 1960 currency. The Silverpilen was never imported to America, thus they are rarely found on the vintage collectors’ market in the USA. In Sweden, a nice example sells today for about $4000 (30,000 Crown).

CRASHES & TAKE-OUTS, NO ONE IS SAFE // ARLINGTON…