Knowing that he had never ridden a 250 two-stroke, I recommended he give it a shot. He didn’t think much of it due to the lack of fuel injection. Somehow I managed to get him on a 2016 YZ250X that a friend of mine owned. He rode it, and bought it shortly after and loves it. I then rode the two-stroke. I grew up on two-strokes, and all my hero’s made smokers look so sweet (RC, McGrath, bubba etc) I will admit, the lack of engine braking takes getting used to for about 15-20 minutes, but then it’s all “smiles per gallon” from there.

I heard that my old 2003 Honda CR250 was ridden hard and put away wet for two years and had been sitting for another year. I called the kid and asked if he’d sell it. He text me back and said he would. I went and looked at the bike. It was beat. The pipe and silencer were destroyed. All the plastics were shot. Save for the shrouds which I desperately tried to clean up since I put the Woody Woodpecker graphics on them being the Carmichael fan that I am.

Oddly enough the seat cover was in mint condition though. More carnage was found. Bent radiator, bad chain and sprockets, rear shock was blown, levers off of who knows what, float set all bent up, rear wheel cracked and front bent. Anyway, I loved that bike and since it was my old bike from years past, I had to get it back. I told the kid all that was wrong with it and I offered him $750. He initially wanted $1500. To my surprise he was super cool and gladly sold it to me for $750. I about crapped my pants. I bought it and went to work. Rocky Mountain had my name memorized in the weeks after that. I ordered tons of stuff: Plenty to get done. But Im glad to report that with all that being said, the bike had great compression and once I got the carb to quit puking fuel out of the over flow she started first kick and ran great. What’s better is that I’m into it $2100 total. Runs great! Updated the front end to a 2016 and it’s super fun. I love two-strokes. I love four-strokes. But mostly I just love dirt bikes. We’ll see how long I can keep both my YZ450F and the CR. But it’s been fun to build it, and it’s great that I got a bike back that I thought I’d never see again. Thanks MXA for all the great articles and info. You’re the best!! I hope you enjoy my long story. I have enjoyed every second. –Brandon Bladen

Editors Note: Please keep those submissions coming. If you would like your bike to be featured in the “Two-Stroke Spotlight,” please email me at [email protected]. All I ask is that you give a breakdown of your bike and a detailed description of the build. Please also send a few photos of your steed. By submitting your bike for the “Two-Stroke Spotlight,” you agree to release all ownership rights to the images and copy to MXA. Happy submitting your smoker. I never wanted to be known as “the black kid” who raced motorcycles. I wanted to be known as a motocross racer. But, by the same token, I think if I was not African-American, I would not have gotten as much exposure as I got. When I went to a Supercross, people would cheer for me. They would come up and want my autograph. I would say, “Wait a minute, I am a nobody,” but I was different from most of the guys there. That is the only assumption I could make, because I was not the fastest guy there.

But, the fact that I was black hurt me in some respects. I found out later that I was never going to get a ride with Suzuki. It was never going to happen. At that time, the Japanese were not going to help an African-American race their motorcycles. It was racism, but I never thought that it really existed in motocross. I thought I was just like everyone else on the starting line, but obviously I was not. I never thought about being the first African-American to race a Supercross main. I just thought, “I can’t believe I made a main.” Fasthouse is a lifestyle brand based in Southern California with a focus on all things motorcycle. With multiple tiers of motocross gear, the Elrod line is the company’s high-end, athletic-fit offering. The key elements of good gear are durability, mobility and breathability; however, it’s hard to hit all three marks. The Elrod gear is both comfortable and durable.

VERDICT: The Elrod pants and jersey have an athletic fit, meaning they fit great on the body of an athlete. If that’s not you, order the gear one size up. 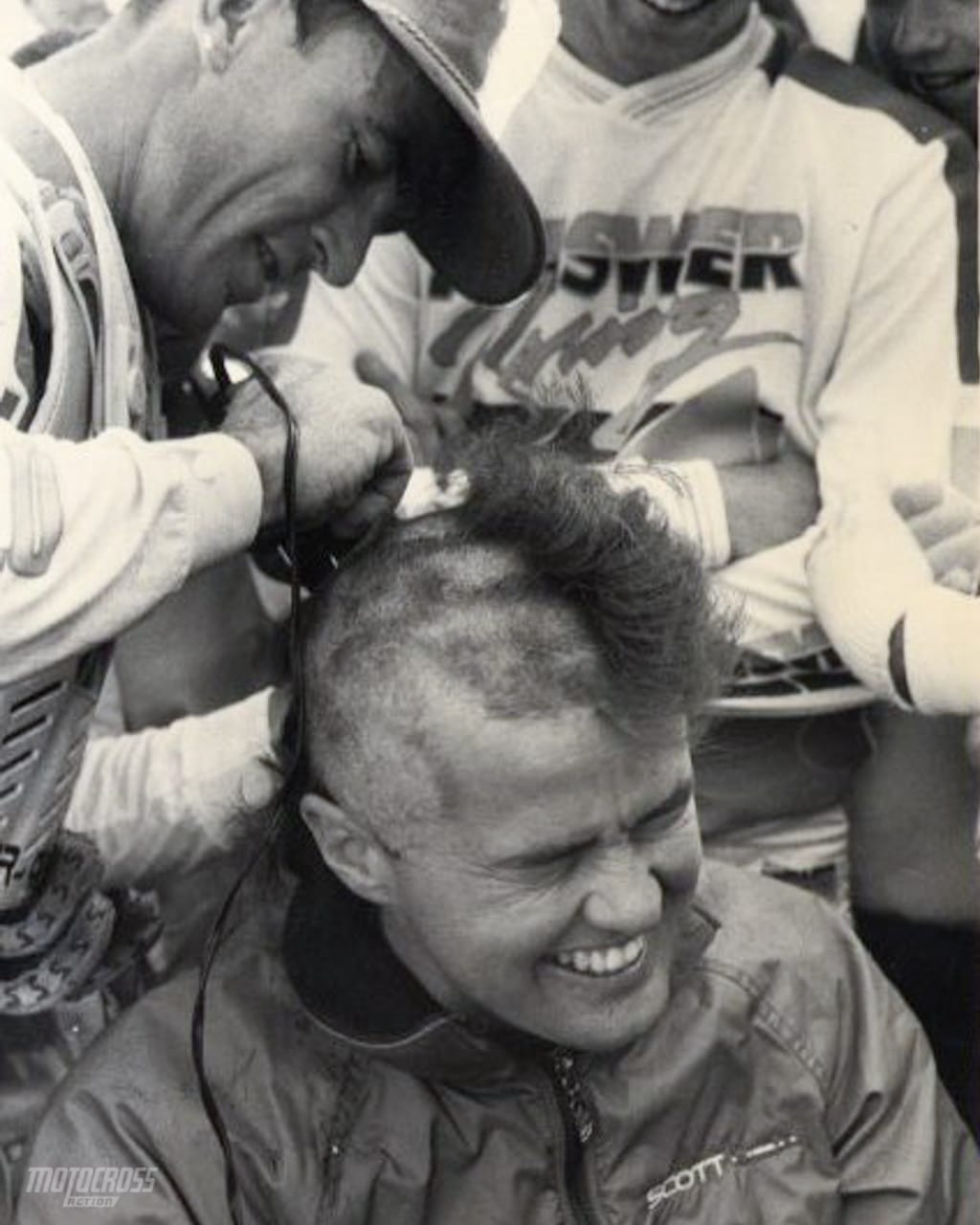 Who did Mitch Payton lose a bet to shave his head? The answer is at the bottom of the page. MOTO TIP OF THE WEEK // REMEMBER TO RECOVER MOTO TIP: Every training program must include rest days to ensure your body is not overtrained. Many young, motivated athletes believe that the more they train, the better shape they will be in. You can only train that way for so long, then your body starts to break down and your immune system weakens. Resting doesn’t mean sitting on the couch all day, though. “Active recovery” is something that helps your body flush out toxins. Thirty minutes on a bike or elliptical (at a low heart rate) is all you need. No need to break a sweat on this one. MXA‘s Jody Weisel and Lance Smail back in the late 1990s.

Moto Trivia answer: Mitch Payton lost a bet and Goat Breker got to shave his head.