Although the CR125 isn’t known for being fast, everyone in the pits stops to stare when they see a new-looking Honda CR ride by.

The best parts of this bike were the “CR125” on the gas tank and the Honda red plastic. This combination gets everyone excited. Unfortunately, I quickly learned that the CR125 is no match for today’s 125 two-strokes. Just days before I swung a leg over this CR125 project bike, I was spinning laps on the next-gen, fuel-injected, electric-starting, electric power valve-equipped 2023 Husqvarna TC125. Plus, my other recent experiences on small-bore two-strokes were on my GasGas MC150 two-stroke, which puts out 44 horsepower thanks to Mitch Payton.

The track was still soft and wet when I took this one-deuce-nickel out, and I was disappointed in the CR125 engine to say the least. I came back to the truck after my first session and took a quick tour through the Motocross Action website to remind myself about the 2005 Honda CR125, specifically to find out what the MXA wrecking crew of 17 years ago thought of this engine. Here are a few quotes that stuck out when I was reading through the CR125 tests from the past: 1999 Honda CR125: “It has no bottom whatsoever. It’s dead down low, which means that tricky track situations (off-cambers, mud, trials sections and hard-pack) have to be negotiated by coasting. Rolling the throttle on does not reward the rider with ever-increasing doses of power. The only way to get power out of the CR125 is to wick it on wide open.”

2001 Honda CR125: “The CR125 has no bottom. Slowly getting on the throttle will result in a bizarre, low-pitched exhaust note and not much else. Plan on using a lot of clutch to skip the bottom and get right into the middle if you want to go fast on a CR125. The midrange is where the CR125 shines. Not only is it broad and strong, but once the powerband surges to life, it does its best work in the midrange. The one thing that the CR125 got back for 2001 is the fabled top-end rev. Where the 2000 engine signed off, the 2001 continues to pull. At last, test riders could rev the engine to the moon rather than short-shifting it.” Syndicate Development is an engine shop in southern Idaho. The goal with this build wasn’t horsepower; it was simply to bring new life to a 17-year-old two-stroke.

2003 Honda CR125: “Honda’s R&D department reconfigured the cylinder, applied Band-Aids to the ignition, moved the powerband around and kept plugging away. For 2003, Honda was so serious about fixing the CR125 engine that they held the bike back from its traditional release date in hopes of finding the magic elixir before the final drop-dead deadline. We’re glad they took the extra time, because we can’t imagine how slow the bike would have been if they had released it on its appointed date.” 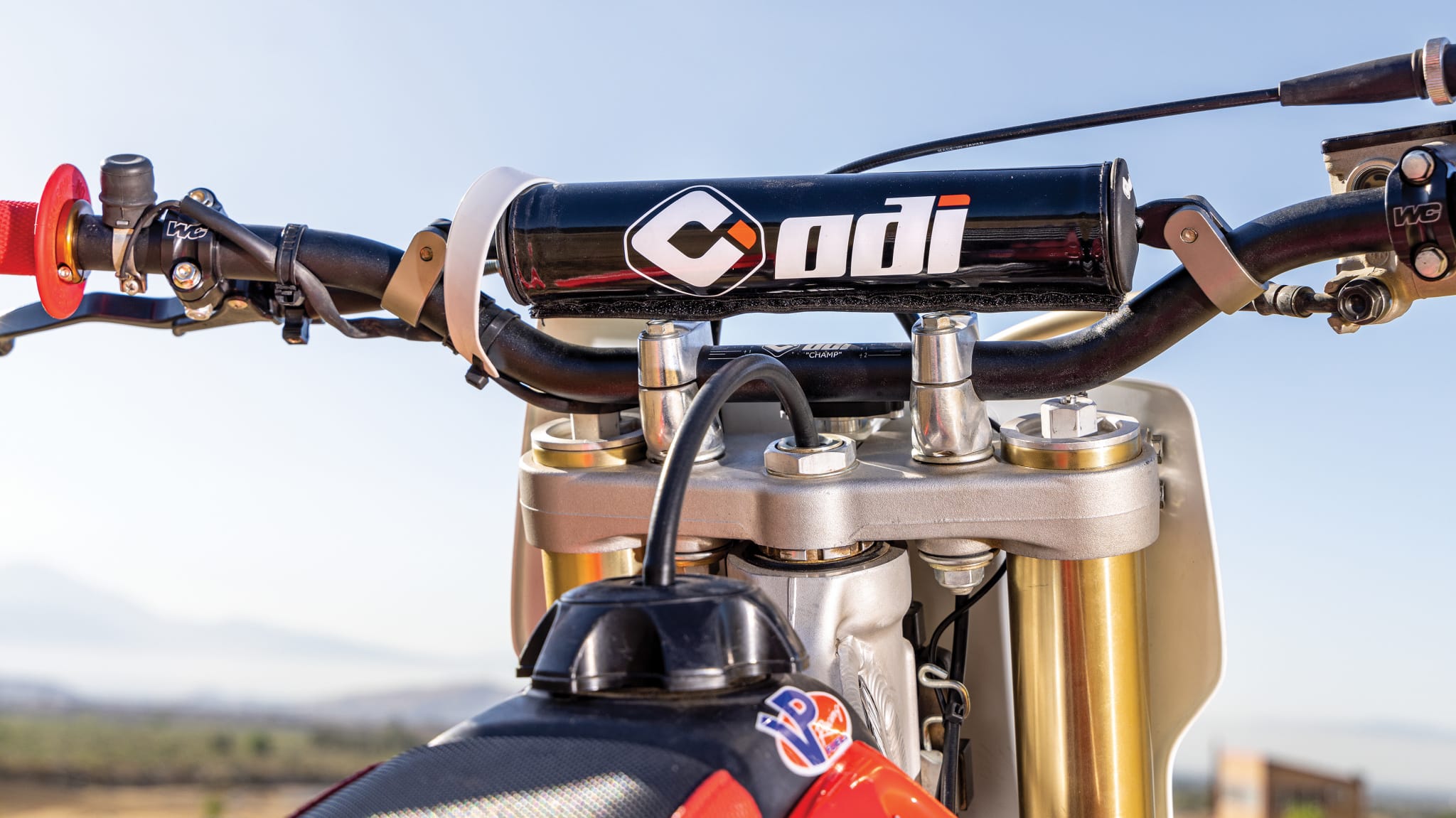 2005 Honda CR125: “Previous CR125s had a very narrow powerband (mostly in the middle). The new CR125 has lots of middle and plenty of top. The 2005 CR125 pulls strong, but you’ll have to use a little clutch to get the bike into the meat of its powerband. So, what’s the best way to ride the 2005 CR125? Use the transmission for all its worth. Honda still has a five-speed tranny (we preferred the old six-speed), but they spent lots of time working on the shift shaft, shift forks and shift drum to make shifting effortless, so use it. Slam the bike from gear to gear to take advantage of the mid-and-up powerband. You’ll work up a sweat, but the breeze you generate will cool you down.” Scar Racing’s titanium footpegs are lightweight, sharp, and they have the factory look.

WHILE READING THROUGH PAST CR125 TESTS, I GAINED SOME PERSPECTIVE ON THIS MACHINE, AND I CHUCKLED CONSTANTLY AT COMICAL COMMENTS THAT JODY AND THE MXA GANG MADE ABOUT THE PERFORMANCE OF THIS BIKE WHEN IT WAS NEW.

While reading through past Honda CR125 tests, I gained some perspective on this machine, and I chuckled constantly at comical comments that Jody and the MXA gang made about the performance of this bike when it was new. Suddenly, I was thankful that I had a 2005 model in the pits, because this bike earned much higher praise than the 2004-and-earlier bikes. With a new mindset, I suited up for round two on the CR125. After the track was more broken in and my expectations were re-adjusted, I was able to finally enjoy my time on this bike. The “CR125 Noisemaker” isn’t comparable to the 2022 KTM 125SX (with its 38.5-horsepower and 18 pound-feet of torque), but it’s great for teaching Intermediate level riders (and for reminding Pro-level riders) how to carry momentum in the corners. Without a strong bottom end, it’s difficult to recover from a mistake. A bobble that might cost a half a second on a 250F will cost you 3 to 4 full seconds on the CR. ODI’s Emig Pro V2 lock-on grips are easy to install, and they’re comfortable on the track.

Once I started thinking of the 2005 CR125 powerband as more of a game and less of a chore, I began having fun. The CR sounds extremely fast as you hold it wide open and abuse the clutch. Plus, the Race Tech-tuned KYB suspension and Honda chassis handled great, giving me more confidence to hold the throttle on as much as possible around the entire track. Thanks to Syndicate Development, JD Jetting and FMF Racing, this bike ran ultra-crisp and sounded amazing with no hiccups; however, this build wasn’t meant to be a KTM killer or Yamaha assassin, the task at hand was to simply rebuild an old CR125 to have fun ripping around farm fields in Idaho. For having fun on the farm or teaching a novice how to carry momentum and manage a two-stroke powerband, this bike is perfect. TAKE AN ANIMATED LAP OF THE AUSSIE WORLD SUPERCROSS TRACK

WANT JUNIOR TO BE A SUPERCROSS STAR? REGISTRATION IS OPEN FOR 2023 KTM JUNIOR SUPERCROSS