The premier class is ready to duke it out at High Point Raceway, located in Mt. Morris, PA. for the third round of the 2021 Pro Motocross season. Just like the 2021 Supercross season, the racing is extremely close amongst the top 10 till the checkered flag, leaving us wondering who may walk away with the overall win. The first choice is Ken Roczen as once again, he qualified the fastest and after coming off a moto sweep at Thunder Valley, we have a feeling that we may see the 94 be a top runner once again. Other top contenders like Dylan Ferrandis, Adam Cianciarulo, Aaron Plessinger, Chase Sexton, and more aren’t going to make it easy for him though. Scroll down below to see what happens when the gates drop for the 450 class at High Point Raceway. After getting a great start, Eli grabbed the lead and would disappear in first place.

The second moto commenced with a photo holeshot, being crossed by three riders but Justin Barcia was officially handed the award. Aaron Plessinger then led the race but a lap and a half later, Adam Cianciarulo took the lead. Red plate holder Ken Roczen got a poor start sitting all the way back in 14th along with Cooper Webb and Marvin Musquin. Chase Sexton and Justin Barcia drag raced through the track, side by side and eventually Chase Sexton took fifth place. At 25 minutes remaining, Eli Tomac made the pass on Aaron Plessinger for second place but still sat three seconds behind Cianciarulo. Within three laps, Ken Roczen went from 14th to fourth, passing riders such as Aaron Plessinger, Chase Sexton, Justin Barcia, and more.

Ken Roczen squeezed by Dylan Ferrandis but several turns later, Dylan took third place back. At 19 minutes remaining, Eli Tomac closed the door on his teammate Adam Cianciarulo and the two went side by side trading places in the race every other turn. The pressure put on by Eli Tomac got to Adam as Eli took the lead away and would steadily grow his lead in the race. The battle between Dylan Ferrandis and Ken Roczen was nothing short of epic.

With less than 10 minutes remaining, Dylan and Ken both caught up to Adam Cianciarulo and we would see the three duke it out once again this season. Dylan had the save of the century as a lapped rider rode into the line Dylan was heading for and the two collided. Thankfully for Dylan, he stayed on the bike and started to gain ground on Adam. The three went back and forth as both Ken and Dylan made the pass on Adam.

Eli would win the race but it was Dylan Ferrandis who would get the overall going 2-2. Adam Cianciarulo grabbed a huge holeshot with Chase Sexton and Christian Craig in second and third. Ken Roczen made the pass on Christian Craig for third place and soon the two 450 Honda teammates would be cutting it close. Christian Craig went down falling through the pack landing in 12th. With 20 minutes remaining, Aaron Plessinger made the pass for sixth place on Eli Tomac.

Dylan Ferrandis chased in fourth place with Cooper Webb in fifth and Aaron Plessinger in fifth. At 15 minutes remaining, Ken Roczen made a mistake in a turn losing ground and even a spot in the race to Dylan Ferrandis. The racers would yo-yo throughout the remainder of the race, gaining and losing ground on each other but with little success on passing attempts. With three laps remaining, Chase Sexton went down in a turn dropping down to fourth place. Adam crashed feet away from the finish line and rolled the bike across the line. 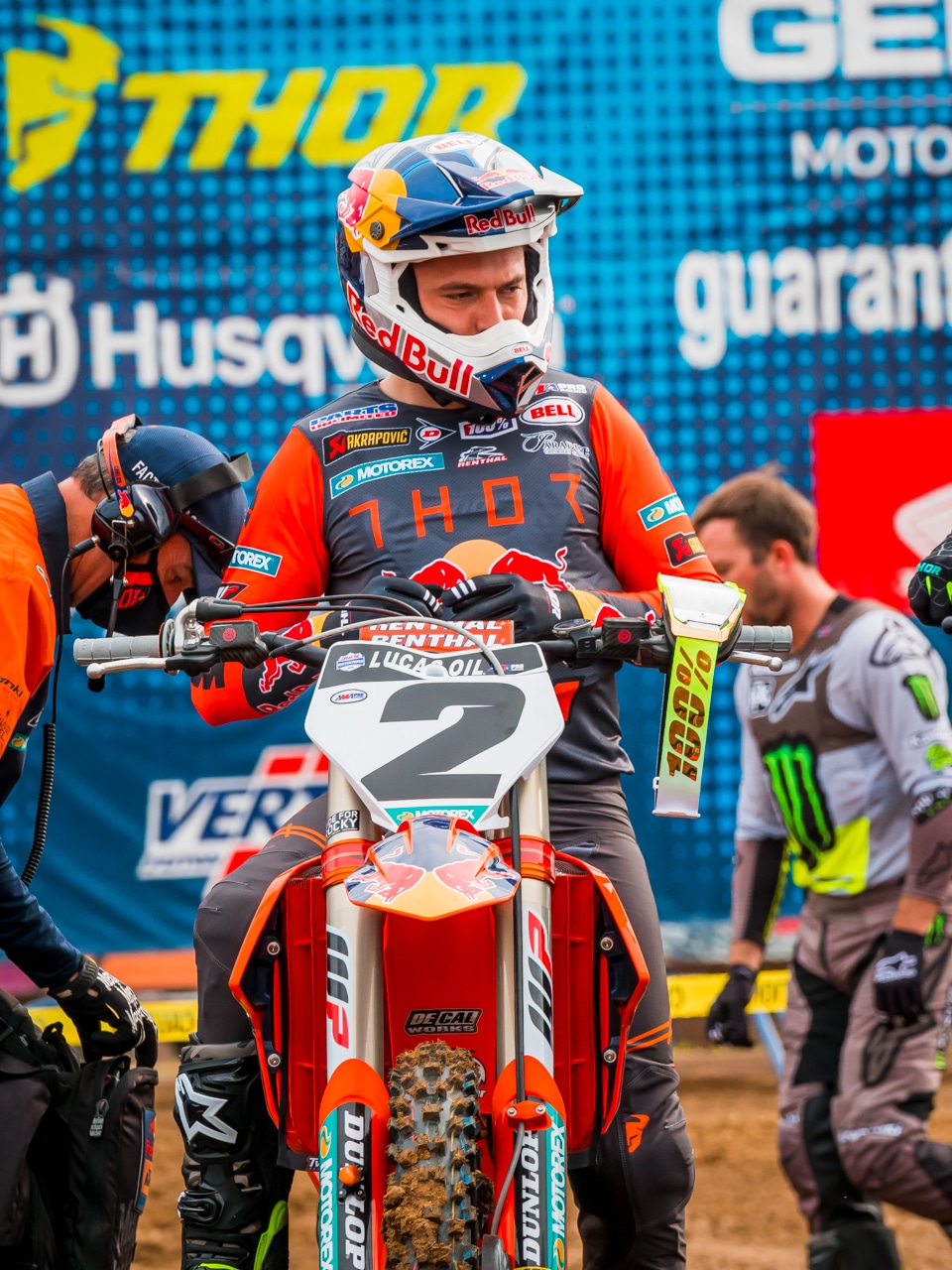 It was a three-way KTM battle in 7th through 9th.