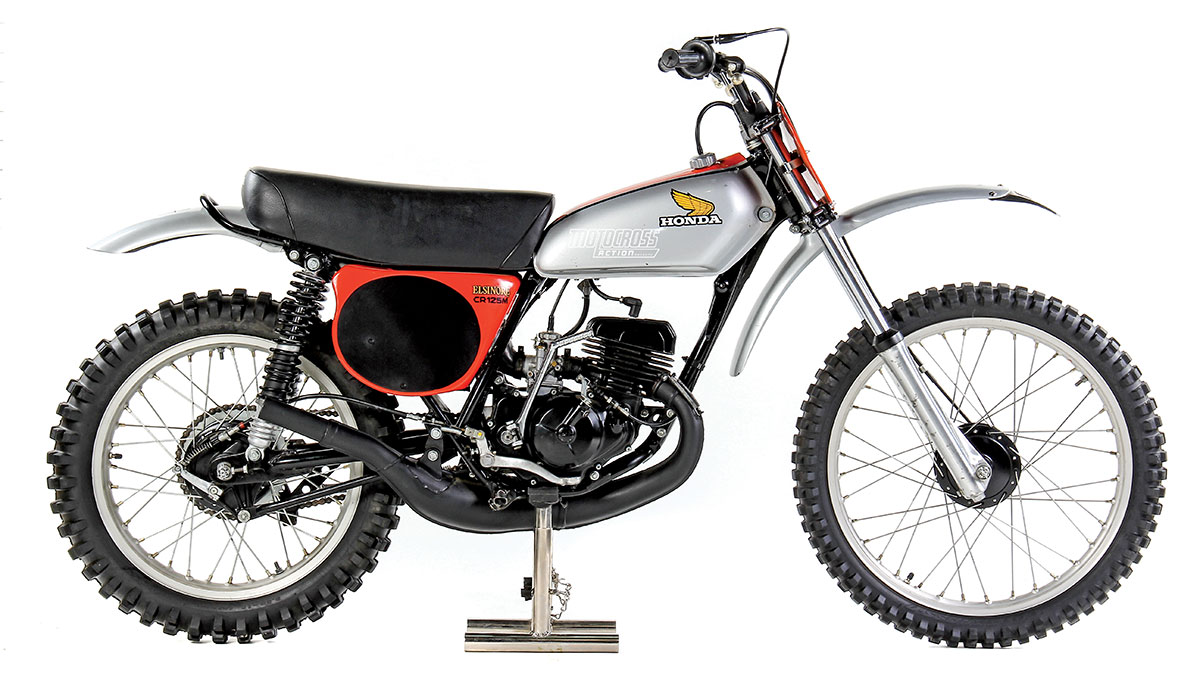 One year after introducing the 1973 CR250, Honda would follow with a game-changer in the motocross market—the 1974 CR125. As good as the CR250 was, the 1974 CR125 was far better. The “Baby Elsinore” was fast, shifted well and was easy to ride. Dealers would order them by the dozens, and they left the showrooms at an amazing $749 MSRP. The popularity of the first CR125, known colloquially as the “Green Striper,” fueled interest in the 1975 CR125 “Red Striper.” The nicknames came about because Honda changed the color of the tank for 1975 from silver with an Army green stripe to silver with a red stripe in 1975; although, the easiest way to tell a 1975 from a 1974 was the red number plate panels and shorter, unbraced and welded-on silencer. In 1976 the CR125 would be all red. Tahitian Red would be Honda’s color choice from 1976 to 1983 when they switched to Flash Red. In 1988, Fighting Red was introduced, which only lasted two model years. Nuclear Red was adopted in 1992, as Honda bounced around among varied red hues. The 1974 Honda CR125 propelled Honda to the head of the class, but it was a short-lived success as the relatively unchanged 1975 CR125 faced tough competition from the long-travel, high-horsepower Yamaha YZ125 and Suzuki RM125 models that joined the fray. And then, for some unknown reason, Honda stopped developing the CR125. Technically, the 1975 Honda CR125, with an $889 price tag (up $140 from the 1974 model), featured a 28mm Keihin round-slide carb, six-speed gearbox, four-way adjustable Showa shocks, leading-axle fork lugs, aluminum gas tank, true chromoly frame and under 180-pound dry weight. Sadly, Honda had awoken the growing American 125 motocross class with its revolutionary 1974 CR125, but let it slip away with warmed-over machines for the next four years.