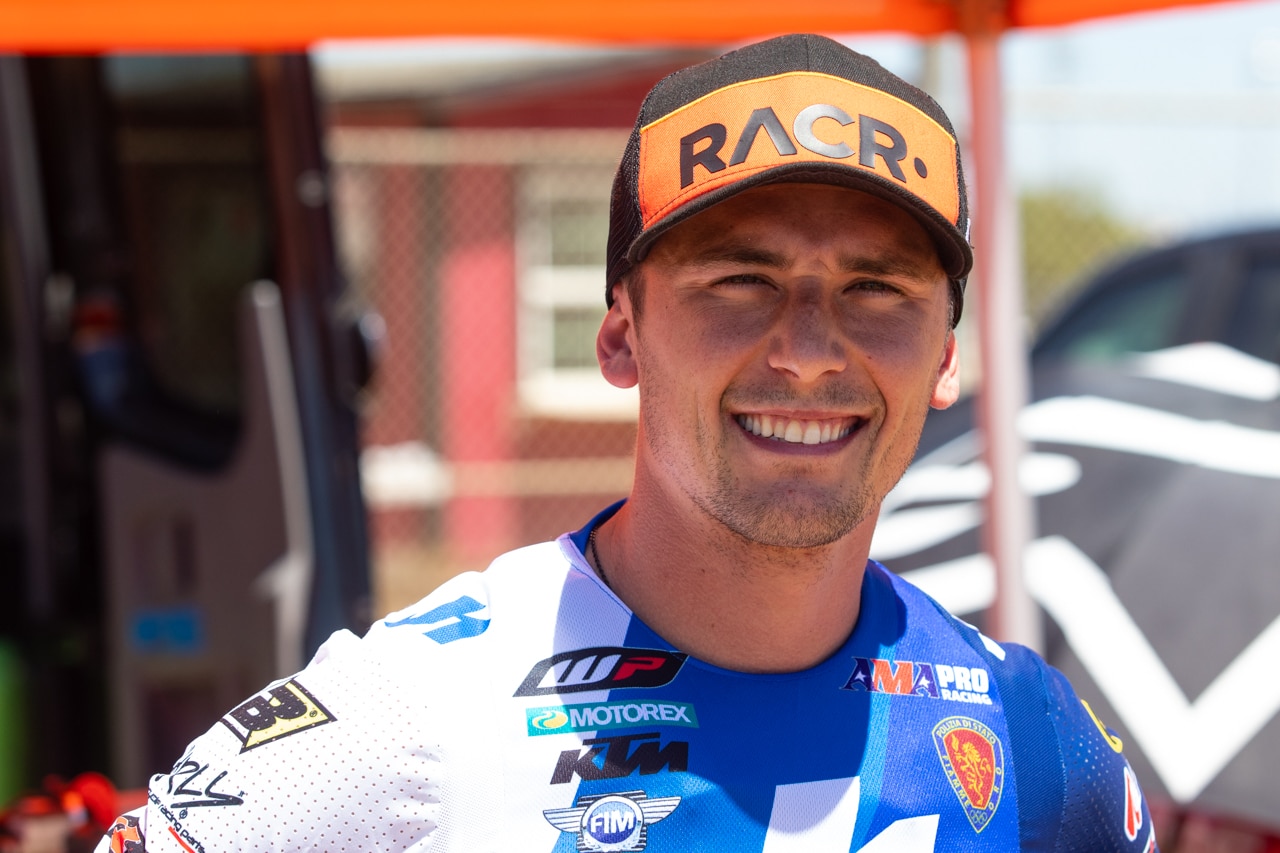 Alessandro Lupino is a 30 year old Italian racer who primarily competes in the MXGP World Championship. If you follow the series, certainly you’ve heard his name as he has scored podium finishes in multiple motos in the MX1 and MX2 classes. His most recent stand out result came at the MXGP of Pietramurata in his home country of Italy last season. There he finished third in the first moto behind Jeremy Seewer and Tim Gajser. With the help of fellow Italian racer Redondi Giacomo who lives in California and races the WORCS and NGPC series’, Alessandro is in California and is excited to use the Fox Raceway National as a warm-up for the MXGP season.

ALESSANDRO, YOU’RE IN CALIFORNIA FOR YOUR FIRST AMA NATIONAL. ARE YOU EXCITED? Yes, I’ve been riding in the 450 class for a while now, since 2014 in Europe. But this will be my first ever AMA race. I’m excited, I don’t expect anything from this race because I don’t know the level of the other guys, but I will do it for experience. Now we have three days of training this week and then Saturday we’ll have the race at Pala.

WHAT MADE YOU WANT TO RACE IN THE UNITED STATES? It was a crazy idea that came out and we said “Why not?” So we had some sponsors that helped us, KTM and Just1 Racing, so we said “Ok we can do it.” In two weeks the first MXGP race starts in Russia, so I will do the race on Saturday at Pala and then fly back on Sunday. I have the Italian Championship race next weekend and then Russia after. Alessandro (177) on the line next to Adam Cianciarulo during the Fox Raceway National #1 press day.

WHAT DO YOU EXPECT FOR THE RACE THIS SATURDAY? The format for one-day racing we don’t use in MXGP until last year unfortunately with the Covid situation, and in the European races (not MXGP) we do one day races. So I’m a little bit used to it, but it is a little more difficult, especially when you don’t know the track.

WHAT WOULD YOU SAY IS YOUR BIGGEST ACCOMPLISHMENT AS A RACER? I’m one of the guys who’s never been there for the win, but I was really good in the 85cc class when I won the Junior World Championship race in front of Ken Roczen and Eli Tomac in 2006 in Finland. I won, I think second was Ken and third was Tomac. I was pretty fast and then I swapped to the Pro class and I do some podiums in the MX2 class but never fought for the title, my best result for the season point standings was 8thoverall. But lately in the 450 class I’ve had good results, even last year at a race I made third in a moto, so it was pretty good. And of course, at the Motocross of Nations at Red Bud I rode really good. So I have some up and downs, I am more guised to ride on hard pack but now in Europe we have so many sand races and if you are not a sand rider it’s difficult to be competitive over there. 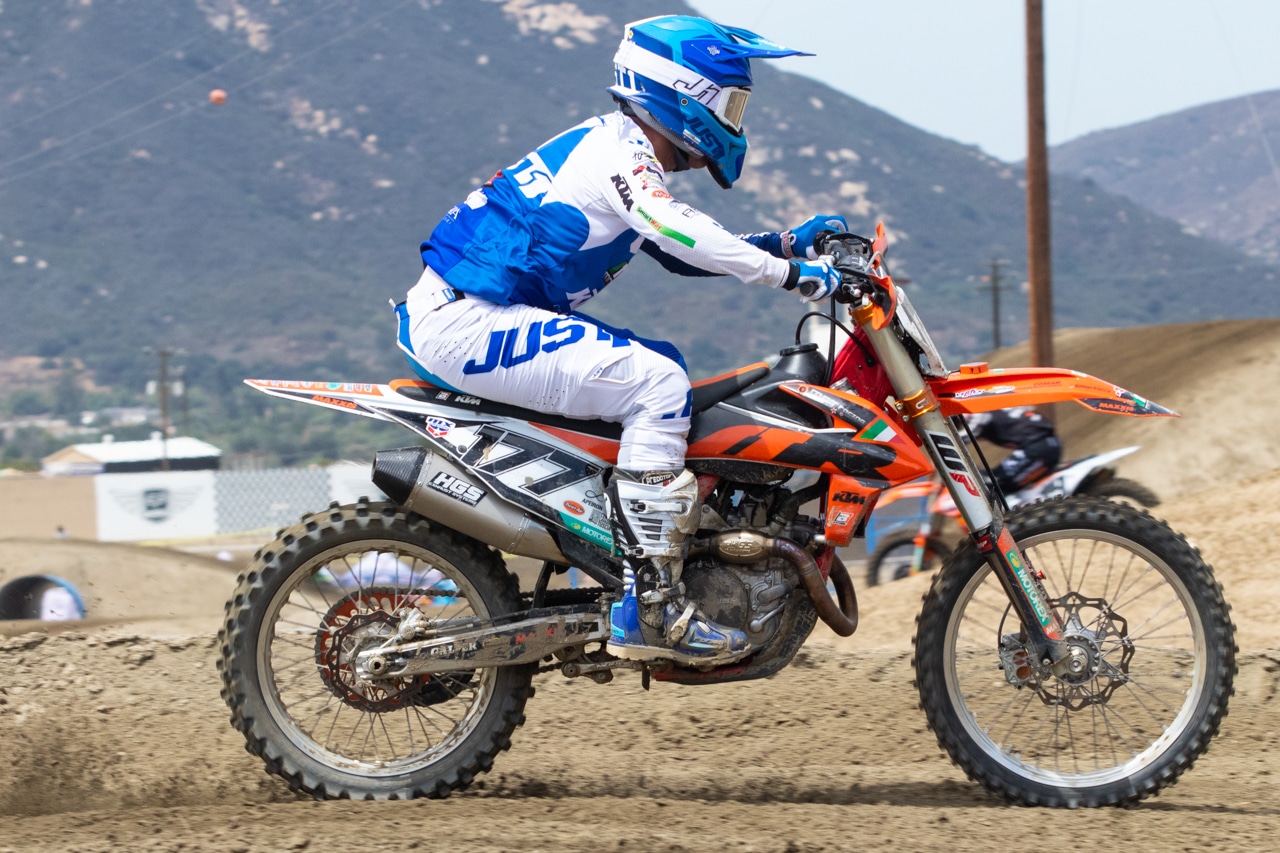 Alessandro came from Italy to California only one week before the National and will only be able to ride three times before the gate drops on Saturday. He brought suspension, handlebars, and an ECU with him and picked up the HGS exhaust from Bud Racing on Monday morning before going to the track.

HAVE YOU ALWAYS WANTED TO RACE IN THE UNITED STATES? In my life I’ve always said that I wanted to try it one time and now is the moment. I feel ready to do this step. To be honest, in 2006 I was here for one month with the Italian federation. I did two races on 85cc. One was at Glen Helen and the other was at Cahuilla. That was really fun, so I said that I want to go back when I am a Pro and see how this really feels. I watch every time the Supercross and Nationals, so I know how this works, but it’s difficult because you don’t know the level of the riders.

WHEN DID YOU MAKE THE DECISION TO COME HERE AND RACE? I start already four months ago, during winter. Because our MXGP calendar was changing quickly, before it would start in April, so it was not possible. But then in December they changed it and put the series opener in June. So we said, “we have time and we can do races.” Forsure doing races and starts is important, so we say we have this weekend that is free and why don’t we go there. We started to plan, but with Covid situation it was difficult and we didn’t get a Visa. So, in one moment we said, “we don’t go” and then, thanks to AMA, they helped us and figured it out with a Visa. So, one month ago we decided to go. 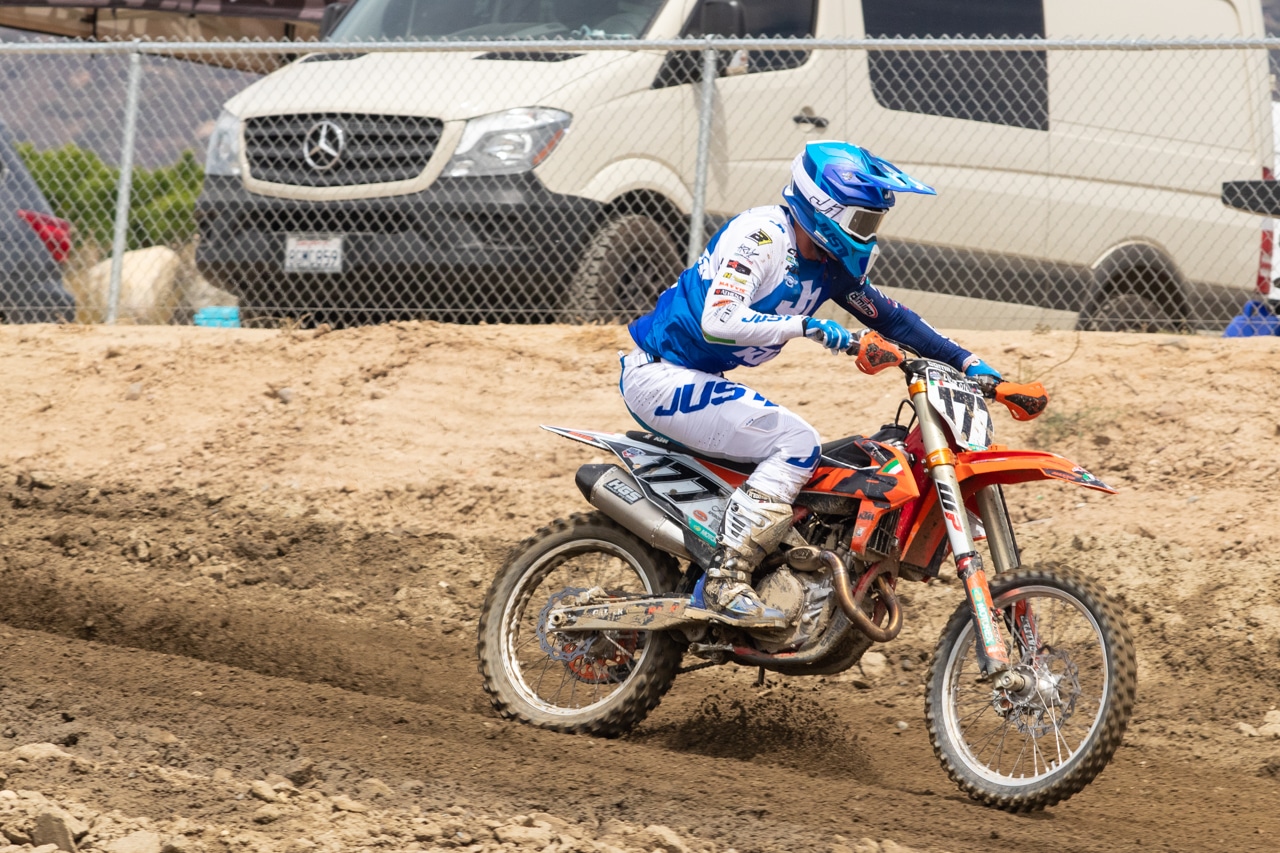 WHICH PARTS DID YOU BRING OVER HERE FROM YOUR MXGP BIKE? I came from Europe with suspension, WP sent us my factory suspension what I use in Europe. Then we had the handlebar, triple clamps, pipe, ECU and the rest we ride with is a stock bike. That’s it.

BEING AN ITALIAN RACER, ARE YOU FRIENDS WITH TONY CAIROLI? Yes, we are really good friends. He’s helped me and I like his clothing company, RACR, and I use it a lot. We train together now much more because I’m with KTM. Before it was not possible, but now, even during this winter we rode at least one or two times a week together. It’s cool because we are friends so we can push each other. Otherwise in Europe, you don’t see too many Pro riders who ride together. It’s difficult to find in Europe one track where all the Pros are riding. Everyone goes by himself, so it’s good you can push each other. Tony is riding good at the moment; I think he will do good this season.

DID TONY CAIROLI HELP YOU SWITCH FROM YAMAHA TO KTM FOR 2021? Yeah, he helped a lot when I spoke that I wanted to change to KTM. I rode last year for Yamaha with Gebben (Team Gebben Van Venrooy Yamaha Racing) and the last time I rode for KTM was in 2006 on 85cc. So, I wanted to try it one time in my life and I think it was a good move because I really like the bike. Alessandro leaning into a soft rut at Pala.

CAN YOU COMPARE THE YAMAHA AND THE KTM? I like the engine of the KTM, the torque is very crazy. I think all of the Japanese bikes don’t have that. The frame is good, but you have to understand it. The first month was crazy, it was not possible for me to ride. But once I understood how it worked, it was good.

WHAT WAS DIFFERENT ABOUT THE FRAME THAT YOU FELT? I felt it especially in the corners. I think the in the first days I crashed 3-4 times each time. In the corners, the front end is really light and easy to turn, so you think you can go faster inside. With Japanese bikes you can feel both wheels on the ground, but with KTM you feel more weight on the back wheel. The front is really light, so you don’t feel it, so it’s really easy that you lose the front.

YOU’RE ALSO APART OF THE ITALIAN POLICE FEDERATION, HOW DOES THAT WORK? In Italy we have normal police, and we have a sport group. We have about 10 people who race motocross, enduro and people who work on pit row. When we have Italian GP races, we ride with Italian Police logos on our jersey. But when we are out of the country we ride with normal team clothing. 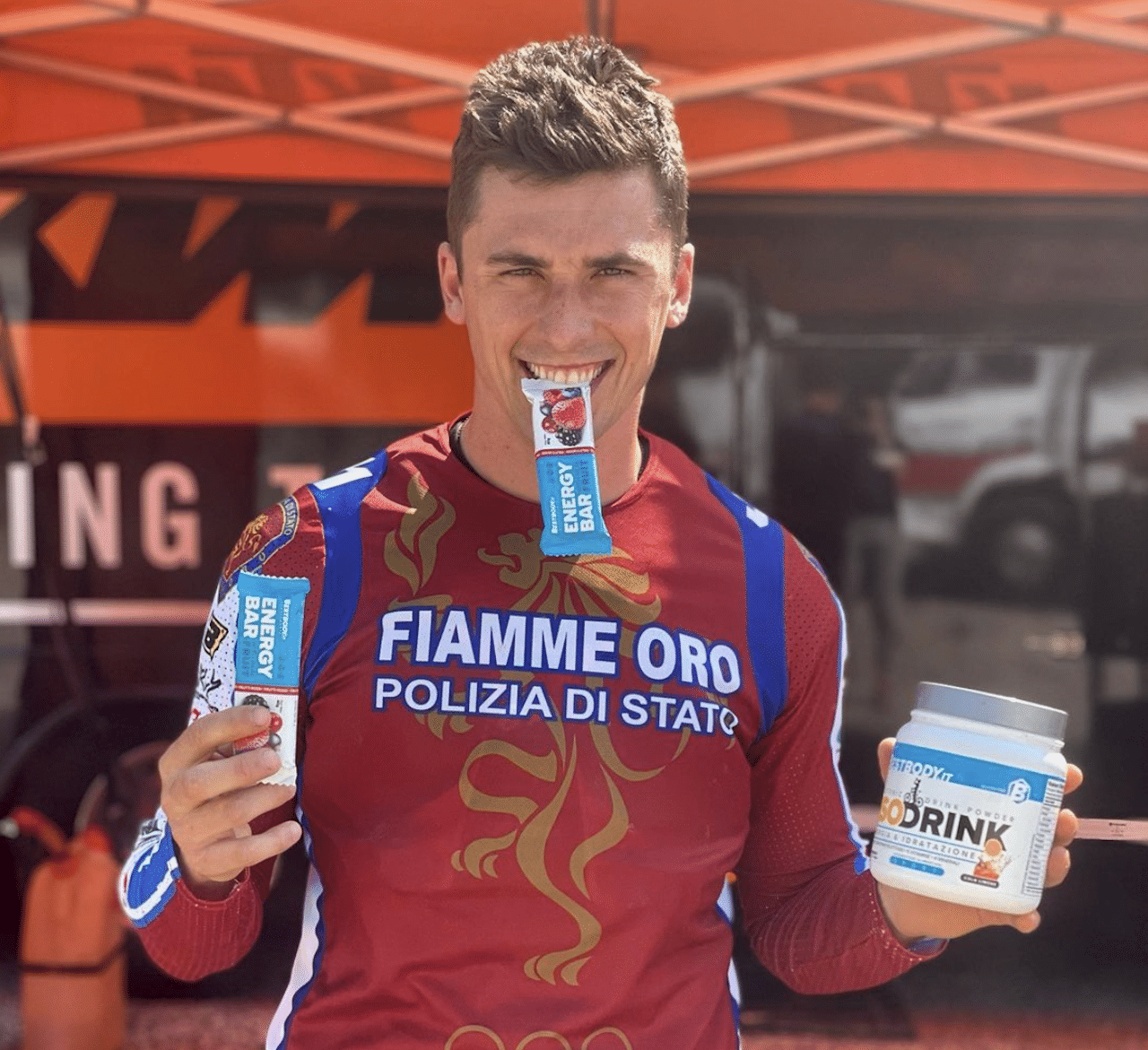 Alessandro wears this special jersey when racing in Italy to show that he’s apart of the Italian Police Force.

DO YOU WORK AS A POLICE OFFICER? OR JUST HAVE AN AFFILIATION WITH THEM LIKE A SPONSOR? I’m like a real policeman, I have a gun and everything. But while I’m doing the sport group, I don’t work like a normal police officer. We do the sports side of the police, but then when you decide to stop racing, you can choose if you want to go and work as a police officer and I think I would want to do that when I retire.

WILL THE FOX RACEWAY NATIONAL BE A GOOD WARM-UP FOR THE MXGP SEASON? Forsure, to come here, I get prepared for hot weather. Right now, it’s a little bit colder in Europe, but in one month we’ll be warm. So I get used to the warmer weather earlier and I get to do another race before the MXGPs start.

DO YOU HOPE TO COME BACK TO THE U.S. AFTER THIS WEEKEND? We’ll see how it goes, but never say never. We’ve seen many European riders come over here, so why not. If it’s possible, it would be nice.