The third round of the 2020 AMA Nationals is underway in Crawfordsville, Indiana at Ironman Raceway. After brutal track conditions at Loretta Lynn’s Ranch for the first two rounds of the 2020 season, riders have been blessed with clearer skies and deep ruts. Ironman Raceway features large hills and massive jumps but this time around the track is deep and doesn’t take very long for lines to form in the ground. The 250 class has been very exciting to watch with riders battling for the 250 points lead and featuring Jeremy Martin, Dylan Ferrandis, and Alex Martin being the top three in the points lead. Shane McElrath threw down the fastest lap time of the day for the 250 class with his teammate Dylan Ferrandis in second and Jeremy Martin in third with two seconds behind. Here is how the 250 class performed at the third round of the 2020 AMA Nationals. Brandon Hartranft makes his first top 3 of the season.

Jeremy Martin grabbed the holeshot and right off the start of the second moto, McElrath went down taking Ferrandis and McAdoo with him. A few laps in, Ferrandis already made his way back up to 14th after being in dead last. Jeremy Martin lead the race with Justin Cooper just behind him. After 3 laps, Ferrandis made up more than 3 quarters of the field and charged into the top 10. Brandon Hartranft got a good start like moto 1 and sat in 3rd and Mitchell Harrison sat just behind him in 4th place. FC Honda riders Jett Lawrence and Jo Shimoda put the pressure on Mitchell Harrison and eventually the two made the pass. However, Ferrandis was still on the charge and nothing was stopping him from making his way all the way up to 5th place. With less than a minute left and two laps, Ferrandis already had his eyes set on the two riders in front of him. Hartranft and Lawrence didn’t really pose a threat to the Frenchman and with only two laps left, made his way to a podium position. Jeremy Martin reached the checkered flag first followed by Justin Cooper and from last to third, Dylan Ferrandis. 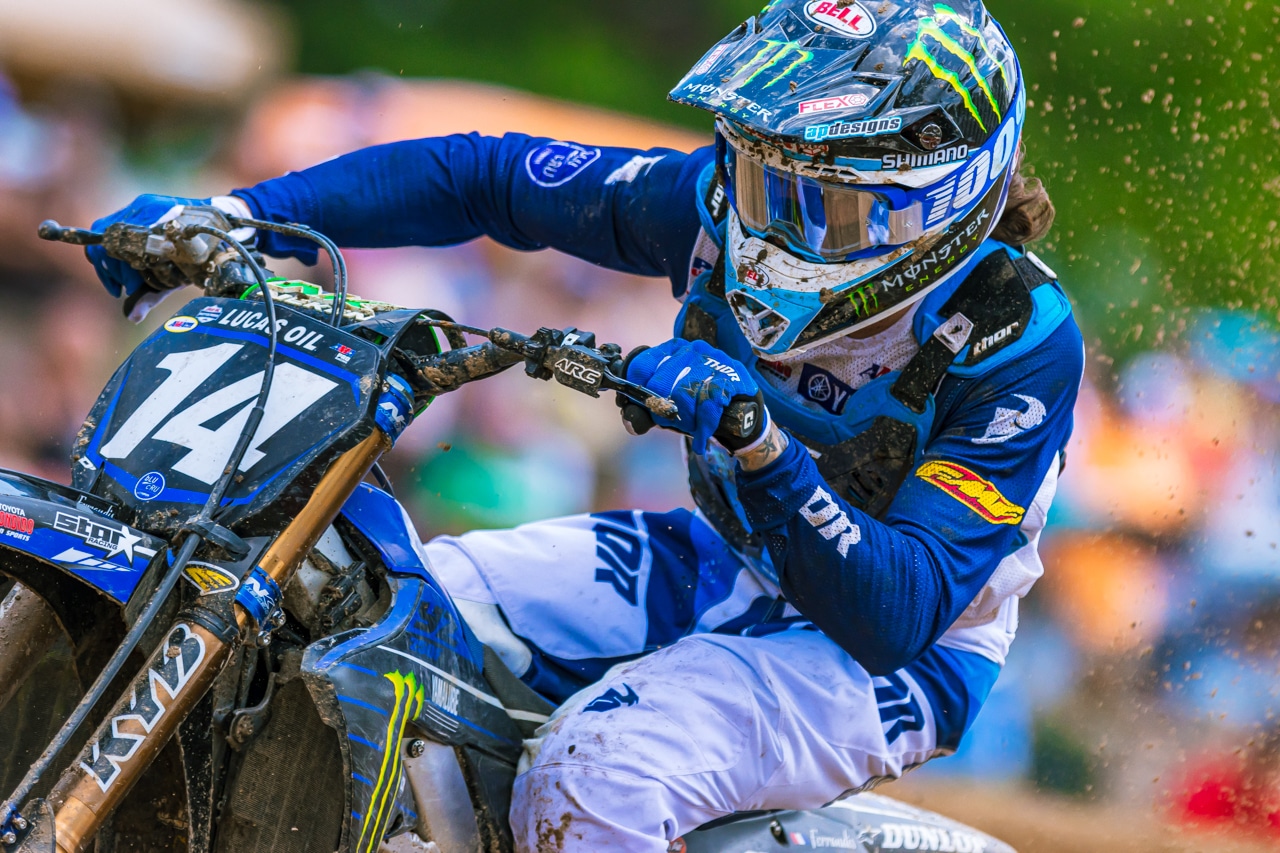 Ferrandis grabbed the holeshot with Jeremy Martin on his tail with Mitchell Harrison chasing in third. After a couple of laps, Brandon Hartranft makes the pass on Mitchell Harrison as he charges into the top three. The top qualifier, Shane McElrath got a bad start and was stuck in the 10th position for quite some time. Some battles ensued in the top 10 between Alex Martin and Derek Drake. On the 5th lap, Alex Martin rides off the track pushing him all the way back to 10th. It didn’t take long for Dylan Ferrandis to master the track as 5 laps in, he already managed to obtain a 10-second lead over the rest of the field. RJ Hampshire went down on the 6th lap and dropped all the way to 11th place. McElrath made his way up the pack and battled with Harrison for 5th place. Shane took the fast line into the rollers and passed Harrison with ease after struggling for a couple of laps. Hampshire and Cooper started running the fastest lap times besides Ferrandis and the two started making their way up the pack. Even more battles ensued when Hampshire eventually caught McElrath for 5th place as McElrath started losing his speed. With two laps to go Brandon Hartranft still held onto his 3rd spot in the race, one position better than what he had qualified in. Dylan Ferrandis gets first place in the first moto with more than a 20 second lead above Jeremy Martin who got second.