Mike LaRocco atop his factory KX500.

Mike LaRocco’s career spanned a sweet spot in motocross history. When he started earning AMA points in 1987, Pros like Ricky Johnson and Jeff Ward were in their glory years. By the time he retired in 2006, Chad Reed and James Stewart were racing the 450 class and Ryan Villopoto was winning his first 250 championship. LaRocco wasn’t alone in his era. Supercross king Jeremy McGrath started two years after LaRocco. McGrath retired in 2006, the same year LaRocco did. Racing Supercross in the McGrath era was tough, and few riders broke through to take wins. LaRocco was one of the few to do so. In his career he finished with 13 Supercross wins and 87 Supercross podiums. While LaRocco focused on Supercross in the latter years of his career, he had greater success in the AMA Nationals. He made 73 podiums, 19 of them wins.

LaRocco would win his first AMA Championship in 1993. As the series started to focus more on the 250 and 125 class, the 500 class was dwindling. The 500cc class was part of the AMA Nationals from the first race in 1972. It had been the only class in the World GP Series prior to 1957. At the height of its popularity, the class was on every race on the schedule. By 1986, it slowly was being eradicated from the schedule a few races at a time. 1993 would be the last year the class would be on the AMA National circuit. That didn’t stop LaRocco from entering the four race series. He started out the 1993 Supercross season with a bang. After a swift charge through the pack, he pressured Damon Bradshaw into a mistake in the whoops and took the first heat win at the Orlando opener. The main event played out just like the heat race for LaRocco. This time, however, it was teammate Mike Kiedrowski who would lose the lead. Sensing the pressure, the “MX Kied” bobbled in the whoops opening the door for LaRocco to pass. The Florida win was a strong victory; however, as the season wore on “LaRocket” couldn’t keep up. Yellow plates aren’t something you see anymore now that the 500 class is gone.

At the Houston Supercross, he had a terrible starting position. While he was able to finish in sixth position, it reflected how the rest of the season would go. Jeremy McGrath would win the championship and LaRocco only earned 12th overall. This was despite him finishing in the top five for most of the races. The AMA Nationals were a new beginning. While they started during the Supercross season, the bulk of the races happened after the checkered flag was flown in Vegas. The first eight big bike class races were in the 250 class and the last four were in the 500 class. When the gate dropped at Gatorback in February, LaRocco was absent. The next race was at Southwick. While teammate Mike Kiedrowski had the fire to take on defending champion Jeff Stanton, LaRocco would edge out privateer John Dowd and hold third position. LaRocco consistently made the podium, but he couldn’t shake Kawasaki teammate Kiedrowski. That changed at the last race of the 250 season. 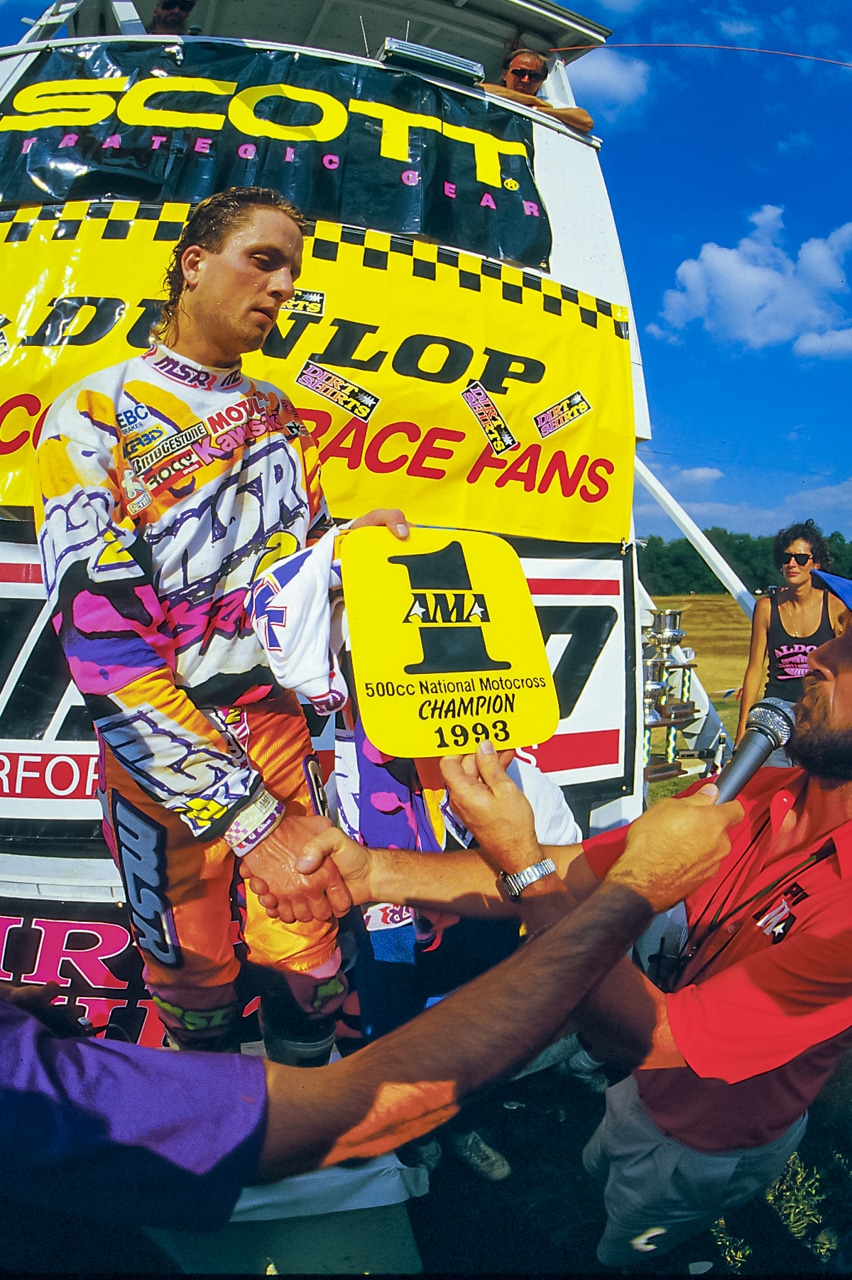 Glen Helen was new to the series that year. The race turned into a single moto instead of the two moto format, due to extreme SoCal temperatures. Mike LaRocco would not only win the single moto event, but take his first 250 National win. He was still 59 points short of Kiedrowski when the 250 series ended. Just like the year before (on a 125), he was forced to take second place. However, the 1993 season wasn’t quite over. There were four 500cc races to go. LaRocco dominated in the first race at Washougal, going 1-1 for first overall. While he would win the first moto a week later, Jeff Stanton took the overall. Other than Jeff Stanton, LaRocco was the only rider to finish on the podium all four races. Two wins in the final 500cc season was enough to beat out defending champion Mike Kiedrowski. With a championship under his belt, LaRocco finally put a chapter behind him. He went on to win the 250cc National Championship a year later. 2022 INDIANAPOLIS SUPERCROSS // TAKE A WALK THROUGH THE FACTORY PITS