HAVE YOU SEEN THE NEW MXA? YOU SHOULD BECAUSE IT’S JAM-PACKED 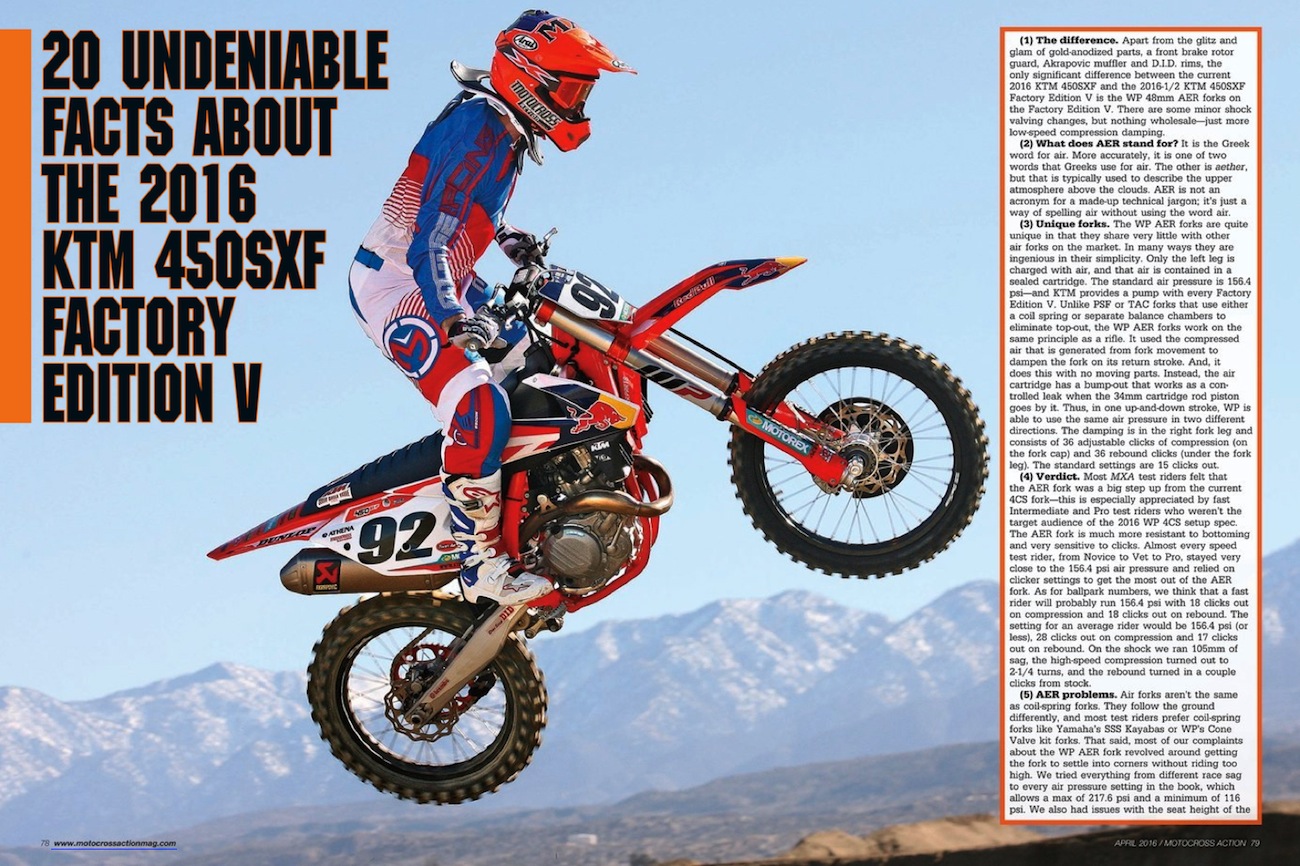 How much do you know about the 2016 KTM 450SXF Factory Edition. Wanna know more? We ride it, race it, test it, tear it down and tell you all the things you’ll never find out anywhere else. Our cover Kawasaki KX250 looks super clean and punches out over 40 horses. Just like in gladiator school not every warrior makes it to the next round. The injury rate is staggering as the riders fight for glory—and enough money to pay their medical bills. We don’t just show you giant spread photos of the six major works bikes, we have their mechanics tell you the inside scoop. You may think of Dubya as a wheel builder, but they want to be known for all of their products—so they built a showcase Yamaha YZ450F—with the help of partners Joe Gibbs Racing, FMF and Cycra. How rare are 2016 TM 144MXs? Well, they are available at TM dealers, but if you got your hands on one it is unlikely that more than 19 other racers would know what it felt like. Exotic, rare and unusual—that’s the epitome  of cool. The Tech 1 is Alpinestars’ least expensive motocross boot. Would you be surprised to find out that it is also a very good boot—and anyone who saw you wearing it would think it cost $550.00 instead of $199.95. When we look for project bikes to test, we look for tuners and builders that specialize in that brand or model. No one knows more about Husqvarnsa (Swedish, Italian or Austrian) than Dick Wilk from Dicks Racing. Read this story to find out what he knows. After Davi Millsaps left Team Kawasaki he bought a Suzuki RM-Z450 to prepare for an assault on the AMA 450 Nationals. He never showed up on the yellow bike, but we tracked Davi’s RM-Z down and put it to the test. It’s hard to describe the Tube Saddle. It’s  like 1/3rd of a mousse. It’s like a rim protector. It helps alleviate pinch flats. Plus, it allowed us to race with 8 pounds of air in our rear tire. Carter Dubach is the son of former Supercross winner Doug Dubach, who was Yamaha’s official test rider for years. So, we brought young Master Dubach in to test the 2016 Yamaha YZ85. The acorn doesn’t fall far from the tree. CCM stands for Clews Competition Machines. Built on the ashes of the factory BSA racing department, Alan Clews kept the four-stroke world enthralled while it waited for the Yamaha YZ400F 22 years later. Shot Racegear is new to the USA, but we think they are on to something. Not only are they offering super affordable race gear, but when we complained about something on the gear we were testing—they stopped the production line and made a running change to the pants. That’s impressive. Who’d a thunk a few years ago. MXA and Ricky Carmichael hanging out together at the farm. We tracked down Pierre Karsmakers (only Jody gets to call him Pepe) and had him tell us what it was like to be the hired gun of American motocross in the 1970s.

If you had subscribed to MXA, the March 2016 issue would have been placed in your mailbox by the reliable hands of a uniformed agent of the U.S. Government. And you should want to subscribe so you could read all the details of the the TM450FI-MX, Yamaha YZ125, Husky FC350, Yamaha YZ450FX offroad bike  and find out how much money we spent making a 10-year-old RM125 two-stroke new. Or, you can wait for these tests to appear on the internet…in a couple months. Your choice.

Do you subscribe to MXA? You should. We know that you think that print magazines are dead and that the internet will fill the void, but most of the stuff in the current issue of MXA won’t appear on the web for several months, if at all. Luckily, you can get all of MXA on your iPhone, iPad, Kindle or Android by going to the Apple Store, Amazon or Google play, but better yet get the Digital desktop version at https://hi-torque.com/product/motocross-action-digital-edition/ for $9.99 a year.

The MXA test riders prefer the print version and not just because it is delivered by a uniformed employee of the U.S. Government, but because for only $19.99 you get 12 issues and a free $25 Gift Card from Rocky Mountain ATV/MC. That means that there is a profit to be made in this deal for you. For the Print magazine go to: http://hi-torque.com/product/subscribe-to-motocross-action-magazine/

IN THE PITS: TORONTO