Unless you’ve been living under a rock, you know that the MXA wrecking crew has been harping on Husqvarna to make its FC250, FC350 and FC450 run as crisply as its almost identical KTM brethren. All of our plaintive cries have fallen on deaf Austrian ears, thus we have been forced to make the necessary mods that Husky’s engineers refuse to make.

In stock trim, the Husqvarna and KTM deliver their power with a uniquely different feel. The Husqvarna has muted low-end throttle response, while the KTM is more responsive and more alive off idle. On the dyno, both of these engines make their peak horsepower as close to peak rpm as possible. Thus, having slower throttle response isn’t a damper on peak horsepower. But, if you start slow, it is going to take longer to get up to speed—and that defines the big difference between the Husky FC250/350/450 and the KTM 250/350/450SXF.

The KTM jumps up into the meat of its power quicker, while the Husky delivers a steady vibrato of power. They both make big horsepower numbers, and they are both flat-out powerbands. If you aren’t revving the KTM or the Husqvarna, you aren’t getting all it has to give. Most MXA test riders prefer the KTM’s snappier throttle response and quicker rev, but “most” is not all. On the other side of the coin, there are Vet riders who find the metered delivery of the Husqvarna FC350 to be more usable in off-cambers, ruts, concrete starts and tricky switchbacks. But if push comes to shove, we think the KTM powerband is racier—and these are race bikes.

It is important to note that there are no cam, valve, piston, throttle body, fuel pump, case, ignition or crank differences between the 2018 KTMs and Husqvarnas. They share the exact same mechanical parts, which begs the question: “Where did the throttle response go on the Husky?” The answer? It’s not the engine that mutes the Husqvarna’s powerband, it’s the parts that are downstream from the engine. Culprit number one is the Husky’s plastic airbox. Suspect number two is the choked-up, ice-cream-cone-shaped restrictors in the FC350 and FC450 mufflers. Third in the lineup is the tall gearing. Fourth on the wanted list is the backfire screen. We took our 2018 Husqvarna FC350 and put it on MXA’s easy-peasy hop-up plan. The simple fix is to drill holes in the Husqvarna airbox covers. Motorcycle engines are air pumps. They draw air in, combust it with fire and blow it out the exhaust pipe. The more air you draw in, the more you can blow out. The byproduct of all of the sucking and blowing is horsepower. The Husqvarna’s plastic airbox suffocates the intake of fresh air into the Husky engine and is detrimental to throttle response. Thus, the identical engine, equipped with a KTM airbox, is snappier and more responsive. This is where Snap-On, Makita and Dewalt come into play. Break out the drill. But, it is not as easy as it sounds. We conferred with the Rockstar Husqvarna team to find the correct way to open up the plastic airbox. Where you drill the holes is as important as drilling them. We cut the right sid eof the airbox open. The plastic is very thin and is easily removed with a box cutter.

Step one is to remove the right-side panel. This exposes the right side of the airbox. We cut the airbox open with a box cutter. The plastic on the sides of the airbox is very thin. Rockstar Husky recommends removing the airbox from the frame and trimming as much of the interior plastic obstruction away as possible; however, you can just cut the exterior side out to get more air in and keep dirt and water out. On the right number plate, we drill a large hole that aligns perfectly with the opening we cut in the right side of the airbox.

With the right side of the airbox opened up, we marked where the straightest shot into the airbox was on the right-side panel and then drilled a 1-inch hole in the side panel so that it lined up perfectly. We only drilled one hole, but if we had cut more of the airbox structure away, we would have added more holes. We followed the Rockstar Husqvarna team’s advice and six holes in a triangle pattern. It is important where you drill these holes.

On the left-side panel, we followed Rockstar’s advice and drilled six 1-inch holes in the panel in a triangle shape, behind where the air filter was located. Do not drill holes directly in line with the air filter. They work best when they are behind the air filter. Use our photos as a guide. 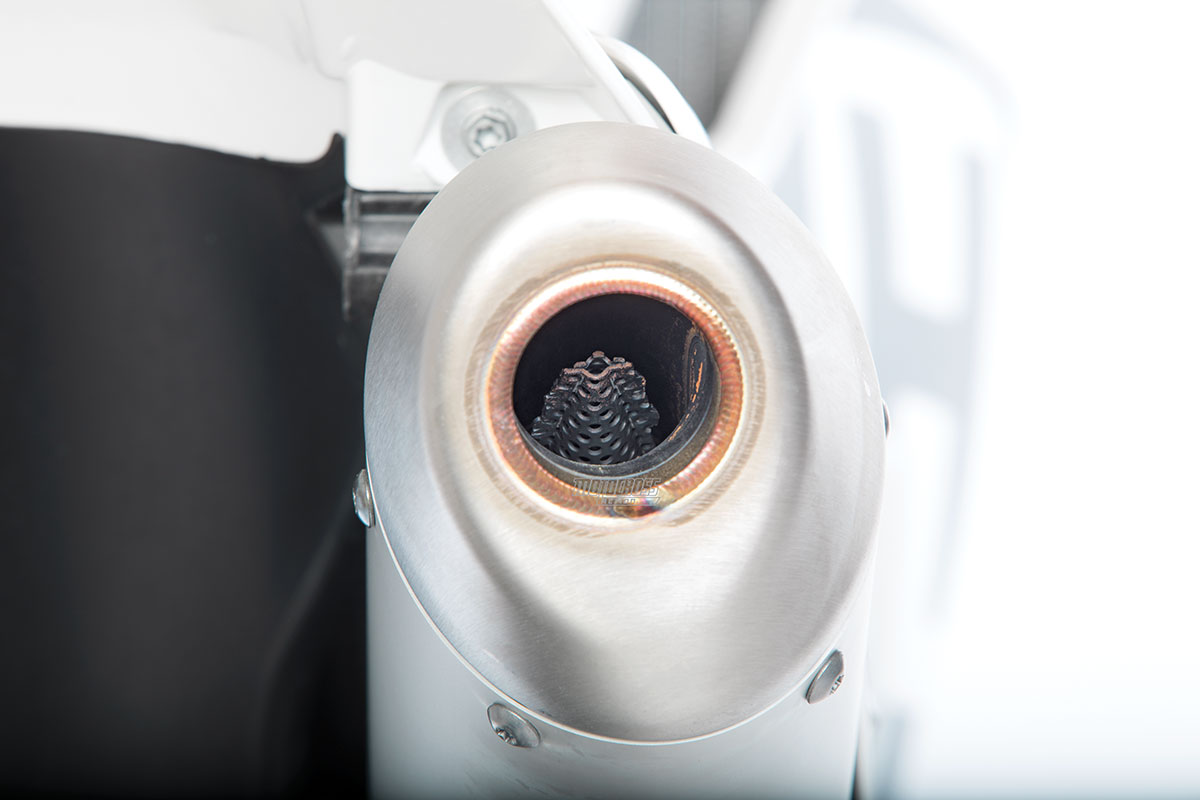 This ice cream cone shaped piece of perf-core is found in the FC350 and FC450. It is a restrictor that was once used on KTMs back in 2013. KTM dropped it, but Husky picked it up. We dropped it again.

Five years ago KTM put ice-cream-cone restrictors into its mufflers on the 2013 models. KTM dropped them for 2014, so we were surprised when they were revived on the Husqvarna FC350 and FC450. The FC250 does not get any restrictors in its muffler. Since the straight-through FC250 muffler is identical in length, shape and core size to the FC350 and FC450 mufflers, we replaced our FC350 muffler with the FC250 muffler.

It should be noted that we could have used any aftermarket slip-on muffler from DR.D, Pro Circuit or FMF, but we had an FC250 muffler sitting on the workbench and felt that it would allow for a better cross comparison to the stock FC350 muffler. 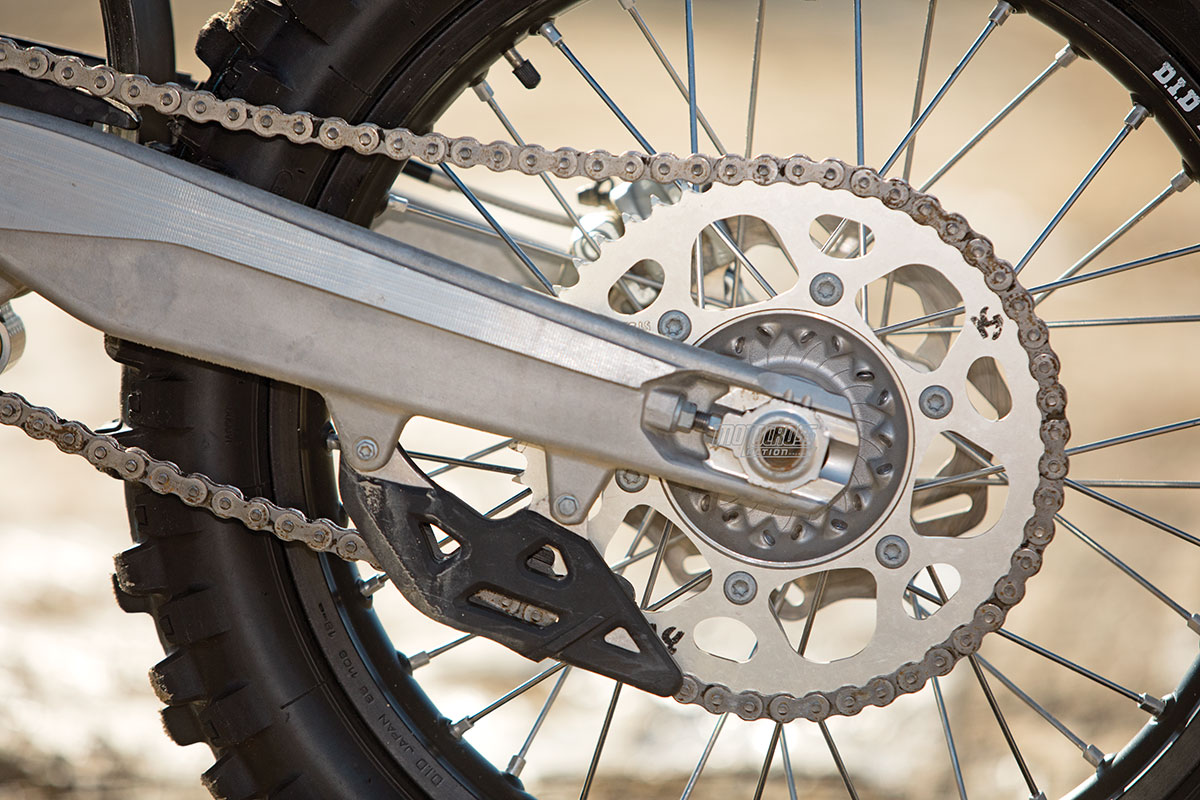 On the KTM 350SXF and Husqvarna FC350 we lower the gearing by one tooth, but it isn’t uncommon to find 350 riders with two tooth bigger rear sprockets. The lower gearing offers more drive out of corners and makes the 13,400 rpm peak easier to get to.

The only MXA test riders who like the stock KTM 350SXF and Husqvarna FC350 gearing are our former AMA National Pros. The Vet and Novice test riders prefer to gear their 350s down. For most tracks, they add one tooth to the rear sprocket, and, for tighter tracks or slower riders, they add two teeth. It should be noted that one of the main goals of gearing the 350s down is to be able to get the engine to 13,400 rpm as quickly as possible. Peak power is at 13,400, and if you don’t get there, you won’t get all the horsepower that the FC350 and 350SXF have to offer. WHAT DID WE THINK?

Although throttle response is not always noticeable on a dyno, we were able to see a 1-horsepower gain across the board. Additionally, on the race track, our modded Husqvarna was snappier, more responsive, quicker-revving and racier. Job well done.