This is the original 1993 Donnie Schmidt Chesterfield YZ250. Below is the replica.

I follow up on what’s happening on the Motocross Action web page every morning to get my MX fix! I am also a die hard two-stroke fan as I was fortunate enough to grow up racing when two-strokes still ruled the roost. I always preferred to race 125’s when I was younger as they were so rewarding when you had them dialled in.

I also enjoy putting old bikes back together that I used to watch on the Grand Prix and AMA circuit from the late 80’s and early 90’s. Attached you will find one that I have recently completed as a replica of Donnie Schmidt’s 1993 Chesterfield YZ250.I know it wasn’t a successful year for him as it had been the year before, but I have not seen any decent restorations done of this bike so decided to go for it. Below is a little story about the rebuild and what went into it:

This is the replica. Can you tell a difference?

I decide to restore this bike as a Chesterfield Team bike for two reasons. One was because I have only seen lots of replicas of Donnie’s 1992 championship winning bike and the other reason was because I was not exactly wild about the look of these bikes when they came out with their wild colors and magenta purple frames in the 90’s!
I found the bike on a used goods site similar to eBay for a reasonable price. As it turned out the bike was still in very good condition and the owner had made an attempt to restore it himself. The engine had already been rebuilt which saved a lot of time and money. As for the rest of the bike, it was pulled down completely. The engine was just given a cosmetic overhaul with a fresh coat of paint and some newly plated bolts. A set of Boyesen reeds and a 38mm Keihin Air Striker carb were added. The reason for the carb was because someone had replaced the original with a Mikuni from a much older model.

The frame was sand blasted and re-powder coated black. All the bolts where re-plated and any missing ones were sourced at the local bike wreckers. The plastics was refurbished and reused where possible and if they weren’t I replaced them. I had Racestar Graphix, a local company who designed the graphics kit. Evo MX in the UK supplied me with a replica seat cover. I fitted new Excel rims with Buchman stainless steel spokes. My local Yamaha dealer supplied me with any OEM parts that were still available. If I couldn’t get parts from them I sourced them myself with the help of eBay and other aftermarket and OEM parts suppliers. Arrow was one of Yamaha’s big sponsors back then, however, as far as I know you cannot get any of the old products that they used to make, so alternatives had to be used when it came to the exhaust and handlebars. For the pipe and silencer I used a FMF Gnarly pipe and a Powercore 2 silencer. Bars are Pro Taper SE ¾ inch. DC Plastics was kind enough to handle all the parts that I had sourced in the states and had them shipped to me as I am a supplier of foot pegs to them. The Arrow pipe was impossible to find. A tried-and-true FMF pipe was put in its place.

Once all my parts had arrived I started piecing it back together over the course of a year. It took a lot longer to get it done as I might have liked, but work keeps us from these things! I do a lot of the cleaning and fabrication myself as my father and myself own a laser cutting/fabricating business. This also allows me to re-make a lot of parts that need replacing. I am really impressed how it turned out and have had a lot of people tell me not to ride it and just to display it as it looks too good to ride. So I have been in two minds whether to ride it or not. PS: I am also in the process now of restoring a 1989 Damon Bradshaw Yamaha YZ125 as close to what it looked like as possible. Top of the line wheels aren’t always in the budget, but Dubya USA Edge wheels were designed to be durable, reliable and affordable. Each Edge wheel set is built on a durable forged aluminum Edge hub, which comes in blue, red, green and orange. The hubs are laced to   black or silver Excel Notako rims with stainless steel Bulldog spokes and nickel-plated steel nipples. Each wheel is pre-assembled in Dubya USA’s southern California facility by the same technicians who assemble all of Dubya’s professional team wheels.  $639.00—www.dubyausa.com or (714) 279-0200. Jamie Ellis, the commander and chief at Twisted Development Racing has been around the industry for many years and I’ve known him for a few of them. I first started taking my bikes to Jamie when he was still building engines and bikes from his garage in Murrieta. When he started growing, he eventually named his business Twisted Development Racing. I didn’t think it was too catchy at first, but Jamie has succeeded in growing his business into something very respectable in the industry today. Everybody in the pits, especially the privateers, know they can take their bike to Twisted and it’ll be running in tip-top shape afterwards. I brought my FC250 Supercross and motocross engines to Jamie as well as my FC450 engines and I never had a reason to complain. I also didn’t worry about comparing my bike to the factory bikes, I was always confident in my engines and I knew if I wasn’t winning, it wasn’t my bikes fault. Fast forward to today, with my job at MXA, I am constantly learning and growing as a test rider. On Friday, Jamie and I went out to Fox Raceway (previously known as Pala Raceway) to test out the new ECU map settings that Jamie developed on the dyno at the Twisted Development shop in Murrieta. Jamie worked on the stock Kawasaki KX250 ECU to improve their settings for the customers who wanted a cheaper upgrade and he also made settings on a Vortex ECU for his more serious customers. We also used our FMF Racing Factory 4.1 RCT Titanium exhaust system for back to back comparisons with the stock exhaust on the different ECU settings. Jamie told me he was going to put me to work when I got to the track and he wasn’t kidding. Jamie also suited up and spun a few laps with me, and by the time we left the track at 2:30, we had put 1.9 hours on the bike. I was tired and sore, but it was a blast. I’ll have a full product test on Twisted Development’s ECU map settings and the FMF Exhaust in an upcoming issue of Motocross Action magazine, but for the quick answer on how they performed — I liked them, a lot! The best way to test, is to go back to back with the two settings your trying and have as little time off the bike in between each ride as possible. The ECU is basically the brain of the modern day four-stroke bikes. This Vortex ECU has a lot more room for adjustment when compared with the stock ECU that comes on the KX250. Jamie used this computer and his laptop to make adjustments to the bike in between his sessions. He even spun a few laps to feel it out for himself. During the testing, a water line broke on the track. But we didn’t have time to go around it, we had work to do! Luckily I knew if I got my front wheel over the puddle, I wouldn’t get my new Leatt gear or bike too dirty.

IN THE MXA STUDIO | THE CALM BEFORE THE STORM We finally got the 2020 KTM 250SX in the MXA studio. They aren’t many big changes for the 2020 year other than suspension settings. At the same time KTM’s sister company Husqvarna gave us their 2020 TC250 which is basically the KTM 250SX. We haven’t had one of these in the studio before. This pit bike is called a YCF Bigy Factory 190 ZE MX. YCF has a complete line of pit bikes. Check out the link www.ycfusa.com The Gaerne Fastback Endurance boots come in at Gaerne’s mid-level price point, without sacrificing comfort and support. The fastback’s wrap-around ankle pivot system contributes to the boots increased stability and more supported movement. The rubber inner grip guards at the ankle increase your ability to grip the motorcycle. The leather thermal shield allows for a closer fit against the bike with easy-in/easy-out adjustable alloy buckle system grants more space around the calves when needed to accommodate knee braces or larger calves. With Gaerne’s trademark dual-composite anti-shock sole, heavy duty arch support and more, the Fastback boot was designed to give you more bang for your buck. $369.99—www.gaerneusa.com or (661) 257-3386. 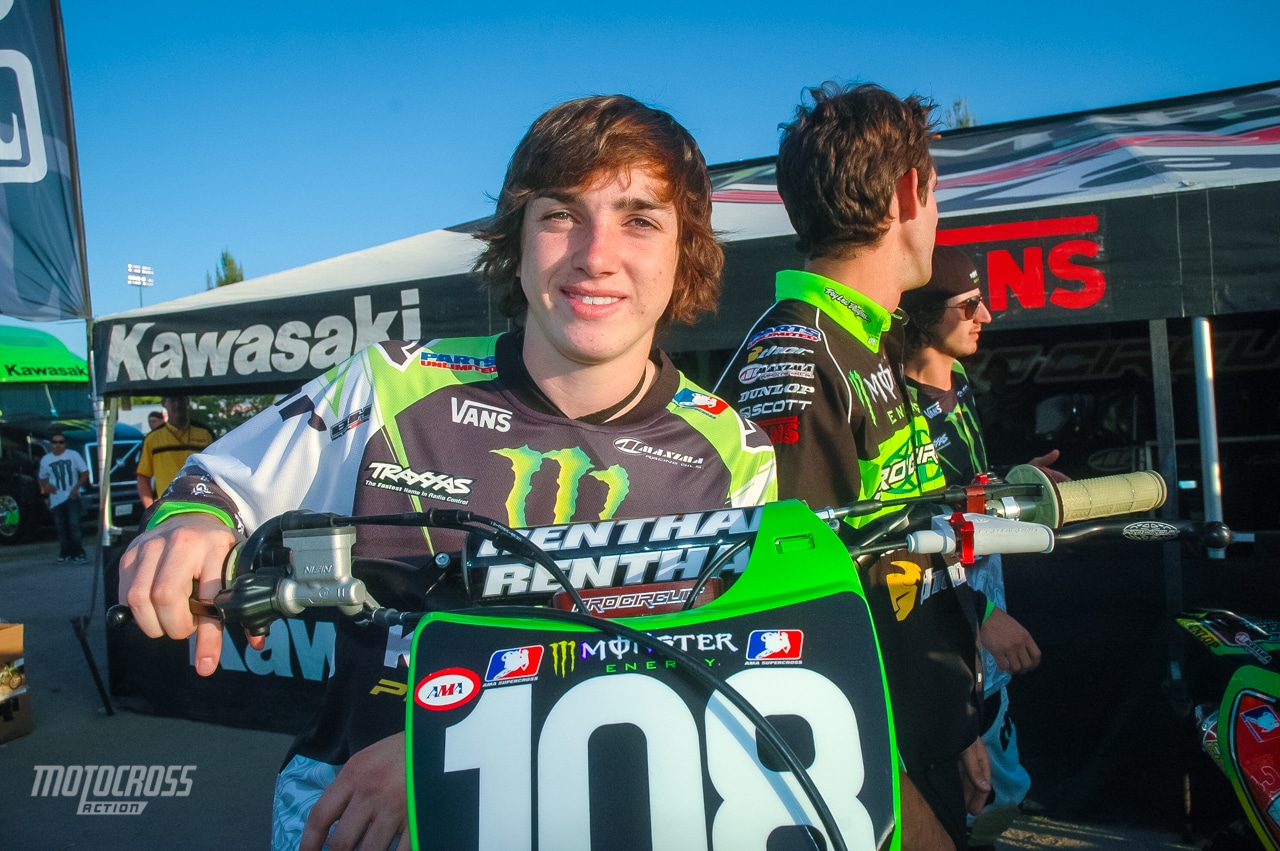 Dean Wilson back in his first year racing pro back in 2010. He had a good rookie year as he placed 6th in the East Coast Supercross series and 4th in 250 Nationals.

Moto Trivia answer: Sean Hamblin back in 2008 aboard a Tuff Powersports YZ450F.