The World Two-Stroke Championship is a race that has a certain amount of prestige among the growing two-stroke community. To win, it takes much more than a box-stock YZ125 or KTM 250SX can deliver. So,  we asked TM USA importer Ralf Schmidt if TM could build us a project TM 144MX that could win the 125cc World Two-Stroke Championship in October. Ralf said, “Get me a fast rider and I’ll give you a fast bike.” TM 144MX isn’t a big bore 125. TM starts from scratch with new cases, a different crank and a completely unique bore and stroke for the TM 144MX.

If you’re thinking a 144cc engine is cheating in a 125cc class, you’re wrong. World Two-Stroke Championship rules allow engine displacements up to 150cc in the 125 classes. After testing the 2020 TM 144MX in stock trim just one month prior, we were impressed with how strong the stock power was and with how well the bike handled. The MXA wrecking crew was already a fan of the TM 144MX, and we were excited to see what TM USA was going to cook up for us. We also liked that we were going to get factory support for this World Two-Stroke project. Bridgestone is making a push back into motocross again, and our TM 144MX was shod with X20 Battlecross tires.

ALL THE STEPS THAT RALF TOOK

Step 1. Unlike KTM and Husky, who only add a bigger piston to their 125 engines to create their 150s, TM starts from scratch with new cases, a different crank and a completely unique bore and stroke for the TM 144MX. Additionally, the 2020 TM 144MX was upgraded from previous years with a new cylinder, piston height and port timing.

As a former Dutch Pro, Ralf likes to give his race bikes a little flavor of Holland. VHM is also from Holland, and the VHM guys worked with Ralf on MXA’s TM 144MX project bike to develop new cylinder head inserts to match the hopped-up engine.

Step 2. Amazingly, you can custom-order your TM through Ralf and/or TM Italy. This allows a racer to pick and choose the upgrades he’d like on his new Italian bike—installed by the same mechanics who build the TM Grand Prix bikes. As for our TM 144MX project bike, Ralf had TM in Italy port the OEM cylinder to the factory spec. No, it’s not an unobtainable factory part with a unique part number. The factory TM parts all begin as stock parts and then are modified by hand from there.

Step 3. TM USA spent many hours testing pistons for our project 144MX before settling on an OEM piston, modified by VHM. VHM changed the squish angle on the piston’s dome to perfectly match the 12-degree angle of its custom-made combustion chamber insert. The VHM inserts for the cylinder head come in a range of volumes from 11.2cc to 11.4cc and 11.6cc. After trying all of them, TM USA found that the stock piston with the 11.2cc VHM insert added 3 horsepower. When they switched the stock piston for the VHM-modified piston, the bike gained a total of 4.2 horsepower. Step 4. TM USA has its own test track out behind its warehouse in the hills of Banning, California. On this track, they tested a multitude of pipes and silencers. The end result was that TM USA ended up with the OEM pipe and a Pro Circuit 304 silencer. This is not an uncommon match-up. Many KTM 250SX racers swear by the stock pipe with the 304 silencer. For fuel, Ralf mixed 2 gallons of VP C12 with 3 gallons of 91-octane pump gas (with Bardahl two-stroke oil at a 30:1 ratio.)

Step 5. TM USA had the fork tubes and shock shaft titanium-nitride-coated a vibrant blue color before they handed the components over to Lainer Suspension. Lainer kept the stock spring rates and added its own valving. Lainer also added its rebound stopper to the TM 144MX. The stopper is a 1-inch rubber bumper that mounts under the swingarm and cushions the shock to a stop under full compression. It seems a little odd, but Tony Cairoli ran one when he won the 250 World Championship.

The main objectives were to produce max power and develop suspension settings that worked in harmony with the overall package. With increased speed comes the need for improved stopping power. In stock trim, TMs already have the same great Brembo brakes as KTMs, but TM uses a larger 270mm front rotor. Ralf upgraded the stock brake lines by switching them out for Galfer steel-braided lines. Steel-braided lines eliminate hose expansion and prevent the spongy feel at the lever. To work together with the Brembo brakes and Galfer brake lines, Ralf chose a 270mm Galfer Tsunami front rotor and ARC levers. Ralf swears by the ARC levers. He also drilled a hole in the rear brake-caliper guard to help dissipate heat.

What else did the TM mastermind add onto our project TM 144MX? SAM Racing Parts, a new CNC company from Italy, provided the rear brake-caliper holder and shark-fin rear-brake rotor guard. The rear-brake caliper holder is a plus when changing the rear wheel because the caliper also doubles as the axle block, keeping your axle in its original spot. Ralf also used SAM Racing footpegs. WAS ALL OF RALF’S WORK WORTH IT?

Enough about what Ralf did. Was it all worth it? We assigned two Pro-level MXA test riders to shake down the TM 144MX project bike. One of them fit the small-bore, 144cc two-stroke perfectly at 5-feet, 6-inches tall and only 130 pounds, while the other was 6 inches taller and 35 pounds heavier.

Our first impression was a positive one, as the bike sounded terrific. We had the entire Glen Helen facility to ourselves for the first of multiple test days at different tracks, including TM’s test track, and the crisp-sounding TM exhaust echoed throughout the park. We’ve heard a lot of great two-strokes in our time, but this one had everybody reminiscing about the good old days of factory two-strokes every time the sweet-sounding TM two-stroke rocketed by the assembled crowd of test riders and mechanics.

With the stock jetting and 13/52 gearing, the MXA test riders were blown away by the sheer power the bike had on the straightaways. It pulled exceptionally hard, and our testers almost forgot it was a small-bore bike until they got to the hills. It’s not that it wouldn’t climb the hills, because it did‚ it just required extra effort in the shifting and clutch-feathering departments to get it into the rpm where it sang its best song. The power was potent, and the hit was hard, but our testers were looking for more bottom-end to get the bike up to speed quicker. 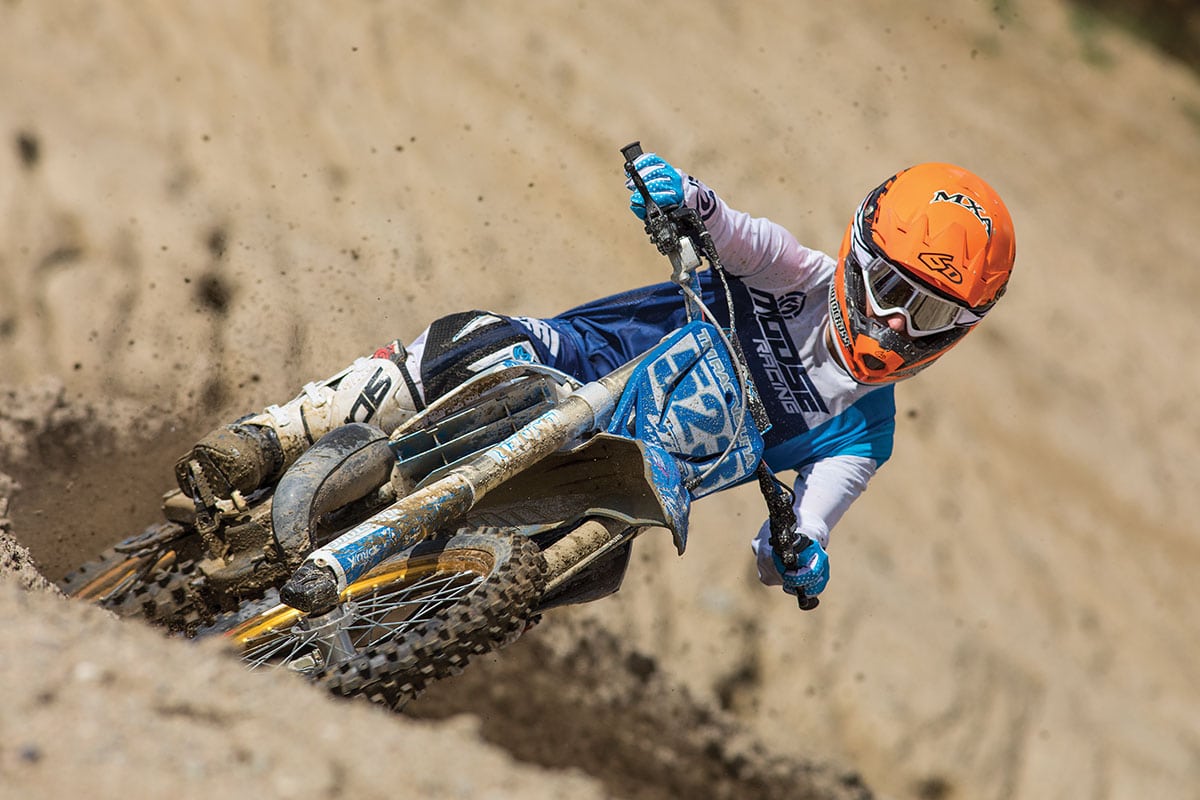 We changed the 188 main jet for a 192 and dropped the pilot from a 50 to a 48, the slide from a 6.5 to a 7, and the needle from a NOZG to a NOZE. Leaning out the pilot gave the bike better initial response at the crack of the throttle, and the richer needle added fuel, while the leaner slide cutaway crispened that mixture.

After these changes we were able to get into the power quicker when coming out of corners. No, the jetting didn’t give our project bike a four-stroke-like powerband; it still took skill to keep the bike in the powerband‚ but it did help. Last, we changed the 13/52 (4.00 ratio) gearing to a lower 12/50 (4.167 ratio) to bring the shift points closer together to improve the bottom-end feel so that our testers could get instant drive out of corners and up the big hills.

When it came to the Lainer suspension, the MXA test riders felt that Lainer had misunderstood the project and added Supercross suspension on the TM 144MX. But, Ralf was confident that the initial stiff feeling would go away once the suspension broke in. He was right. After the first hour, the suspension broke in and our test riders’ opinions quickly changed. The stock spring rate was still too stiff for our lighter test rider, but it worked perfectly with the Lainer valving for our 165-pound rider. With the sag at 100mm, the only adjustments he made were to the compression on the forks. And after he heckled Ralf about how stiff it was pre-break-in, our tester was slightly embarrassed to ask for three clicks stiffer, but it worked. The suspension held up well at the bottom of Mount Saint Helens as the riders smashed through braking bumps into the newly configured sweeping left-hander. After inspiring confidence in the most robust section of the track, the suspension won over our test riders.

As we found out one month ago when we tested the stock 2020 TM 144MX, it was already a great bike in its original trim. But, the modified version offered 4 more horsepower with better brakes, suspension that held up higher and an overall package that was literally custom-made for the MXA wrecking crew.

If you like two-strokes that stand out from the crowd, the TM 144MX will surely provide you with a good time. In stock form, the 144cc goes for $8595. On our project bike, we added $6379 in parts to turn the stock bike into a bike that is capable of winning the 125cc Pro class at the 2020 World Two-Stroke Nationals—if the rider is ready, willing and able. THIS WEEK AT GLEN HELEN: THE 10-HOURS OF GLEN HELEN STARTS SATURDAY AND ENDS SUNDAY