When we came close to finishing the test cycle on our 2020 KTM 250SX two-stroke, I realized there was a void in the lives of the MXA wrecking crew. Once you get into the two-stroke groove, you go into serious withdrawals when you don’t have another one locked and loaded. I had been working on both the 2020 YZ125 and KTM 250SX tests in this time frame and had the desire to build the ultimate KTM 250SX two-stroke, which, to me, meant turning it into a KTM 300SX. But, with our magazine deadline approaching, we were about to draw straws for which of us would have to take on all the legwork of building something labeled as the “Ultimate Bike.” All four of us were already up to our necks in work, with Daryl Ecklund busy on the TM sidecar-cross project, Josh Mosiman spending all of his waking hours with Carson Brown’s FC250 test, and Dennis Stapleton jetting off to the Middle East to race. We thought about delaying the ultimate KTM project for a month, but then former AMA Pro and Hollywood stuntman Will Harper, along with local SoCal Vet racer Kent Reed, said that they would build the KTM 300SX for us and shepherd it all the way up to the actual testing portion of the project. This price tag to build a full-race 2020 KTM 300SX will scare you away from the project. The suspension components alone were $8655.

I gave them the leeway to run with the project, and told them to make all the decisions themselves and deliver the bike to us when it was finished. Under no circumstances could they ride the bike until all of the studio shots, action photography, videos, test sessions and races were done. Will and Kent used an eclectic mix of products, technology and specialists to get to the finish line on time. KTM’s 300 kit engine up the horses and torque, it’s up to you on how much farther you want to push the power.

For the engine, Will and Kent chose Dicks Racing in Washington, Utah, to work on the KTM Power Parts 300cc upgrade kit. Dick Wilk was the perfect choice. He has been a KTM specialist for decades, and the MXA wrecking crew has ridden several of his 300cc engines in the past, including fuel-injected models. Once in Utah, the Power Parts cylinder head was milled to increase the compression, and Dick added his proprietary Torque Grooves in a ring around the squish band to improve combustion efficiency. 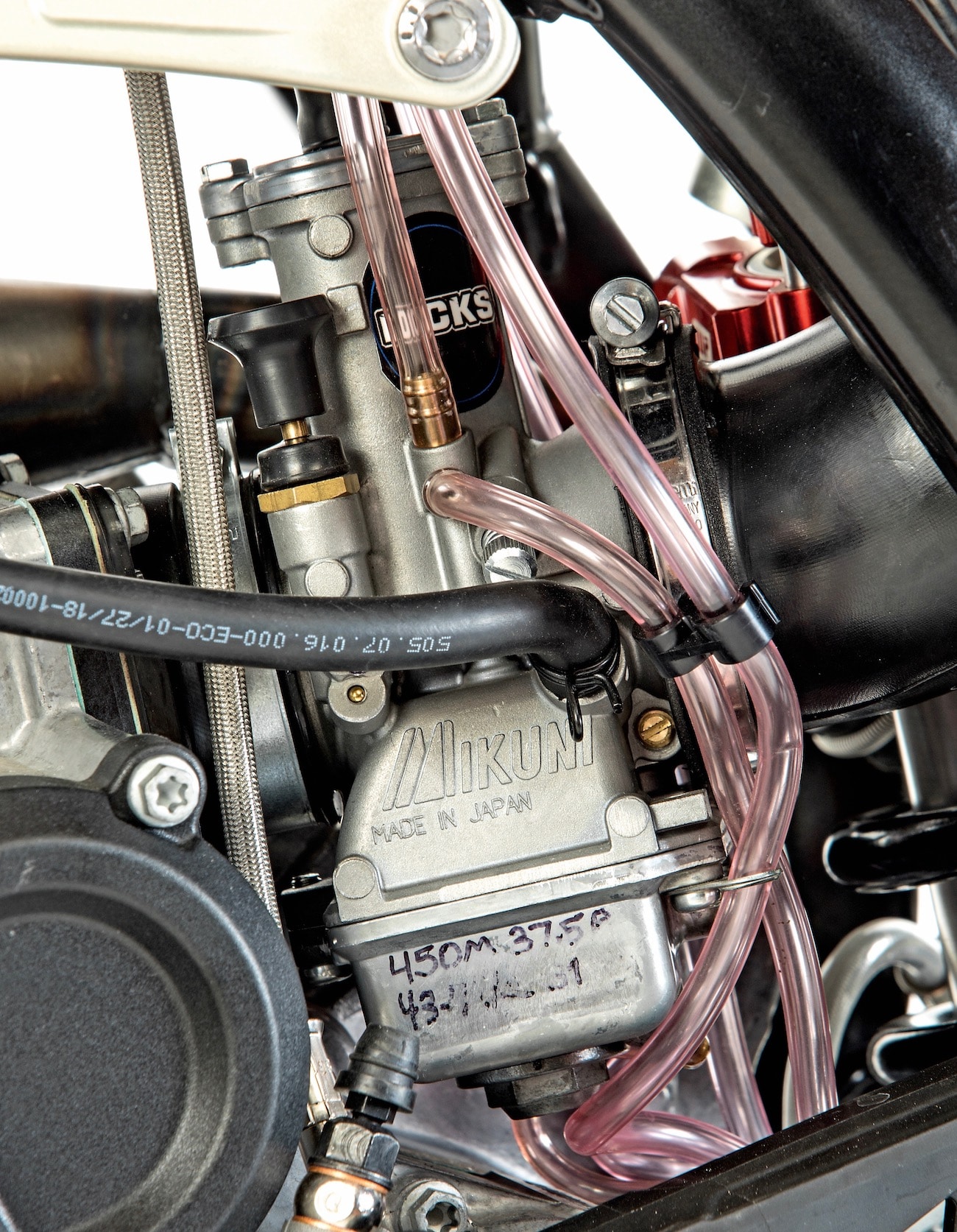 The carb had the float bowl modified, the jetting tweaked, Quad Flow Power Wing added and the venturi taper-bored from 38mm to 42mm.

For the fuel system, Dick installed a Thunder Product’s Quad Flow torque wing in the carb, which had been taper-bored from 38mm to 42mm. Plus, Dick added some secret touches to the carb, slide and float bowl while he was in there. Dick Wilk of Dicks Racing did the cylinder, head and carb mods.

For an expansion chamber and silencer, MXA’s caretakers chose an Italian-made Scalvini cone pipe and Pro Circuit silencer for improved top-end power. Power was not going to be a problem, because there is no replacement for displacement. The final bill for the engine mods—300 kit, head milling, carburetor, pipe and muffler—was $2200. I knew what was coming in the suspension department, because both Will Harper and Kent Reed race on WP Cone Valve-equipped KTMs, but even they surprised me in their pursuit of the ultimate suspension setup. They ordered brand-new WP cone-valve Pro Series spring forks and shock, then sent them to AEO Powersports KTM in Temecula, California, where former WP suspension tech Mark Johnson re-valved the units, replaced the chrome cone-valve fork legs with $810 coated fork legs, and added a $450 REP Suspension shock linkage to the rear end. With the addition of KTM Power Parts split triple clamps and Xtrig PHDS bar mounts, the suspension was done. Hold on to your hat, because the suspension mods cost $8655.

THE POWER ADVANTAGE DIDN’T COME ACROSS AS BRUTISH, BUT INSTEAD FELT MORE MANAGEABLE, EASIER TO KEEP HOOKED UP AND BLESSED
WITH MORE TOP, MORE PEAK AND MORE OVER-REV. Once the engine and suspension were done, there was very little left to do to button up the project. KTM Power Parts orange-anodized Factory wheels were installed, along with an orange rear sprocket. Hoosier IMX25s tires were the sneakers of choice. Decal Works supplied the graphics for our KTM 300SX. They used the same Hot Wheels design that was used on Cooper Webb’s KTM 300SX that we tested a couple of months ago that is available to the public. Running a Pro Circuit muffler, even with the stock exhaust is a standard-issue KTM mod, we mated it to a Scalvini pipe.

Even after our ultimate KTM 300SX was shot in the studio, Will and Kent kept showing up at our door with more parts, including a KTM Factory Edition seat, KTM front brake rotor cover, anodized shift lever, holeshot device, Hinson Billetproof clutch cover, orange-anodized engine covers, LightSpeed carbon fiber factory chain guide and all manner of widgets. We told them to stop, because once the studio photographs were shot, we weren’t adding any more foof. They didn’t listen.

The final question was, “How did it perform on the racetrack?” To tell the truth, it was awesome. Of course we knew it would be, because literally everything done to the KTM 250SX to make it into the ultimate KTM 300SX came right out of the well-established KTM playbook. The Dicks Racing engine mods had been proven to us many times before. The cone-valve forks have a stellar reputation. 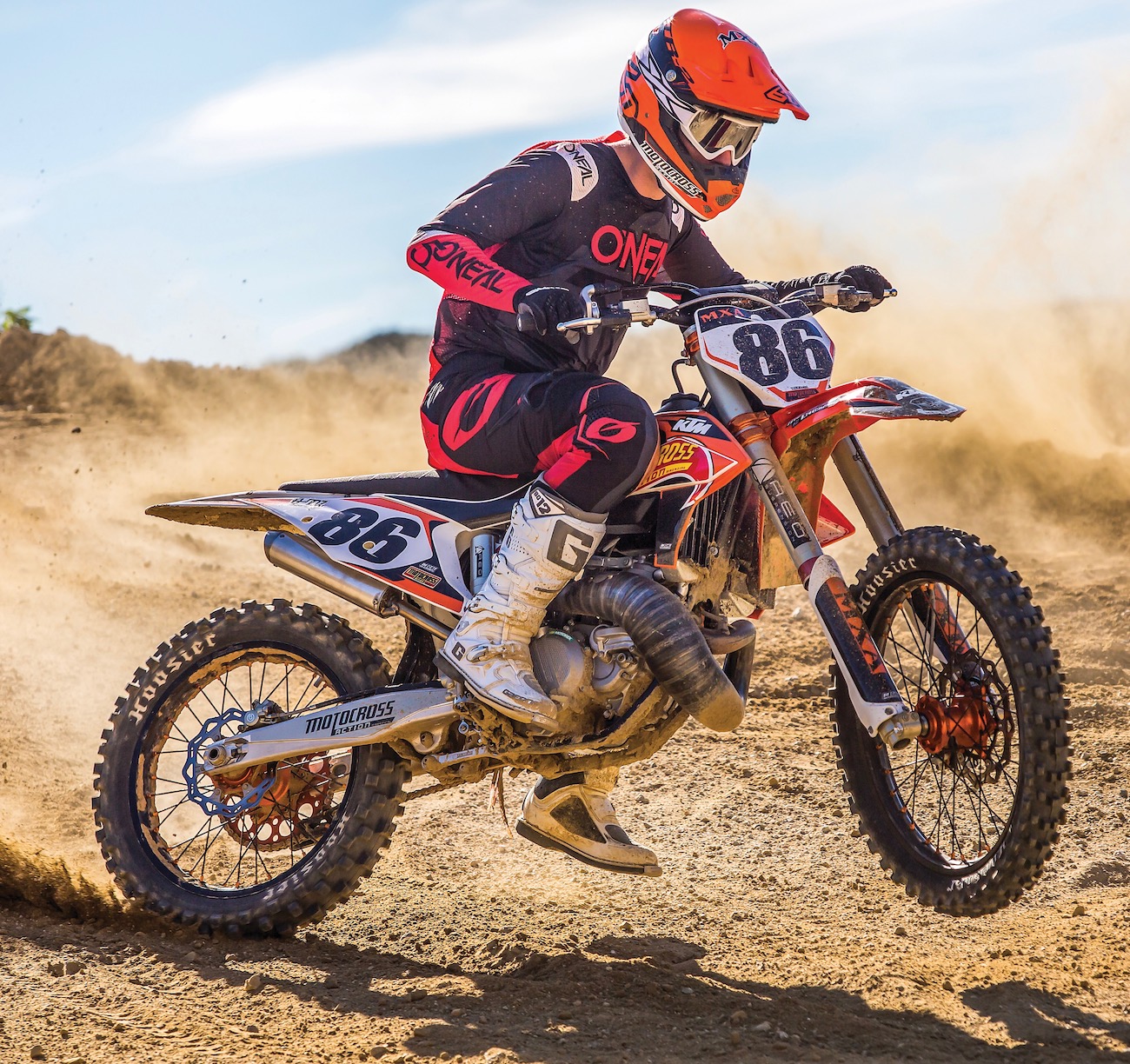 Did Will and Kent make choices that I wouldn’t have made? Yes, but I abdicated the power to them. The end product handled great, absorbed everything we threw at it—both big and small—and produced an incredibly smooth powerband that didn’t have any of the scary-fast throttle-response issues of the stock KTM 250SX. It was a sweeter version of a KTM two-stroke. 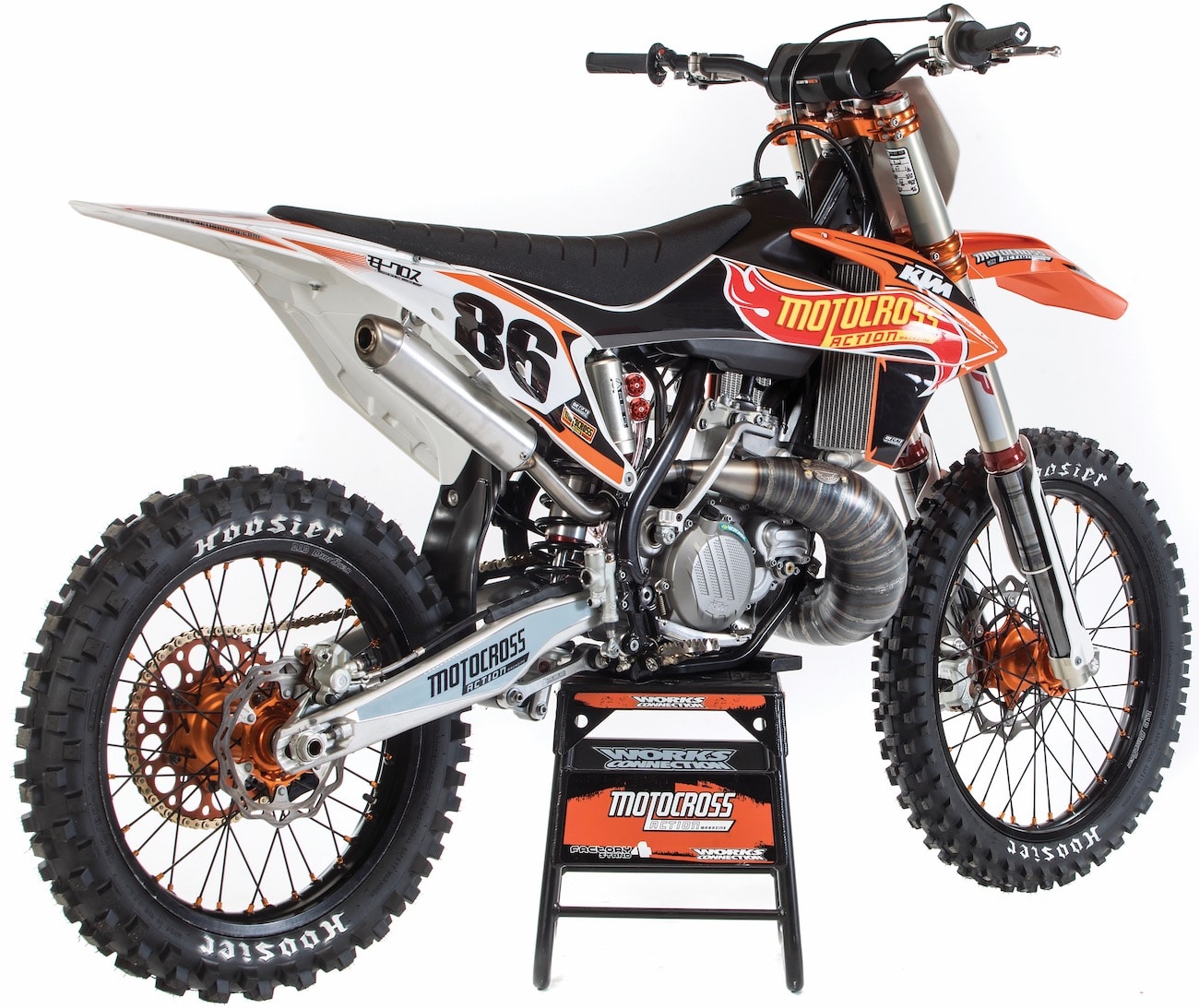 The view from the business end of MXA’s KTM 300SX. As you can tell from the dyno chart below the 300SX is much more powerful than the 250SX, but a lot easier to use. After 95 the stock 250SX falls off the pipe. On the track, that power advantage didn’t come across as brutish; instead, it felt more manageable, easier to keep hooked up and blessed with more top, more peak and more over-rev. All in all, the 300SX powerplant was a plus on all accounts. Best of all, not a single part on our bike was unobtainable. Most came from the KTM Power Parts catalog or well-known KTM affiliates.