The start of an MXGP moto in Asia.

For the 13th round of the MXGP series it was KTM rider Jeffrey Herlings that won both motos. They were both close races. Tim Gajser kept him honest in moto one and Clement Desalle did the same in moto two. Antonio Cairoli looked as if he was riding with an injury to the left hand. This hindered his performance in Asia. Even though Herlings missed the Italy round in Lomardia he never lost the points lead and has a 24 point gap from Cairoli heading into round 14 of the series.

MXGP WORLD CHAMPIONSHIP CLASSIFICATION (ROUND 13 OF 20) Jeffrey Herlings won both motos in Asia and extended his points lead. Tim Gajser got on the podium again. The competitors in the 2018 MXGP World Championship are as tough as nails or in Red Bull KTM Factory Racing’s Jeffrey Herlings case tough as the plate and screws of his recently fractured collar bone. Herlings came into the Indonesian trip unsure of his situation but by the end has come away with 97 championship points of the 100 available.

The opening lap action continued with Team HRC’s Tim Gajser making his way to third and second in front of Herlings briefly. Wilvo Yamaha Official MXGP’s Jeremy Seewer and Monster Energy Kawasaki Racing Team’s Julien Lieber collided on the uphill triple which sent Seewer tumbling, neither rider was injured but Seewer did not rejoin the race.

Herlings struggled to keep momentum at the start of the race and was passed by both Gajser and Paulin on lap 2 with Monster Energy Yamaha Factory MXGP’s Romain Febvre closing in as well. Cairoli’s lead was then taken by Gajser and Febvre was past Herlings who was immediately under pressure from Desalle.

Febvre and his fellow frenchman, Paulin, kicked off a battle for third swapping positions all in front of Herlings. Herlings took advantage of the battle and was into 4th past Paulin. Desalle then banged bars with Paulin eventually finding a way by the Frenchman.

Herlings made a move around the outside of Febvre and was then past Cairoli in the same lap. From that point Herlings gained time on Gajser and made a pass lap 13 just before Febvre crashed out of 4th. At the finish Herlings took the win with Gajser 2nd and Cairoli 3rd.

Race 2 was started with a second Fox Holeshot from Cairoli with Herlings, Desalle, and Seewer alongside. Febvre was back for Race 2 but fell on the start and had to fight back from dead last. Cairoli’s good start was short lived when he dropped 5 position in the first 3 turns back to 6th. Desalle was in the lead next but Herlings took it away in before the first lap was complete.

Cairoli lost more positions early in the race to Lieber and TM Factory Racing’s Max Nagl. Back at the front Desalle was charging to insides of Herlings and showing the red plate holder a wheel as Paulin crashed while under pressure from Lieber.

Seewer was also riding well and up in 4th while Cairoli made a pair of passes to take back fifth from Nagl and Lieber. On lap 13 Seewer would also lose his position to Cairoli whose forward progress wouldn’t be enough to catch Gajser in 3rd.

At the finish Herlings took his 2nd race win of the day with Desalle 2nd, Gajser 3rd, Cairoli 4th, and Seewer 5th. In the overall result Herlings took the clear win with 1-1, Gajser took 2nd with 2-3, and Desalle returned to the podium for the first time since winning the MXGP of Russia with 4-2 for 3rd.

Jeffrey Herlings: “To go home with 97 points from the 2 weekends is absolutely amazing, I didn’t expect that and it has been like a dream come true. Not only didn’t I lose any points but I actually gained some, not many but a few is good so I don’t want to take this for granted. The rest of the guys rode awesome I really had to fight in the first race with Tim and the second with Clement.”

Tim Gajser: “I was feeling good coming here, the track it was just amazing. I was pushing hard to pass Clement in race 2 but had to settle for 3rd to take 2nd overall, it was a good weekend.”

Clement Desalle: “It is good to be back on the podium. It has been a long time since I have been on the podium. I had good races today with two consistent races and two good starts which were really important.” The 13th round of the MXGP World Championships is held in Indonesia for the second weekend in a row. The race is, however, located at a different track in than last weekend. This weekend they are calling it the Asia MXGP. In the MXGP class in Saturday qualifying there were only 23 riders that lined the 40 man gate. On the same weekend at the Red Bud National in the 450 class 87 pro riders signed up to race.

In the MXGP qualifying race it was Factory KTM’s Jeffrey Herlings that took the win. He is riding amazing for  breaking his collarbone less than a month ago. Honda’s Tim Gajser placed second and Jeremy Seewer rounded off the podium. 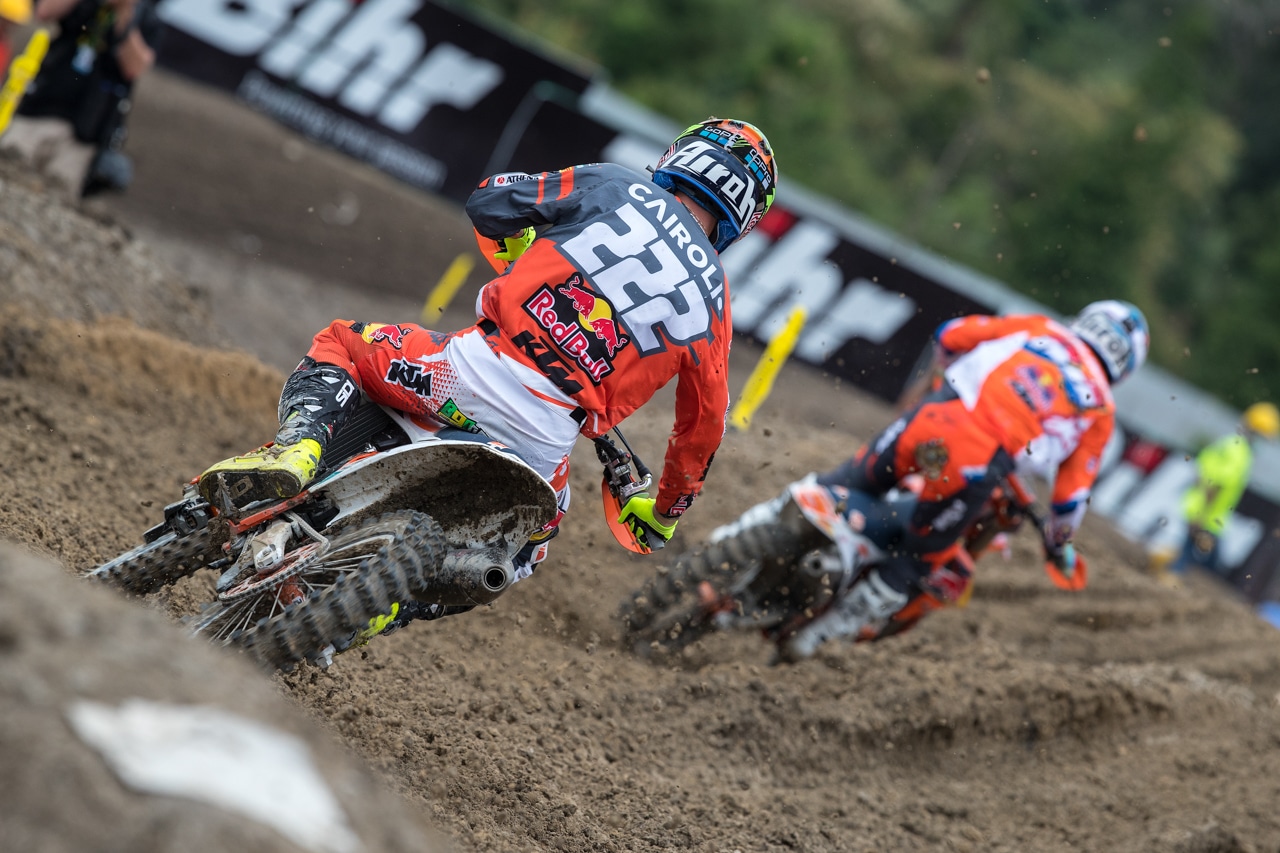 MXGP’s Qualifying race was led off of the start by Red Bull KTM Factory Racing’s Jeffrey Herlingsafter he lined up third from the inside gate. Lining up to his inside on the long left hand start was the only two riders faster in Time Practice, Monster Energy Yamaha Factory MXGP’s Romain Febvre and Team HRC’s Tim Gajser.

While Herlings led he came under pressure from Gajser who charged early in the race to battle for the win. Gajser showed Herlings a wheel on many occasions but Herlings responded every time. As Gajser tried to match the pace of Herlings for the lead Febvre was urgently looking to pass Seewer for third. The pressure from Febvre increased as Herlings and Gajser pulled a slight gap on the pair of Yamaha’s but to no success. Seewer responded to the charge of Febvre by catching Gajser.

Cairoli meanwhile had fought his way back into 6th after briefly being passed by Monster Energy Kawasaki Racing Team’s Clement Desalle. The lead four had separated themselves from the rest of the field early and Cairoli was left fighting for 5th with Paulin. On lap 10 of 12 Paulin’s fight for the spot was lost when he fell on the entry to a corner. The mistake from the #21 allowed both Cairoli and Desalle to move forward a position. At the finish Herlings topped Gajser by over 4 seconds with Seewer 3rd, Febvre 4th, and Cairoli 5th.

BOS GP’s Evgeny Bobryshev and Monster Energy Kawasaki Racing Team’s Julien Lieber both crashed separately during the race but Bobryshev was unable to rejoin the race while Lieber got back up in 13th. Leiber eventually finished 21st however after being penalized along with Bike It DRT Kawasaki’s Tommy Searle in 22nd and Standing Construct KTM’s Kevin Strijbos in 23rd. Also notable was the absence of the 2017 MXGP of Indonesia winner, Wilvo Yamaha Official MXGP’s Shaun Simpson.

Jeffrey Herlings: “I am feeling better every day I am riding. It was a good day, qualifying first I think the inside gate will be best even though today I started from gate three. We will see how it goes tomorrow, I think the start will be really important but I think the track is absolutely awesome.”

Red Bull KTM Factory Racing’s Glenn Coldenhoff took 11th and later said: “Today I didn’t have a good start, I didn’t do well in Time Practice so I was very far outside on the gate. Overall though my feeling is good here, it is a beautiful track.”