KTM Press Release: The 2023 KTM 450SXF Factory Edition is a fully optimized and race-ready sculpture of the current KTM 450 SXF that created a fresh standard in the industry for handling, power, engineering and competitiveness upon its presentation during the summer of 2022. The SOHC four-stroke engine weighs less than 27 kg. The engine oozes usable torque from every square centimeter and is harnessed through launch control, a Quickshifter, two maps, a redesigned airbox, exhaust system and a series of other modifications befitting a motorcycle expected to fight for title success. The altered ergonomics have improved the rider ‘triangle’ for tight centralization and enhanced feeling. The innovative ‘anti-squat’ concept of the frame and chassis (with reinforced aluminum subframe) compliments the revised engine position for increased centralization. The whole bike is augmented with cutting-edge hardware from WP Suspension and the forks and rear shock can be adjusted easier than ever thanks to the tool-free configuration. The suspension benefits from refined settings, which have been mined from all the R&D work and data sourced from Motorsports. The new generation of KTM SXFs blasted out of gates and straight into contention during 2022. Cooper Webb and Marvin Musquin were both searching for AMA 450SX podiums and victories while the KTM 250 SXF saw the quarter-liter incarnation immediately racking Grand Prix wins and ultimately the 2022 MX2 world title with Tom Vialle; who now takes the bike into AMA 250SX Supercross for ’23. For the 2023 KTM 450SXF Factory Edition, KTM has applied a litany of KTM PowerParts to boost the function, the aesthetics and the exclusivity of the model. The bike is immediately distinctive due to the orange frame and Red Bull KTM Factory Racing graphics set. These details define the KTM 450 SXF Factory Edition on any track or trail. Elsewhere the orange factory racing seat, wheels, triple clamp, carbon skid plate, carbon front brake disc and guard come with an Akrapovič slip-on exhaust kit, Hinson clutch cover, WP start device and ODI lock on grip set among other additions.

Red Bull KTM Factory Racing will soon roll into action. The stadium lights will flick on and illuminate the 2023 AMA Supercross season from January 7 at the Angel Stadium, Anaheim in California, before visiting 12 states for 17 rounds and then wading into the three-race spectacle that is the inaugural SuperMotocross contest in October. Those riding and racing the 2023 KTM 450SXF Factory Edition might not reach the speed or skill of Musquin, Webb, Aaron Plessinger or Vialle but they can look the part and reach the nearest performance specs to nudge nearer to the dream. 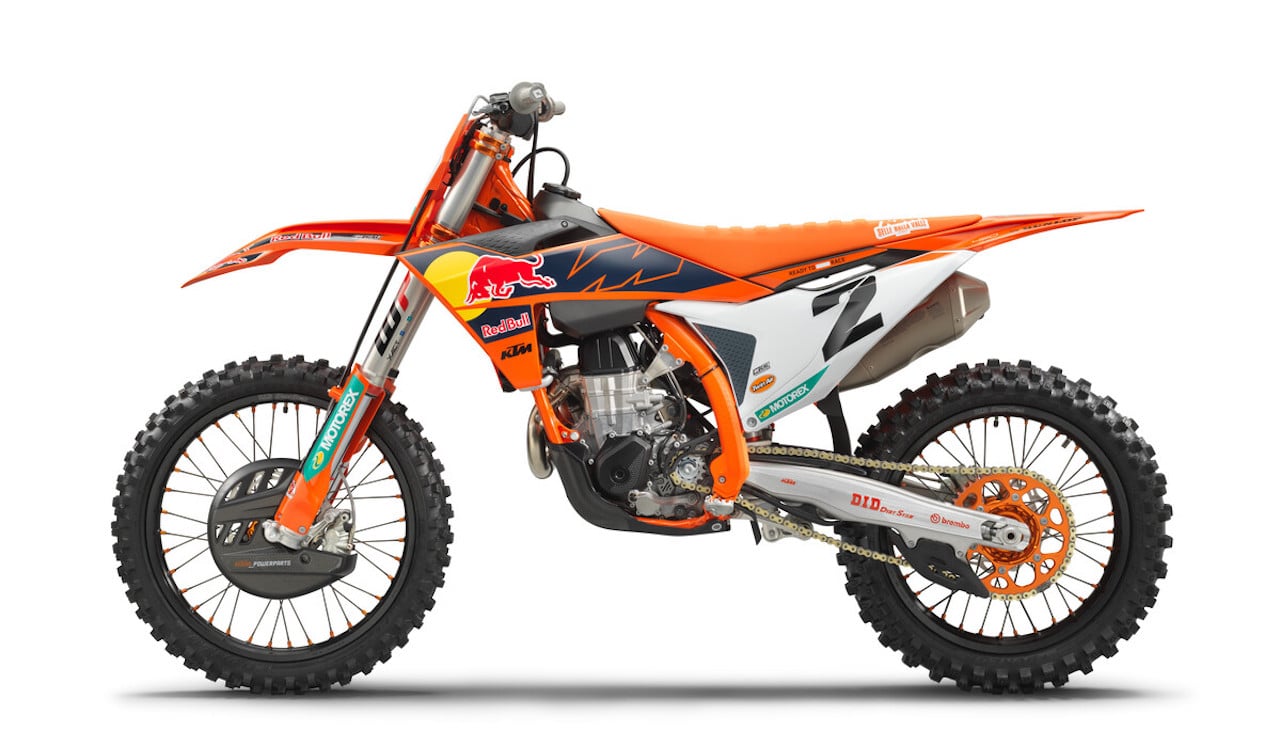 The 2023 KTM 450SXF Factory Edition will be produced in limited numbers and with worldwide distribution. Enquiries and pre-orders can be made at any Authorized KTM dealer, with shipment expected for December 2022.

For any additional information visit ktm.com.