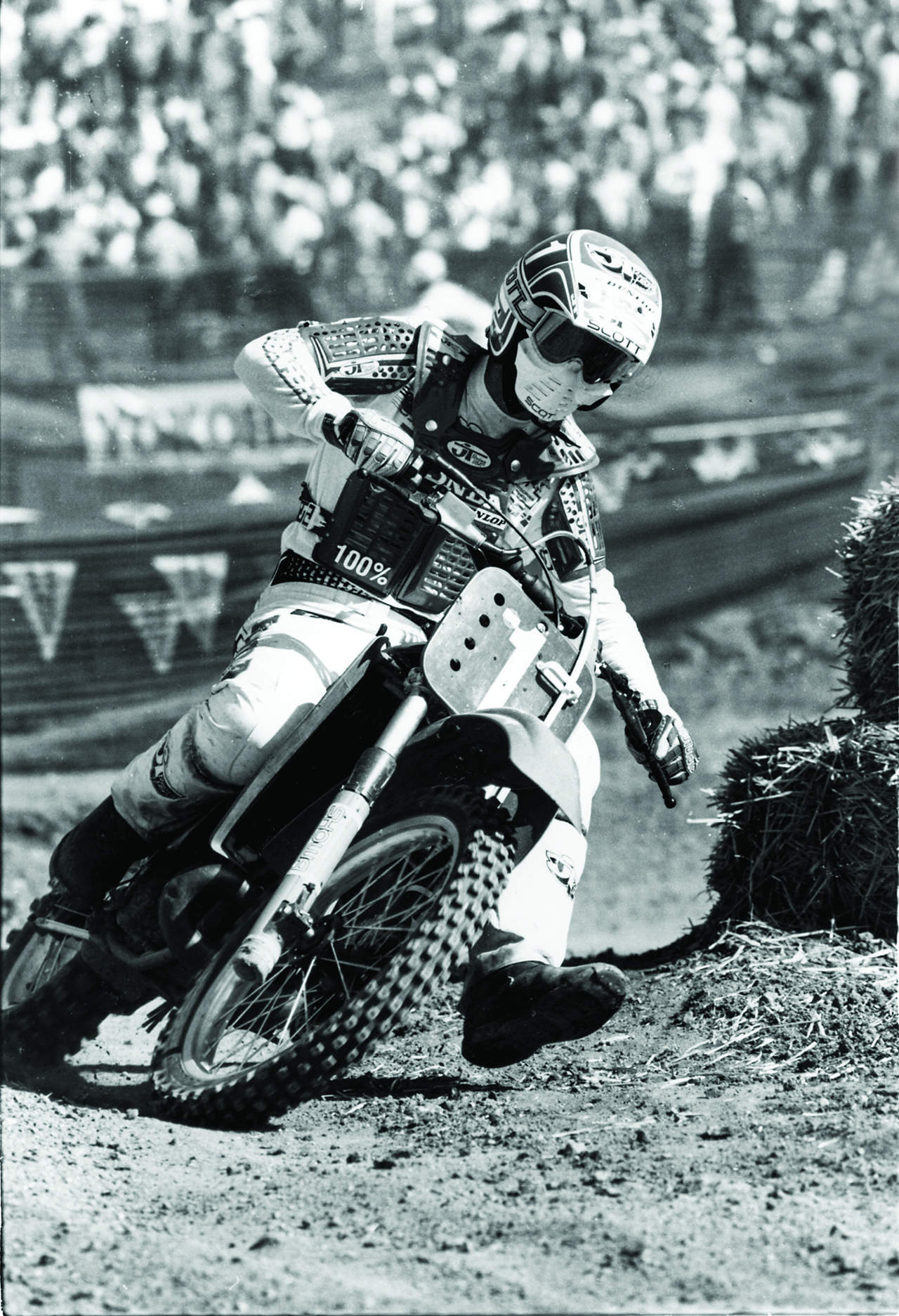 “The photo on this page was taken at Hangtown in 1985, which was the second 500 National that year. I was coming off my 500 title the year before, and the ’84 RC500 was one of my favorite bikes I ever rode. It was super fast and handled great. Whatever I wanted to do on that bike, it would do—no problem. The only issue I had was that the pipe burned my leg really badly. So, in 1985, Honda tucked everything in really nice and made one of the radiators shorter. Honda tried to style it up a little bit. I thought the bike would be even better than my ’84, but it wasn’t.

I got the holeshot in the first moto at Hangtown. They always reconfigured the section after the start. We came into a right-hander, made a tight left and went through a series of eight jumps. You could double through them, but it was really tight. I got the start, made the right and went wide, screwed up the left, and couldn’t jump the first double. I ended up rolling every jump, which was painfully slow. The whole pack was stuck behind me [laughter]. Broc Glover was right behind me, and then we went into the next left off the throttle. I heard him say, sarcastically, “That was real good.” For him to have that comedic delivery and me to think it at the same time was hilarious. He went by me and pulled out a huge lead, but I got back by him and won the moto. Broc won the second moto and got the overall. I didn’t win the National, but it was progress. I had a long way to go to make up the points I lost at Gainesville, but I was still in the championship hunt.

I CAME INTO THE 1985 NATIONALS HAVING NOT DONE ENOUGH TESTING, AND I WAS COMPLACENT. I FIGURED I WAS GOING TO WIN THE TITLE AGAIN. BROC, ON THE OTHER HAND, WAS READY TO RACE. YAMAHA HAD DONE WORK TO HIS AIR-COOLED YZ490.

You’ll notice in the photo that I’m wearing boot gaiters. I had broken my feet and twisted my ankles a bunch of times throughout my career in JT Racing boots. They looked great and were comfortable, but I had bigger feet and caught them on the ground a lot. Boots back then weren’t like they are now. I switched and wore Hi-Point hybrid Alpinestars, and [JT Racing owner] John Gregory wasn’t stoked on that. I had to remove the front metal plate, and the boots were plain. I was bummed about the look of those boots, so I put gaiters over the boots. It made John Gregory a little happier. I felt like I was encroaching on Johnny O’Mara’s deal, because boot gaiters were his thing, but I had to cover up the Hi-Point boots. After Hangtown I went on a winning streak. In Las Vegas it was a gazillion degrees out, and I won both motos. I was good in the sand and heat. Then we went to High Point. Broc had me for the overall, but he wadded it up badly right behind the starting line on a downhill double before the uphill triple. I could see how badly his bars were bent clear across the track. I think he even pulled into the pits to have Jon R [Glover’s mechanic, Jon Rosenthal] bend the bars back. Anyway, he finished second in the moto and second overall on the day. After High Point was Six Flags in Atlanta, Georgia, and I won both motos there. I had closed up the points gap a bit, but then came Lakewood, Colorado, which was a disaster.

I came into the 1985 Nationals having not done enough testing, and I was complacent. I figured I was going to win the title again. Broc, on the other hand, was ready to race. Yamaha had done work to his air-cooled YZ490. It might not have looked or sounded as trick as my Honda, but it seemed to work pretty well. He was super motivated too. The tables had turned. Still, at Hangtown I got things going, and then I won six motos in a row. I was only down by 10 points heading into Colorado. I got a flat tire early in the second moto after Broc beat me in the first. That’s when I thought to myself, “There goes the title.”

ASK THE MXPERTS: THE PERFORMANCE EFFECTS OF EXHAUST PIPE BENDS