Jon Ortner went 1-2 to win the Over-50 Elite class after both Jon and Luther French were knocked down when a lapper crashed in front of them. Andy Jefferson avoided the collision and went to to win the moto, but Jon’s 1-2 beat Andy’s 3-1. Photo: Kyoshi Becker (Click on images to enlarge)

You wouldn’t think that many people would want to give up the last Saturday of 2017, especially on New Year’s Eve weekend, to come to Glen Helen and race the last REM Motocross of the year. But, you’d be wrong. REM packed in a healthy number of motocrossers who wanted to burn off some energy before the next night’s festivities. David Cincotta (861) and Dutchman Ralf Schmidt (73) take different lines through this banked corner. Amazingly enough, there was even a higher line that was faster later in the day. Photo: Kyoshi Becker

The large turnout resulted in big gates for the Over-50 Novices, Over-50 Intermediates, Over-60 Experts and Over-60 Intermediates (and a lot of riders for the Adult Minicycle class—which took on epic proportions with Doug Dubach, Ray Hensley, Bob Tocco, Pasha Afshar and Ralf Schmidt all signed up to race the one-off event). With the temperature in the mid 80s and no wind it was a perfect day. The REM track was crowded and, as always, lots of foreign riders came to Glen Helen to race at REM while they were waiting to watch Anaheim 1 this coming Saturday night 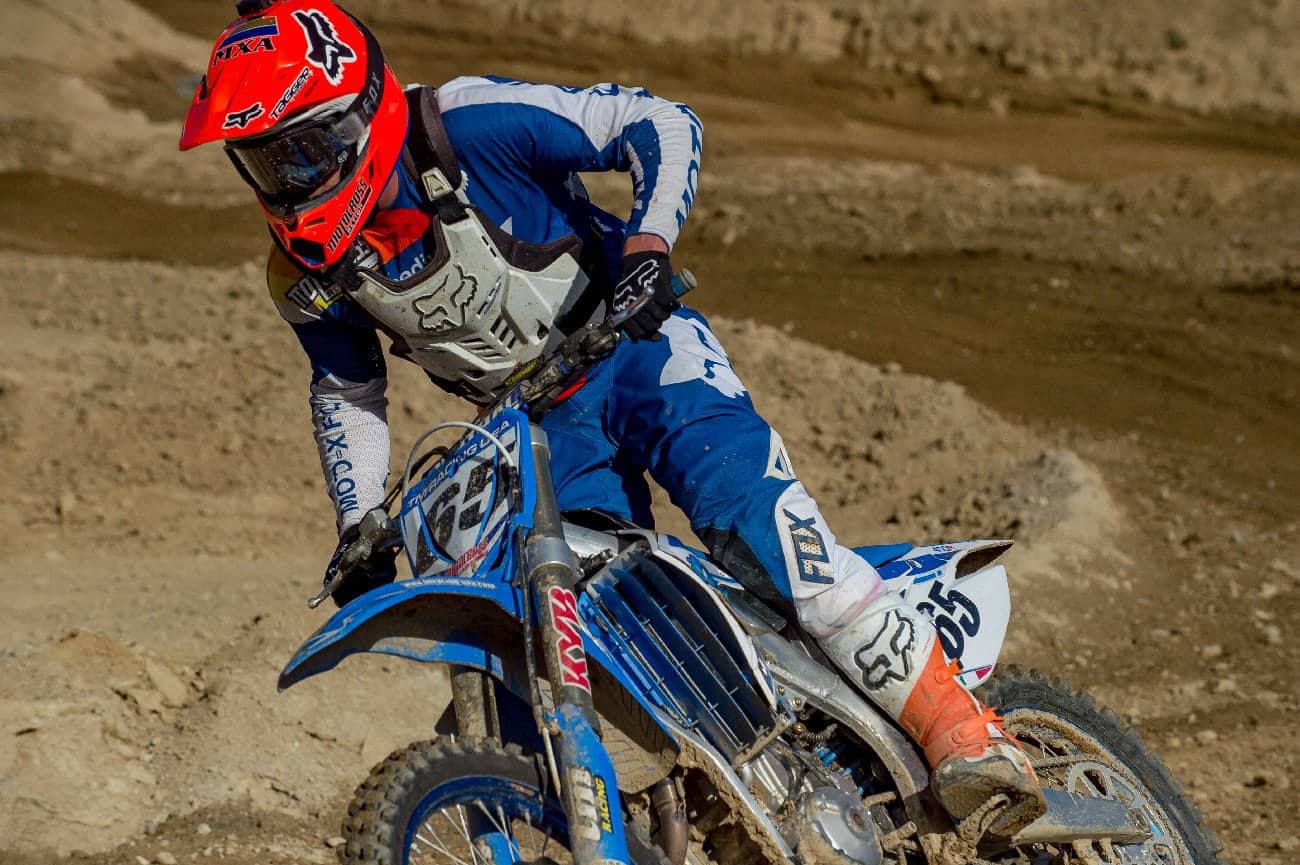 Dennis Stapleton even rode a moto on Over-60 Intermediate Kent Reed’s KTM 450SXF to tell him how the suspension worked. Dennis said it was “too stiff for him and probably too stiff for James Stewart.” Photo: Debbi Tamietti Dave Eropkin (811) was on his way to the overall victory in the second moto of the Over-60 Expert class, but on the last lap he was blocked by lappers and got passed by Jim Latendresse. Photo: Jon Ortner John Caper (67) powers over an REM drop-off on his way to fourth overall in the Over-60 Intermediates with a 4-4 score. Photo: Debbi Tamietti Surprise! Val Tamietti (31) didn’t win the Over-60 Expert class this weekend. Mediocre starts left him chasing in both motos. His 4-3 was his worst score of 2017. Photo: Debbi Tamietti AMG Mercedes auto racer Ernie Becker had his best starts of the year, which he splits between racing sports cars, doing driving schools for AMG and racing the Over-50 Intermediate class. Photo: Dan Alamangos Andy Jefferson raced his Rockstar Edition FC450 to a 3-1 day in the Over-50 Elite class. Andy, who works for Husqvarna, came to REM to babysit the MXA test riders. Photo: Dan Alamangos Josh Fout swept both motos of the 450 Novice class, although he won the first moto on a TM MX450-FI and the second moto on a Husqvarna Rockstar Edition—which for all intents and purposes is the 2019 Husky. Photo: Dan Alamangos Last week Gary Sutherlin (12) signed a contract to race the 2018 offroad races for Suzuki. Gary was on an RM-X450 at REM, instead of the RM-Z450 that every previous Suzuki offroad rider raced. Gary went 3-5 in the 450 Pro class. Photo: Debbi Tamietti Bob Rutten (83) leads Jim Latendresse (564) in the first moto of the Over-60 Expert class. Latendresse would win both motos. Rutten got caught up in someone else’s crash in moto two and finished the day with a 3-7 score. Photo: Debbi Tamietti Kent Reed (491) softened up his forks and changed his shock spring after Dennis Stapleton told him how bad his suspension setting was. Reed went 5-5 in the Over-60 Intermediates. Photo: Kyoshi Becker Carter Dubach (15) moved up to the 250 Intermediate class, but had a rough day as the class was made up mostly of experienced Japanese, Swedish and British riders. Photo: Dan Alamangos Kirk Bassett (V93) takes a moment out from racing to adjust his goggles before getting back on it. Photo: Dan Alamangos Jon Ortner (10) takes a moment to wave a “thank you” to Chris Cole (45), who moved over at the top of the hill to let Jon and Luther French (2) go by. Photo: Rich Stuelke

REM does not race next weekend because of Anaheim 1, but is scheduled to return on Saturday, January 13th, 20th, 27th and February 3rd. For more info go to www.remsatmx.com

CLASSIC MOTOCROSS PHOTOS: WHEN MEN WERE MEN & BIKES WERE MAN-KILLERS