Justin Brayton, Eli Tomac, Ryan Dungey, and Trey Canard line up for the 450 main in Indianapolis.

The loose dirt in Indianapolis last week made for an exciting race. Ryan Dungey has shown technical perfection all season, but in Indy he make mistakes. Ken Roczen has been putting  pressure on Dungey since the main event in Santa Clara. In Indy he was able to capitalize on a mistake by Dungey leading to an intense back and forth race between the two. Unfortunately, Roczen came up short on the landing off the dragon back before the finish, allowing Dungey to pass. Jason Anderson got a distant third between him and the two leaders.

Ryan Dungey has a comfortable 45 points ahead of Roczen with four races left in the season. That means Dungey has just about a two race lead. It is fair to say that odds are in his favor for the championship, but as always, anything can happen. If he does win the championship, it will be his first consecutive championship in either Supercross and motocross.

Aaron Plessinger is the fifth different winner in the 250 East class this season. His win in Indy put him second in points after his teammate, Jeremy Martin DNFed. While Jeremy Martin and Martin Davalos had a rough night in Indianapolis, Malcolm Stewart held onto second place. Kawasaki received their first podium on the East with rookie, Gannon Audette. 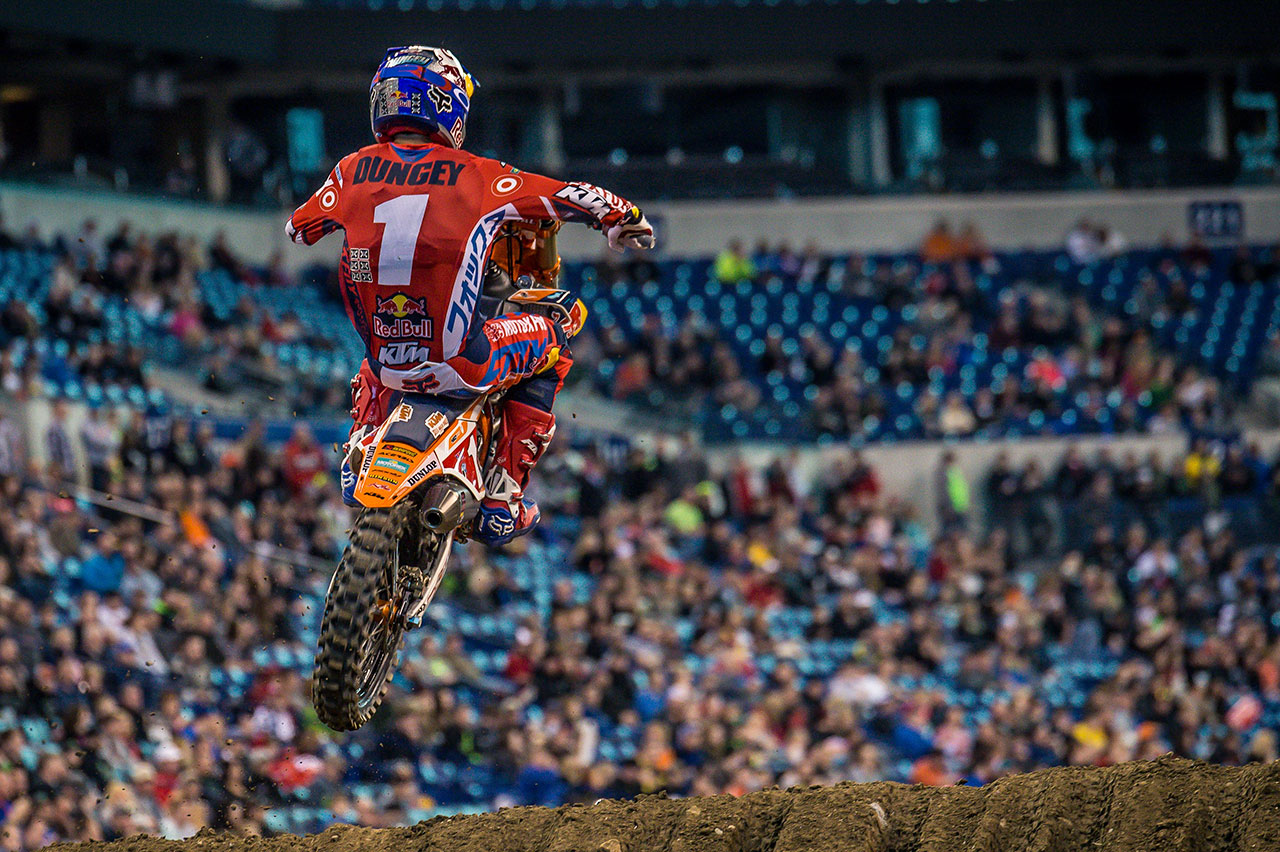 Ryan Dungey now has 29 straight podiums. He is likely to make it an even 30 this Saturday. Martin Davalos had a bad crash in Indianapolis, but will return for St. Louis.

Marvin Musquin – Wrist injury from Santa Clara’s practice crash.
Tommy Hahn – Injured foot. He should return in St. Louis.
Ronnie Stewart – Recovered from a broken wrist. Should return in St. Louis.
Cole Seely – Chipped his C7 vertebra.
Davi Millsaps – Broken ribs and a collapsed lung.
Wil Hahn – Broken collarbone, torn labrum and a broken scapula.
Andrew Short – Concussion from the three-way crash between him Wil Hahn and Phil Nicoletti. Retiring after this season.
Kyle Chisholm – Recovering from a broken humerus, dislocated shoulder and concussion.
Dusty Pipes – Like Chisholm, he is recovering from both a broken humerus and dislocated shoulder.
Tyler Enticknap – Broke his thumb at the first San Diego round.
Tevin Tapia – Broken wrist from preseason still healing.
Dean Wilson – Out for the 2016 season with a torn ACL and meniscus.
Adam Enticknap – Out for the season due to a broken femur.

Kyle Cunningham – Broken wrist.
Justin Hill – Concussion.
Arnaud Tonus – Dislocated shoulder.
Marshal Weltin- Dislocated shoulder.
Nick Gaines – Out of the 2016 Supercross season with a broken femur.
Adam Cianciarulo – Still recovering from a broken wrist, although he si getting ready for outdoors.
Jordan Smith – Injured shoulder.
Zach Bell – Still healing from a broken collarbone, but may not finish the 250 West series if his infection isn’t taken care of.
Jessy Nelson – Out of Supercross with a shoulder/back injury and concussion.
Luke Clout – Out of with a broken femur.
Mark Worth – He dislocated a hip and broke his elbow on the first lap of practice at Anaheim 1.
Daniel Baker – Done for the 2016 Supercross season after tearing his ankle.
Josh Osby – Broke some ribs and punctured a lung.