A: Not really. Why not? Husqvarna made a boatload of changes to the 2019 Husqvarna TC125, making the need for changes in 2020 less necessary. At 192.5 pounds the Husky TC125 and its KTM 125SX brother are the lightest full-size bikes made. The lightness can be felt from the garage to the checkered flag.Q: WHAT WERE THE CHANGES THAT HUSQVARNA MADE TO THE TC125 LAST YEAR?

A: For the 2019 model year, there were updates to the frame, airbox, swingarm, bodywork, seat shape, transmission, fuel tank and suspension components. Additionally, the engine and exhaust were refined for 2019. Here are the top eleven 2019 changes.

(1) Frame. The frame geometry was unchanged for 2019, but torsional stiffness was increased by 10 percent and longitudinal stiffness by 2 percent.

(2) Subframe. The subframe is 40mm longer and lighter.

(3) Engine. The 2019 cylinder got a new layout for the exhaust port, and the upper corner of the port was CNC milled to ensure more accurate port timing. Husqvarna also reinforced the seat of the kickstarter’s intermediate gear for reliability purposes. The clutch cover was narrowed to make the engine 10mm narrower.

(4) Clutch. The 2019 TC125 got the new-model DS clutch. It has a cup-shaped Belleville washer instead of five coil springs. (5) Seat. The seat got more foam in the middle of the saddle to create a flatter, rounder and taller seat.

(6) Fuel tank. The polyethylene tank was been redesigned, although it still has the same 1.85-gallon capacity.

(7) Exhaust. The pipe was manufactured using 3-D stamping technology to get an optimized shape. The molded plastic silencer hanger bracket from 2018 was changed to an old-school welded aluminum bracket.

(8) Swingarm. In 2019 the swingarm axle plates were lengthened 5mm to allow the rear wheel to be moved rearward.

(9) Suspension. The fork’s piston rods, rebound spring and guide springs were revised. The top clamp was widened 5mm to the front for more rigidity.

(10) Radiators. The radiators were mounted 12mm lower and the crossover tube was 4mm larger. The radiator holds 11 percent more coolant.

(11) Bodywork. The plastic was radically changed on the 2019 TC125. The most noticeable change was to the rear number plates, which, for some unknown reason, were split into two sections, with the bottom half made from gray plastic. The radiator wings, seat and contact points to the bike were narrowed.

A: Very little. The suspension components were updated, which included a name change from AER forks to XACT forks. When push comes to shove, what differentiates the 2020 TC125 from a 2019 TC125 are the internal damping changes in both the forks and shock. A: It would be inaccurate to say that the TC125 and 125SX are identical, but no one will slap you upside the head for thinking it, because they both are based on KTM’s platform-sharing philosophy. There are actually 10 differences.

(1) Clutch. Although the DS clutch parts are the same as on the KTM 125, the Husqvarna TC125 clutch is activated by a Magura master cylinder and clutch slave unit. KTM uses Brembo parts.

(2) Brakes. Both the Husky and KTM use Brembo master cylinders and calipers, but Husqvarna uses Husqvarna-branded rotors from an outside source (most likely GSK), while the KTM 125SX has Galfer rotors.

(3) Rims. The Husqvarna is spec’ed with D.I.D DirtStar rims, while the KTM has Takasago Excel rims.

(4) Seat. The TC125 comes with a slightly taller seat height, most likely a byproduct of the plastic airbox/subframe, and the Husky seat cover is blue and has a pyramid texture. KTM uses a black seat cover with a cowhide-replica texture and raised lines. (6) Clutch cover. Husqvarna gets a bronze-colored clutch cover with the Husqvarna gun-sight logo in raised lettering, while the KTM has a raw aluminum look and a dimpled texture with a small KTM logo.

(7) Silencer. The Husky TC125 silencer is black anodized, while the KTM muffler is raw aluminum.

(10) Plastic. All of the plastic pieces, including the front number plate, gas tank, radiator wings, fenders, frame guards airbox/subframe and side panels are brand-specific. Q: HOW DOES IT RUN ON THE TRACK?

A: This isn’t anything like the powerbands of the “Big Four” 125s, and that includes the only remaining Japanese-built 125—the YZ125. It is much, much better. Everything about the Husky TC125 is strong, even the bottom-end power delivery is acceptable. Granted, you won’t be torquing out of corners as on a Husqvarna FC250 four-stroke, but with proper clutch usage, gear selection and throttle control, the TC125 can jump up on the pipe quickly.

Where you shift, when you shift, and how aggressive your right wrist is will be the biggest factors in making the most of the TC125’s weak spot in the powerband. It’s no secret that the KTM 125SX is more responsive from low-to-mid, thanks to its freer breathing airbox. Husqvarna’s molded plastic/carbon airbox put a damper on throttle response until the rpm climbed into the meat of the powerband.

The Husky’s slightly muted low-end power isn’t a deal breaker, because you don’t buy a 125cc two-stroke to chug around corners at 6000 rpm. It works best in its sweet spot, which is from 9000 rpm to 11,500 rpm. You must ride the TC125 like a traditional 125cc engine. That means flat out in the upper rpm range.

Q: HOW IS THE MIKUNI TMX CARBURETOR?

A: The switch from the Keihin PWK 38mm carb to the Mikuni TMX 38mm carb in 2018 did not go smoothly for the Mattighofen-built two-strokes. We loved the pre-2018 Keihin carb, largely because we had a decade to work out its jetting kinks. The Husky’s engineers have only had three years to iron out the Mikuni’s kinks—and given the hole they started in back in 2018, they have come a long way baby.

The Mikuni carb was very difficult to tune on the TC125 in 2018. Husqvarna spec’ed the carb to run on a 60:1 pre-mix ratio. We have no clue why, and neither did they, because in 2019, the TC125 went back to a recommended 40:1 pre-mix ratio, with a bigger main jet and different needle. The jetting changes were a big plus. After three years of chasing the optimal jetting, Husqvarna got it right in 2020. The 2020 Husqvarna TC125 runs clean with the stock jetting at our SoCal tracks. It was a nice change to be able to put in laps rather than changing brass every time there was a change in temperature or elevation. We did run a percentage of race gas when we hopped-up the TC125. (1) Side plates. We don’t like the two-piece side plates. They serve no real purpose and require two-piece number plate backgrounds while leaving a Grand Canyon-size gap.

(3) Airbox. We are positive that we could get better throttle response and more horsepower if the airbox breathed better. The Husky two-strokes don’t come with the optional vented airbox cover, so we drilled holes to get some air into the engine.

(4) Graphics. The radiator wing graphics look like the mechanic slipped while putting them on.

(5) Airbox cover. Removing the airbox cover is a hassle. The plastic panel is too long and too hard to grab hold of and too difficult to pry open. We stick a T-handle in the back and pop it open.

(6) Blue frame. The blue frame looks old and weathered on the showroom floor. (1) Weight. This bike feels light. That’s because it weighs closer to 190 pounds than 200 pounds.

(3) Air-filter cage. Even a home-schooled AMA Pro can install the Husky air filter right side up.

(4) Hydraulic clutch. Husqvarna’s self-adjusting Magura clutch is awesome. Go ahead and abuse it. It can take whatever you can dish out.

(5) Engine. This small but mighty engine puts out some serious power.

(6) Suspension. The WP suspension components have always worked well on the TC125—and they still do.

(7) Handling. The TC125 blends terrific frame geometry with a sub-200-pound chassis. It can do anything and go anywhere.

(8) Clutch. The steel-basket diaphragm-spring clutch can take all the abuse a hot-shot two-stroke racer can hand out. 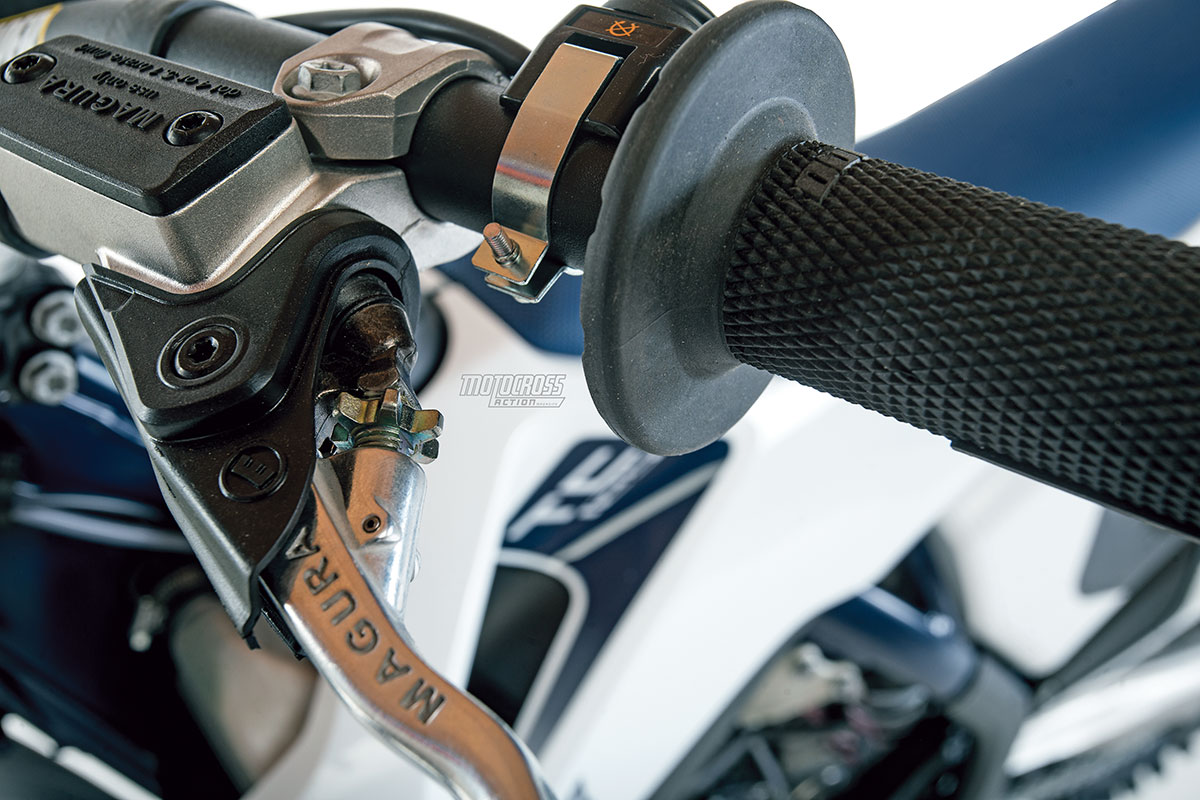 A: You might be surprised to know that even though the KTM 125SX runs sharper from low-to-mid, most MXA test riders preferred the 2020 Husky TC125 over the KTM 125SX. Although a little hesitant off the mark, the Husqvarna powerband felt broader and more manageable to every MXA test rider below Pro.

This is how we set up our 2020 Husqvarna TC125 for racing. We offer it as a guide to help you find your own sweet spot. WP XACT FORK SETTINGS
Although the Husqvarna TC125 and KTM 125SX run the same WP XACT forks, they are not identical to the forks on the Austrian four-strokes. The FC250’s, FC350’s and FC450’s XACT forks are equipped with a mid-valve, but the two-stroke forks don’t use a mid-valve. Why not? The added restriction of the mid-valve creates excessive damping that was too much for the light weight of the smokers. You would think that leaving out a major component would hurt the TC125 fork’s performance, but it doesn’t. Why not? Because the TC125 has fewer horsepower, less weight and a more agile feel, the two-stroke forks work as well or better than the four-stroke forks. These are the settings we ran on our 2020 Husqvarna TC125 (stock settings in parentheses):
Air pressure: 120 psi or 8.3 bar
Compression: 12 clicks out
Rebound: 12 clicks out
Fork-leg height: Third line
Notes: Bleed both of the air screws on the top of the forks. Don’t be afraid to change the air pressure to suit your weight, speed and track conditions.

WP SHOCK SETTINGS
After we set sag at 106mm, most riders didn’t change a thing. These are the settings we ran on our 2020 Husqvarna TC125 (stock settings in parentheses):
Spring rate: 39 N/m
Race sag: 105mm
Hi-compression: 1.5 turns out
Lo-compression: 15 clicks out
Rebound: 15 clicks out
Notes: The stock shock settings are in the ballpark, but test riders often changed the race sag to suit track conditions, dropping the rear end on fast tracks and raising it on tight tracks.