WHAT IS IT? The Yoshimura RS-4D uses the same basic design and dimensions as their standard RS-4 system, but with the addition of a unique dual-core muffler design.

WHAT STANDS OUT? Here’s a list of things that stand out with the Yoshimura CRF450 RS-4D exhaust.

(1) Development. Yoshimura is the official exhaust supplier to Team Suzuki and Team Honda, which gives them a leg up in the R&D area because they get to use factory riders and mechanics to finalize their specs.

(2) Concept. Unlike all other exhaust systems and the Yoshimura RS-4, the RS-4D uses two perforated cores inside the muffler canister instead of the traditional single core. Yoshimura believes that the greater surface area of the dual-exhaust outlets allow the exhaust gases to breathe easier and quicker (in much the way that five-valve cylinder heads have more valve area than four-valve heads). Yoshimura’s duplex chamber design maximizes internal muffler volume while minimizing the overall size of the muffler. The chamber is also claimed to act as a secondary mechanical baffle to reduce sound without impeding exhaust flow. The MXA test crew has to be skeptical because the factory race teams haven’t swung 100 percent over to the dual-core RS-4D (for example, Ryan Dungey ran the RS-4 on last year’s Suzuki, while Brett Metcalfe used the RS-4D).

(3) Performance. When Honda switched to its 100mm-longer muffler and reduced the core size to 25mm for the 2011-12 model year, they developed a unique ECU engine mapping designed to work with their restrictive stock pipe. This mapping makes the 2011?2012 Honda CRF450 a challenge to pipe builders (unless they remap the ECU). Not so with Yoshimura. The RS-4D is an amazingly good exhaust system?and it requires no mapping to get it to work. Every test rider raved about how the Yoshimura RS-4D didn’t hurt Honda’s mellow and easy-to-use low-to-mid transition, while blasting off at 8000 rpm to the tune of three more horsepower (from 8500 rpm to 9500 rpm). Peak horsepower went up 2.2 horsepower, and best of all, the resonating blurber that the CRF450 has after 8500 rpm is smoothed out thanks to better throttle response and a quicker turnover. This is a terrific pipe. 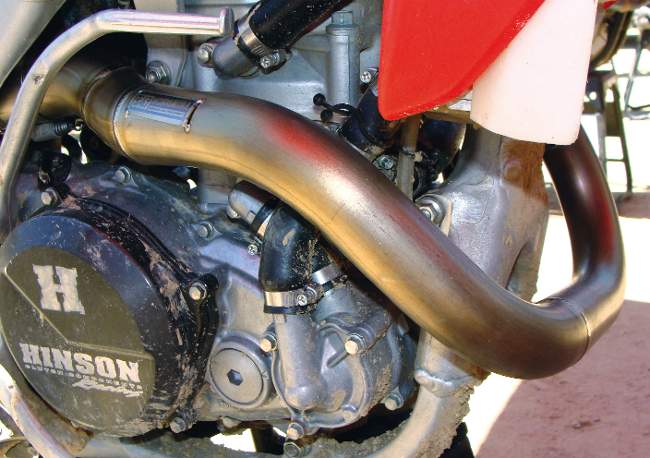 (4) Sound test. We read the press clippings about how the dual-core RS-4D muffler would “act as a secondary mechanical baffle to reduce sound,” but that isn’t what we experienced. Our full-race RS-4D didn’t pass the AMA’s 94dB test or even come close to the FIM’s two-meter-max test. It is loud?especially in comparison to the quiet CRF450 stock muffler.

WHAT’S THE SQUAWK? Two quibbles: (1) It is loud, but for closed-course racing it is acceptable. (2) Because it is only offered in titanium and titanium/carbon mixes, it is expensive. The dual-core muffler obviously raises the cost and the complexity of assembly.

From a performance standpoint, we’d give the Yoshimura RS-4D five stars, but because it is louder than it should be and breaks the $1000 barrier, we took a star away. If you are rich and deaf, we’ll give you the star back.