THE BEST OF JODY’S BOX BOX: WE DIDN’T KNOW HOW GOOD WE HAD IT Jody on his 1972 Maico navigating the snow fence forest of Lake Whitney.

I’m not sure that modern teenagers feel the same way about motocross as the original generation did. In the 1970s, we absorbed the culture of motocross and carried it with us everywhere we went. There was no well-established cultural history to guide us. In short, there were no “good old days.” The oldest racer I knew back then was 25 years old, and I thought he was a relic of the past.

When I told my father that I planned to be a professional motocross racer, he said, “That’s not a sport.” He was right. At that time, motocross was not a sport that anyone in America had ever heard of. Motorcycles to mid-America circa 1970 could be summed up in these popular song lyrics: “He wore black denim trousers and motorcycle boots and a black leather jacket with an eagle on the back. He had a hopped-up ’sicle that took off like a gun. That fool was the terror of Highway 101.”

WHY SUGARCOAT IT?! THEY CARE LITTLE ABOUT ANYTHING THAT CAME BEFORE IPHONES, INSTAGRAM, SNAPCHAT AND EARRINGS.
NO SHAME. NO SWEAT. NO WORRIES.

Today’s racers give little thought to the roots of our sport. Why sugarcoat it?! They care little about anything that came before iPhones, Instagram, Snapchat and earrings. No shame. No sweat. No worries. They know what they know—and nothing more. Motocross, as they know it, is as it is—fully grown and developed. Good for them.

But, it was that original generation who developed the sport into what it is today. They had to, because it didn’t exist before them. For most 1970s racers, motocross was rebellion squared. It offered what was unobtainable to that era’s teenagers—a sense of motion, speed, gravity defying lunges and catapulting crashes. It belonged to a very select group of American youth. There were no old people in motocross in the formative days. There were no Vet classes, no old-timers, no grizzled old hands, no adults. We were young, and we could make motocross whatever we wanted, because no one came before us. And no high-risk sport was as readily available to teenagers before 1968.

The strange thing is that a motocrosser from today wouldn’t be accepted in the motocross world of the late ’60s and early ’70s. He’d be rejected for his materialism, greed, professionalism, mechanical ineptitude and haughty ways.

WE HAD NO CHOICE BECAUSE BACK IN THE DAY, THERE WASN’T A GIANT INFRASTRUCTURE PUMPING OUT MAINTENANCE-FREE MOTORCYCLES
—NAY, MAKE THAT MAINTENANCE-RESISTANT MOTORCYCLES. 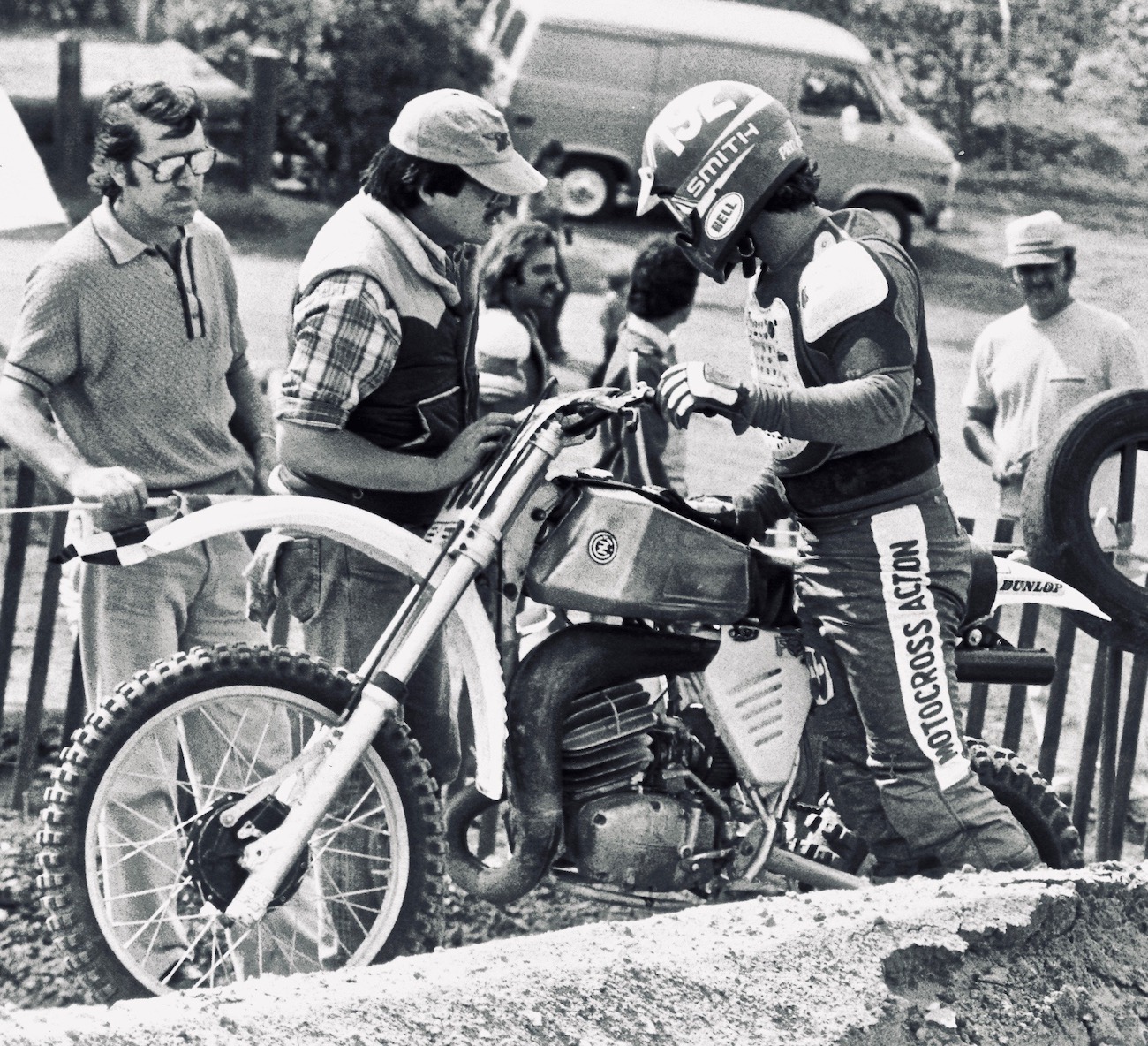 Jody stops for mechanical help at Saddleback in 1982. The bike looks like a CZ and some of it is, but the CZ engine and tank are in a Husqvarna twin-shock frame modified into a single shock design. You don’t see much of that at the races today.

For the first three decades of the sport (1968–1998), motocross racers had a love affair with their sport and its bikes. It was a world populated by gear-heads, tinkerers, inventors and young rebels who needed each other in a symbiotic way that doesn’t exist today. We bought secondhand bikes, rebuilt them with rudimentary tools and, if we couldn’t afford a part, we tried to build it ourselves. We had no choice. There wasn’t a giant infrastructure pumping out maintenance-free motorcycles—nay, make that maintenance-resistant motorcycles. Everybody who raced back in the 1970s worked on their own bikes because they had no choice—plus, the bikes could still be worked on.

Strangely, all these years later, the economic engine of the motocross business is still fueled by the undying devotion of these same teenagers — who are now middle-aged. Our sport does not depend on high-paid factory riders. It depends on 40-, 50- and 60-year-olds. Why is the graying of motocross so significant and dangerous? Because it is obvious that the motorcycles produced in the modern era don’t engender the same kind of emotional attachment as the earlier era. Modern bikes are soulless. And without that essence of oneness between racer and machine, the digital, electronic and fleeting experiences of today will lack the lasting intensity of the 1970s, 1980s and 1990s. That’s a shame.

THIS WEEK’S BIRTHDAY BOYS: JEFF WARD IS 59—YOU KNOW WHAT COMES NEXT YEAR