It’s no secret that we were disappointed with the 2011 KTM 350SXF. It wasn’t bad; it just wasn’t what we expected. We knew we could embrace the 350cc design philosophy if it were executed properly, because the Austrian company’s basic idea is sound: produce a mid-size, Open-class engine and tuck it into a lightweight 250cc chassis. The ideal 350cc motocross bike should produce around 50 horsepower and weigh 222 pounds. The resulting power-to-weight ratio would make it the ultimate motocross weapon. It sounded good when it was originally suggested by AMA supremo Steve Whitelock five years ago–and it still sounds good today. But, sadly, after three years of KTM 350SXF production, they aren’t as close to the ultimate motocross weapon as we hoped to be.

YES, WE KNOW THAT KTM HAS BEEN MAKING PROGRESS WITH THE 350SXF, BUT IT ISN’T NECESSARILY PROGRESS IN THE RIGHT DIRECTION. THE FIRST VERSION WAS OVERLY RICH, NOT ESPECIALLY FAST AND OBESELY OVERWEIGHT.

Yes, we know that KTM has been making progress with the 350SXF, but it isn’t necessarily progress in the right direction. The first version of the KTM 350SXF was introduced in 2011. It was overly rich, not especially fast and obesely overweight. Making matters worse was a top-end-only powerband that pumped out a meager 46.94 horsepower at a skyscraper 12,200 rpm. You didn’t need to be Sherlock Holmes to realize that buyers were expecting a mid-sized 450, not an oversized 250. Not a single MXA test rider had the patience to wait for the 350cc engine to lollygag its way up to the upper reaches of the rpm curve, nor did we think that the power-to-weight ratio was helped by the 237-pound weight. It looks nice with its custom graphics and orange seat cover, but it’s what you can’t see that makes the difference.

The 2012 KTM 350SXF was significantly faster, largely because KTM remapped it to make the engine 3 percent leaner from low to mid and 2 percent leaner from mid to top. The ignition timing was also advanced (approximately 2 degrees). The result was a 2-horsepower gain from 9000 rpm to 12,000 rpm. That extra horsepower made the midrange more usable, even though peak still remained at 12,200 rpm and the weight didn’t change. For a $650 investment we gained an average of 2-1/2 horsepower, but, more importantly, we brought the power down in the powerband.

THE MXA WRECKING CREW DOESN’T WANT TO WAIT ANOTHER COUPLE YEARS FOR KTM’S ENGINEERS TO BABY-STEP THE POWERBAND DOWN TO WHERE IT WOULD BE MORE USABLE.

But these incremental steps are taking forever. The MXA wrecking crew doesn’t want to wait another couple years for KTM’s engineers to baby-step the powerband and weight down to where it would be more usable. It is important to note that on the sales front, KTM’s 350cc experiment has been a big success. Play riders, trail riders and cross-country racers have embraced the 350SXF/XCF. Yet, we can’t help but wonder how many more bikes KTM would have sold if the three-year run of KTM 350SXFs had been true to the original design philosophy from the start.

The MXA wrecking had a simple plan. If we couldn’t get KTM to make a torquey, broad and usable powerband, perhaps we could do it ourselves. How so? With cubic centimeters. The MXA wrecking crew has tested a wide variety of big-bore KTM 350SXFs, some as small as 380cc and some as large as 400cc, but none that we would recommend. We didn’t need to go displacement crazy. We weren’t looking for grunt; instead, we wanted more power in the right places. 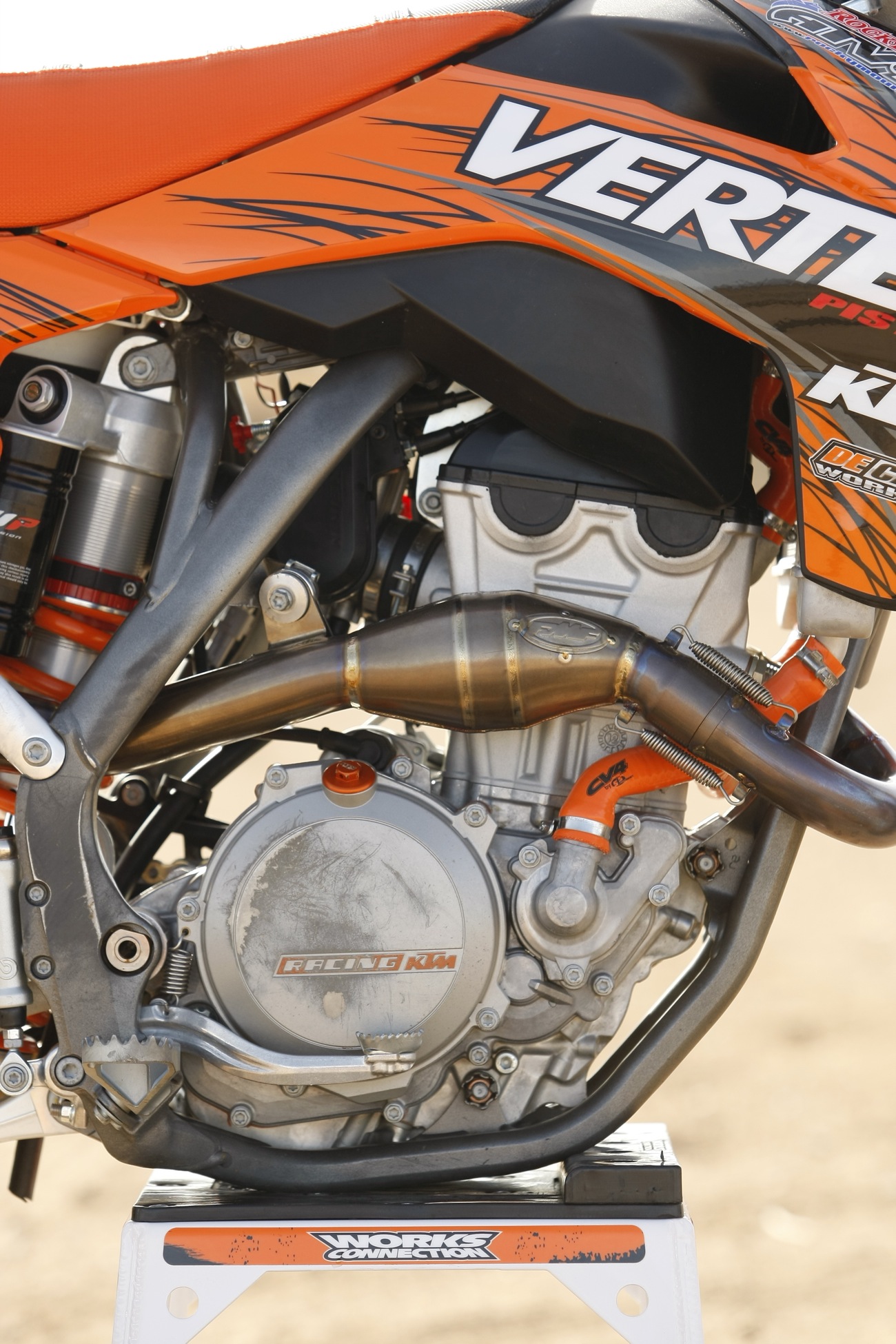 The FMF Factory 4.1 added hit on the front side, but we were surprised that the 365 ran just as well with the stock pipe.

This is where Cylinder Works’ KTM 365cc kit comes in. For $649.95, you get a brand-new cylinder, 2mm-larger Vertex piston and a Cometic gasket kit. It is a bolt-on kit that ups the bore and stroke from 88mm by 57.5mm to 90mm by 57.5mm. All you have to do is remove the stock parts, slip the new cylinder and piston on, and drop the head back into place. By four-stroke standards, this is the simplest big-bore mod known to man.

WE STARTED OUR TEST WITH HIGH HOPES, BUT AFTER LESS-THAN-SUCCESSFUL TESTS OF 380cc AND 400cc KITTED ENGINES, WE STILL CROSSED OUR FINGERS. WE DIDN’T NEED TO.

What else did we do to our KTM 350SXF to turn it into a KTM 365SXF? In truth, we did nothing. Well, we did or undid four things:

(1) Pipe.
We had already exchanged the stock exhaust on our 350SXF for an FMF Factory 4.1 RCT MegaBomb exhaust system, so we just left it on the bike.

(3) Miscellaneous.
DeCal Works supplied the graphics. Dunlop provided the tires (an MX31 on the front and MX51 on the rear), and MotoSeat provided the seat cover. We typically gear the KTM 350SXF down by going one larger on the rear sprocket, but with the extra oomph of 15cc, we put on stock-size Renthal sprockets (front and rear).

(4) Map.
The KTM comes with three maps already installed, and these maps worked well in 2011 and 2012 with the 365 kit. But, they didn’t work with the 2013, 2014 and 2015 models. It turns out that all the leaning of the mixture that KTM’s engineers have been doing over the last couple years to maximize the 350cc powerband made the fuel mapping too lean for the big-bore Cylinder Works kit. We had to use KTM’s reprogramming tool to richen the mixture by 4 percent. Cylinder Works provides our map on their website (see the map and a link at the bottom of this page). The stock 350SXF runs like a big 250, but the 365 kit turned it into a mid-sized Open bike. That is what we expected in the first place.

We started our test with high hopes, but after less-than-successful tests of 380cc and 400cc kitted engines, we still crossed our fingers. We didn’t need to. The 365 was a test-rider hit. We ran it back to back against a stock 350SXF (with the stock exhaust and with the FMF Factory 4.1). Either way, it was awesome. The FMF pipe gave us a little more midrange compared to the stock exhaust, but both systems on the 365 blew the stock 350SXF away.

Suddenly, we weren’t having to go flat out to get the most out of the powerband. We could short-shift, we could rev it, we could lollygag around in the lower rpm, and we could run with 450 four-strokes without having to hang on for dear life.

With the FMF pipe, the KTM was stronger on the front end of the powerband by an average of 2.5 horsepower. We were a little surprised that the FMF didn’t run stronger on top, but when you are pushing a big piston, the first thing to go is top-end power.

Paradoxically, when the KTM 365 kit was mated to the stock exhaust system, it ran almost as well as with the FMF exhaust at 7000 rpm, 8000 rpm, 9000 rpm and 10,000 rpm, but pulled better on top. The surprise was that the 365SXF actually revved better with the stock exhaust than it did as a stock 350cc engine. What did we learn? This kit likes both the FMF and the stock exhaust. There are gains to be made with both, which means that you don’t have to invest in an exhaust if you don’t want to.

The only glitch in the 365SXF’s giddy-up was that we had to remap it to make it 4 percent richer for the extra displacement. You can find the map on the Cylinder Works website.

On the dyno, the Cylinder Works 365SXF was superb. Our dyno runs of the stock KTM 350SXF, the KTM 365 (with the FMF exhaust) and the 365 (with the stock exhaust) revealed several interesting facts.

(4) Top end.
We expected the 365 kit to suffer on top, because that is what happens with big-bore engines. With the FMF pipe, the 365 was half a horse down to the stock 350 at 11,000 rpm, while the 365 with the stock pipe was up three-fourths of a horse. This weird pattern held true at 12,000 rpm, with the stocker beating the FMF pipe by one horse but losing to the 365 with the stock pipe by a fourth of a horse. No test riders took the horsepower numbers at 12,000 rpm seriously, because the 365 got its work done lower in the powerband and with more gusto than the 350 from 6000 to 10,000 rpm. We can’t gush enough about what this low-cost big-bore kit does for the KTM 350SXF. It allows it to live up to its original promise. Now, if we could just find a way to shave off about 14 pounds.

For the new map go to www.cylinder-works.com/LearningResources.aspx?ItemID=597&page=2